A Surprise from Oxyrhynchus: 069, a Fragment of Mark

Although the Byzantine Text of the Gospels is normally supported by about 85% (or more) of the extant Greek manuscripts at any given point, lists of the early Greek manuscript support for the Byzantine Text of the Gospels typically are very short, consisting mainly of Codex A (02, Alexandrinus) and (in Matthew, and in Luke ) Codex W (032, Washingtoniensis), with some support from Codex C (04, Ephraimi Rescriptus).  Their testimony is often reinforced by the Gothic version and the Peshitta.  Later, in the early 500’s, comes the testimony of the Purple Uncials (N, O, Σ, Φ).  This testimony for the Byzantine Text is augmented by some patristic evidence from Cyril of Jerusalem, Gregory of Nyssa, John Chrysostom, and others.  But are there any more manuscripts from this period that support the Byzantine Text – anything at all?
Yes, there are.  One of them is 069, a small fragment from the Gospel of Mark.  069 was the third item listed by Grenfell & Hunt when they began publishing the results of the excavations conducted at .  The text of 069 agrees perfectly with the text printed in 2005 by Robinson and Pierpont in The New Testament in the Original Greek - Byzantine Textform.  It was printed in Oxyrhynchus Papyri - Volume One, on pages 7-8.  Grenfell and Hunt described this fragment more or less like this: 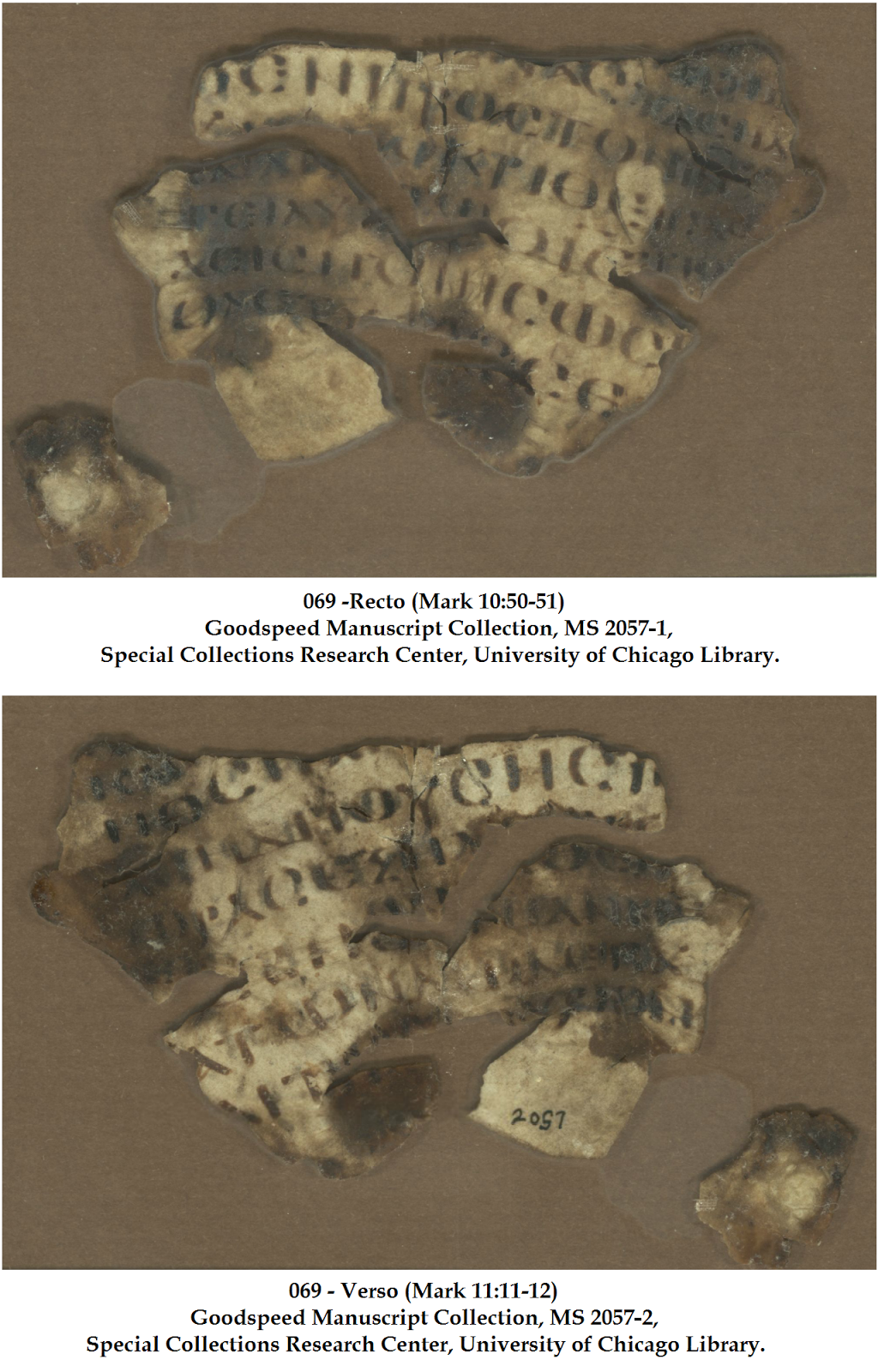 St. Mark’s Gospel – 10:50-51, -12
4.5 x 8.3 cm
Fragment of an early vellum codex containing part of St. Mark 10:50-51, -12, in a calligraphic uncial hand, probably of the fifth or sixth century.  The manuscript to which the fragment belonged was of the same class as Codex Alexandrinus, and the part preserved agrees with the Textus Receptus.

When Codex W was discovered, it demonstrated that the Byzantine Text of the Gospel of Matthew and Luke was known in Egypt in late 300’s/early 400’s.  The testimony of 069 has been overshadowed by W’s more famous and more substantial testimony, but 069 still should be noticed as a witness from the late 400’s or early 500’s to the existence of the Byzantine Text of Mark in .

069 was given to the in the early 1900’s – one of the perks of the investment the university had made in Grenfell & Hunt’s excavation-work.  It is currently housed at the , as collection #2057.  Images of the manuscript are online at the website of the Goodspeed Manuscript Collection – one of the very first world-class collections of New Testament manuscripts that became accessible online.

As I mentioned before, the text of 069 agrees perfectly with the Byzantine Text.  Here is a list of its disagreements with the chief Greek representatives of other text-types.

As I have mentioned elsewhere on this blog, 0171 also supports the Byzantine Text, primarily in its inclusion of the "Western non-Interpolation" of Luke 22:43-44. Ironically, the Alands categorize it as "an early (secondary?) form of the D text" a (which ms Larry Hurtado [https://larryhurtado.files.wordpress.com/2018/01/second-third-century-christian-texts.pdf] inaccurately lists as containing Matthew 10:17-23,25,32 and Luke 22:54-56,62,64). The Wikipedia page for 0171 shows photos and transcriptions of the actual text of all three fragments of 0171, for those who can't trust the word of an eminent NT scholar on something as basic as the contents of a NT manuscript.
I am among those who edited 0171's transcription. Anyone is free to check it against the photos.