In Pigeon Forge, Tennessee (specifically at 135 East Wears Valley Road, Suite 1), near the Ammo Outlet store) there is a nice little place called the Tennessee Bible Museum. where curator Gene Albert  Jr. offers tours of assorted antiquities and other items that teach how people in America got their Bible.  There is also a store where old Bibles, and books about the Bible (plus various knick-knacks) can be purchased (including Larry Stone's excellent The Story of the Bible).

Here is a brief photo-gallery showing a little of what tour-takers and store-explorers at the Tennessee Bible Museum can expect to encounter. 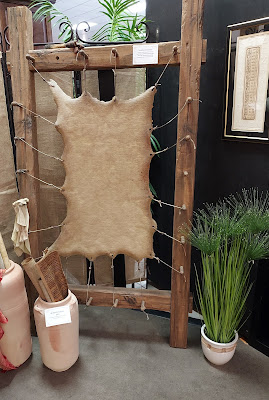 A replica of the ancient means of turning a piece of animal-skin into a piece of parchment.  Also in the picture:  jars modeled after the jars in which some of the Dead Sea Scrolls were found, and reeds of the papyrus plant.
Curator Gene Albert Jr. shows an example of the workspace of a medieval scribe, with several related items.  Jan Hus is pictured on the desk, with a quote:  "Therefore, faithful Christian, seek the truth, listen to the truth, learn the truth, love the truth, tell the truth, learn the truth, defend the truth even to death."
(You might wonder, "Why is "learn the truth" in there twice?"  I think the quotation, as written by Hus in Opera Omnia, uses two different words; the second one can also be rendered as "adhere to the truth.")
The Tennessee Bible Museum has an collection of many facsimiles of editions of the Bible that have had historical significance.  I'm sure I saw a facsimile of Codex Sinaiticus in the store, as well as a multi-volume facsimile of the Complutensian Polyglot, and a facsimile of the 1611 King James Bible.  Not a facsimile:  this copy of Living Oracles, from 1826. 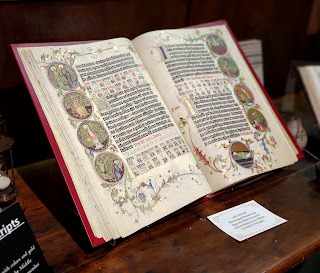 This facsimile of an illuminated Latin manuscript from the 1400s shows the artistic craftmanship that could be invested in their illustrations and marginal flourishes.  Much (but not all) of the kind of art shown here gradually became a lost art after Gutenburg invented the printing press.
One of the oldest manuscripts in the exhibit is a Latin antiphonary (songbook).  The lyrics of many of the songs it contains are from the Bible. 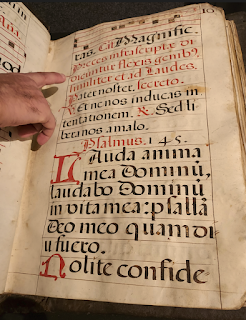 Modern-day Bibles and Bible-related items are also in the Tennessee Bible Museum, including the "Nano Bible" - a very small Bible on microfilm - and the Lunar Bible, the first Scriptures to ever be taken to the moon.  There are also Bibles that were owned by famous individuals, such as Billy Sunday, George Bush, and Donald Trump.
The Tennessee Bible Museum is worth a visit if you're ever traveling to Pigeon Forge, TN!
Posted by James Snapp Jr at 10:33 PM 1 comment:

For decades, commentators on the Gospel of Mark have mentioned that there is an alternative ending to the Gospel of Mark (that is, an alternate after verse 8 that does not involve verses 9-20).  The ESV presents this alternative ending, which is known as the “Shorter Ending,” in a footnote, attributing it to “some manuscripts” – “But they reported briefly to Peter and those with him all that they had been told.  And after this, Jesus himself sent out by means of them, from east to west, the sacred and inperishable proclamation of eternal salvation.”

The Double Ending is also attested in quite a few versional copies:

Many Ethiopic copies (at least 131 – as described by Bruce Metzger in 1980 in “The Gospel of St. Mark in Ethiopic Manuscripts,” in New Testament Tools and Studies, Vol. 10; in the course of this study Metzger withdrew the well-circulated claim that a number of Ethiopic copies conclude Mark’s text at 16:8 – although the false claim can still be found in some sources, including p. 322 of the fourth edition (2005) of Metzger’s The Text of the New Testament, of which Bart Ehrman is named as a co-author).  (The corrected description of the Ethiopic evidence is on p. 120 of the same book.)

The Double Ending has also been found in a few representatives of the Harklean Syriac version (such as DFM 00829, a witness from the 1200s-1300s discovered by Mina Monier), and even in a copy of the Peshitta (British Library MS Add. 14456, as David Taylor has shown).

Old Latin Codex Bobbiensis (VL 1)  is the only witness to the Shorter Ending in which the Shorter Ending is not accompanied by at least part of the usual twelve verses 9-20 (which are supported by at least 1,650 Greek manuscripts, plus the non-extant manuscripts used by many patristic writers such as Tatian and Irenaeus in the 100s). (VL 1 also attests to an interesting interpolation between Mark 16:3 and 16:4, and does not attest to the final phrase of 16:8.  Its scribe also made various errors in the course of writing the Shorter Ending.)

There are slight variations in the text of these witnesses – mainly the presence or absence of the explicit reference to Jesus’ appearance (ο Ις εφανη in 044 and 274mg and Greek-Sahidic lectionary 1602, and Ις εφανη αυτοις in 099) and the presence or absence of a final Amen.  But today I shall overlook the interesting implications of these variants to focus on a recent discovery made by Mina Monier:  there are now eight Greek manuscripts (plus Greek-Sahidic lectionary 1602) that support the Double Ending (i.e., the Shorter Ending followed by verses 9-20):  the newly confirmed manuscripts are GA 1422 and GA 2937 .  GA 1422 is assigned to the 900s-1000s; GA 2937 is assigned to the 900s.

On folio 178v of GA 1422, alongside the text of the Gospel of Mark 16:7 (beginning with ὄτι προάγει) to 16:13 (up to and including λοιποῖς), the catena-commentary that frames the text on three sides refers to, and includes, the Shorter Ending.   Variants within the Shorter Ending in 1422’s commentary are: (1) the non-inclusion of ὁ before Ἰς), (2) the non-inclusion of ἐφάνη or ἐφάνη αὐτοῖς after Ἰς, and (3) ἀπ, rather than ἀπό, before ἀνατολῆς.

(One might suspect that the Shorter Ending that appears in the lower margin of GA 274 (below the text of Mark 16:6b-15, up to and including ἃπαντα κη-) was extracted from a commentary-manuscript such as 1422 or 2937, rather than from a commentary-free continuous-text manuscript.)


Following the Shorter Ending, 1422’s commentary has a note:  Εστι[ν] δε κ[αι] ταυτα φερόμενα μετα τὸ ἐφοβοῦντο γαρ.  This is the same note that introduces verse 9 in 019 (Codex L), 044 (Codex Ψ), 083, and Sahidic-Greek lectionary 1602.  Each member of this small cluster of manuscripts must be connected to the same transmission-stream from which this note emanated.

Mark 16:8 in GA 2937, meanwhile, is followed by – according to Mina Monier’s transcription – “ειχεν δε αυτας τρομος and several lines of commentary, concluding with Αυτη η υποθεσις οπιθεν εστι εις το “εφοβουντο γαρ:”  This is followed by the Shorter Ending, in a form which is nigh-identical to what is in 274mg.  And this is followed by – again following Monier’s transcription – “Eστι δε και ταυτα φερομενα μετα το εφοβουντο γαρ” (the same note that is in  019, 044, 083, 1422, and Greek-Sahidic lectionary 1602) – followed by “αναστας δε πρωϊ πρωτῃ σαββατον και τα εξης.”  More commentary-material (from Gregory of Nyssa, according to a rubric in the margin), which makes use of Mark 16:9-20, follows.

Notice that in 2937, ειχεν δε αυτας τρομος (that is, the second half of 16:8, with δε instead of γαρ) follows 16:8.  2937 shares this “rewound” feature with 099 and Sahidic-Greek lectionary 1602.  Thus, by sharing the note “Εστι[ν] δε κ[αι] ταυτα φερόμενα μετα τὸ ἐφοβοῦντο γαρ,” or by restarting Mark 16:8b before continuing with 16:9 (or both), all these witnesses to the Shorter Ending show that they belong to the same narrow transmission-line – which, by virtue of including Sahidic-Greek lectionary 1602, must have been in Egypt.

More information about GA 2937 can be found in the article Greek Manuscripts in Alexandria, by H.A.G. Houghton and Mina Monier, which appeared in Journal of Theological Studies, Vol. 71, Issue 1, April 2020, pp. 119-133.

[Readers are encouraged to explore the embedded links in this post.]