Video Lecture 22: The New Testament in the Marketplace 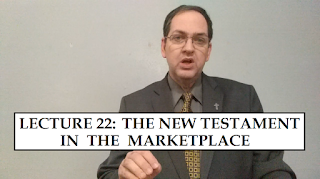 Here is an extract:

In 1971, the preface to the RSV was very candid in its criticism of the KJV.  It stated, “The King James Version has grave defects.”   It also stated that the Greek base-text of the New Testament in the KJV was “marred by mistakes containing the accumulated errors of fourteen centuries of manuscript copying.”  It stated that the King James Version’s base-text was essentially the text as edited by Beza in the late 1500s, and that Beza’s text closely followed the work of Erasmus, “which was based upon a few medieval manuscripts.”

This was technically true, but it is not the whole truth.  This incomplete caricature is still used in the promotion of several translations of the New Testament.  The King James Version is very frequently misrepresented, as if it is only supported by a smattering of late medieval manuscripts.  People are told that scholars today “Now possess many more ancient manuscripts of the New Testament” than were known in the 1500s.

Materials written to promote new versions routinely avoid drawing attention to the strong level of agreement between the Textus Receptus and the majority of Greek New Testament manuscripts.  It is not the Byzantine Text, but the Alexandrian Text, that routinely disagrees with over 90% of the Greek manuscripts.

But you would never realize this if you relied upon the marketing of modern Bible versions such as the New International Version.  Marketers of modern versions routinely describe the Nestle-Aland base-text as if it is based on very many ancient manuscripts.

Clearly the answer is no.   I have no doubt that Erasmus and Stephanus would agree.  But I am not convinced that they would agree that the need to refine their work justifies throwing out the Byzantine Text and replacing it with the Alexandrian Text, which is what is done by the NIV.  Misrepresentation of the quality and age of the Byzantine Text is a tactic that has been used in many attempts to get people to embrace the Alexandrian Text.  This was done in the 1800s, and it is still attempted today.

For example, Biblica, formerly known as the International Bible Society, has produced a video called “Is the NIV Bible Missing Verses,” which asks the question, “How did the KJV and other earlier Bibles end up having more words than ours do today?”.  Biblica’s presentation conveys that differences between English versions exist because the Biblical researchers in the 1500s only had a few manuscripts, which were not very early – but researchers today use many more manuscripts that are much more ancient.

Specifically, Biblica tells viewers that the main manuscripts used by the producers of the Textus Receptus were just a few hundred years old, only going back to the twelfth century.  In comparison, today’s scholars have “almost 6,000” manuscripts.  In addition, the manuscripts Codex Sinaiticus and Codex Vaticanus provide a “much earlier” text.

But viewers are not told that the text in the vast majority of those thousands of manuscripts is Byzantine, which means that in most textual contests where the Alexandrian and Byzantine forms disagree, they support the Byzantine reading, and disagree with the Alexandrian form.  In other words, they tend to oppose the base-text upon which the New International Version is based.

In addition, viewers are not told how soon the Byzantine readings are supported.  Instead, they are given the impression that their choice is between readings from the 300s, and readings from the 1100s, so, of course they will tend to prefer what they are led to believe is the reading with much earlier support.

(1) Matthew 17:21 is not in the text of the NIV.  It is supported by over 99% of the Greek manuscripts of Matthew, including Codex D and Codex W.  It is also supported by most of the Old Latin copies of Matthew including Codex Vercellensis.  It is supported by the Vulgate, and was cited by Origen, who died in the mid-200s – before Vaticanus and Sinaiticus.  Other patristic writers who used this verse include Hilary, Basil, Ambrose, Chrysostom, and Augustine, representing five different locales.

(3)  The second part of Matthew 20:16, “For many are called, but few are chosen,” is not in the text of the NIV.  It is supported by most Greek manuscripts of Matthew, including Codex D, and by the Vulgate, and the Peshitta, and it was used by Chrysostom.  An additional consideration is that the final letters of the final word in this phrase are the same as the final letters in the word that comes before this phrase, which could make the whole phrase vulnerable to accidental loss via periblepsis.

(4)  Matthew 23:14 is not in the text of the NIV.  It is supported by the majority of Greek manuscripts of Matthew, including Codex W.  It was quoted by Chrysostom, and is included in the Peshitta.  Another point to consider is the potential of this reading to be accidentally lost via periblepsis, because it begins with the same opening word as the verse before it, and the verse after it.

(5)  The last part of Mark 6:11 is not in the text of the NIV or the ESV.  It is supported by the vast majority of Greek manuscripts of Mark, including Codex Alexandrinus.  It is also supported by the Gothic version and the Peshitta.

(11)  Luke 23:17 is not in the text of the NIV.  It is included in most Greek manuscripts of Luke, including Codex Sinaiticus and Codex W.  It is supported by the Old Latin text, the Vulgate, and the Peshitta.

(12)  John 5:3-4 is not in the text of the NIV or the ESV.  It is included in most Greek manuscripts of John, including Codex Alexandrinus.  Tertullian, writing in about the year 200, seems to have used a text of John that has this reference to an angel at the pool of .  It inclusion is also supported by the Peshitta, and by Chrysostom in his Homily 36 on John.

More than nine times out of ten in the Gospels, where a verse or phrase is included in the King James Version but is not in the NIV, its inclusion is supported by the majority of Greek manuscripts, and support for the KJV’s reading can be seen in evidence from the 300s, the same century when Codex Vaticanus and Codex Sinaiticus were made.

It is simply not true that the verses and phrases that are supported by the Byzantine Text typically only appear in late medieval manuscripts.  Claims that promote the idea that the KJV’s readings typically originate in the 1100s or later should be regarded as propaganda.

In addition, it should be pointed out that when marketers of the NIV refer to the high number of Greek New Testament manuscripts as an “embarrassment of riches,” they are strangely celebrating the abundance of evidence against the text that they promote, since the vast majority of Greek manuscripts support the readings that are not in the text of English versions such as the NIV, the ESV, the NLT and the NET.

The base-text of the NIV is often described as an “eclectic” text.  By definition, an “eclectic” compilation takes all transmission-branches into consideration.  But in terms of its content, at points where the Alexandrian Text and the Byzantine Text disagree, the Nestle-Aland compilation adopts the Byzantine reading less than 1% of the time.

The Nestle-Aland text represents the local text of , especially as represented by Vaticanus and Sinaiticus, from the fourth century.  Support for many Byzantine readings is just as old, or only slightly later.  For some Byzantine readings, it is earlier.

What about papyrus manuscripts?  Papyrus manuscripts from the 200s confirm the earlier use of the Alexandrian Text in .  We do not have papyrus evidence from other locations.  But, unless one wants to propose that Christians in the 300s spontaneously threw out the copies of Scripture that their predecessors had endured persecution to protect and preserve, the alternative is to reckon that there were papyrus manuscripts in Italy, Greece, Cyprus, Turkey, and Syria in the 200s, and that they were the ancestors of manuscripts used in the 300s and 400s which contained many Byzantine readings.

The humidity-level in , , , , and is not conducive to the preservation of papyrus – but it is not equitable or reasonable to ignore the text from this area because of the weather.  The early stratum of the Byzantine Text deserves attention, especially the readings preserved in writings by individuals such as John Chrysostom, Gregory of Nyssa, Basil of Caesarea, Cyril of Jerusalem, Theodoret of Cyrrhus, and others.

This does not mean that future investigation of the text that was used in the northeastern in the 300s and 400s will vindicate every reading found in the majority of Greek manuscripts.  It won’t.  But the earliest discernible stratum of the Byzantine Text deserves much more attention than it has received in the so-called “eclectic” compilation upon which the NIV is based.

There are alternatives to English translations that are based on the 99% Alexandrian Nestle-Aland compilation.  Some Bible-readers, particularly in the , have reacted to the challenge posed by new versions by answering all text-critical questions with one response:  “The King James Version is always right.”  That response is not scientifically sustainable, and in many cases it is fueled by a tendency to stick to the New Testament translation one is used to, whether it really is based on the original Greek text or not.

Other Bible-readers, acknowledging non-original elements in the Textus Receptus but regarding them as fairly benign, have decided to stick with the King James Version, on the grounds that although its base-text is far from perfect, it has been shown to be sufficiently accurate as an English representation of the meaning of the original text.

For Bible-readers who desire their English translation to conform to the original text as closely as possible, rather than be inordinately limited to the local text of Egypt, the challenge posed by the rise of versions based on a pseudo-eclectic base-text should be met by the application of a more equitable eclectic method of textual criticism – an approach that is not biased against the idea that the original text may be found in the Byzantine Text.  With that in mind, I refer you to the following four English translations.

The base-text of the New Testament in the Evangelical Heritage Version, released in 2017, is far from consistently Byzantine, but its editors have taken the Byzantine Text seriously.  Of the 12 readings reviewed in this lecture, the EHV includes seven of them in the text.  The text of the EHV also includes Mark 16:9-20, Luke 22:43-44, all of Luke 23:34, and John 7:53-8:11.  More information about the Evangelical Heritage Version can be found at  wartburgproject.org – that’s W-a-r-t-b-u-r-g-project.org, all one word.

The Eastern Orthodox New Testament reflects an awareness of the critical text in its footnotes, but consistently favors the Byzantine Text.  It can be purchased from New Rome Press, and it can be read online, for instance at the website yorkorthodox.org/bible .  The text of the EOB includes all of the readings reviewed in this lecture, and also includes Mark 16:9-20, Luke 22:43-44, all of Luke 23:34, and John 7:53-8:11.

The World English Bible is a copyright-free translation of the Old Testament and New Testament.  Its New Testament was intended to be based on the Majority Text.  It is available as a free PDF download at https://worldenglish.bible/ and is also available in print.

In addition, if you read the New King James Version and pay special attention to its textual footnotes, especially where readings in the Majority Text are mentioned, it will be similar to reading a version based on the Byzantine Text.