Minuscule 1241 and the Ending of Mark

Minuscule 1241, housed at Saint Catherine’s Monastery on , is sometimes cited as apparent support (“1241vid”) for the abrupt ending at Mark 16:8.  More specifically, in the 1966 Greek New Testament published by the United Bible Societies, in the textual apparatus, in a list of witnesses that “add vv. 9-20 with asterisks, obeli, or critical note in ms,” we see the entry “1241vid.”

The basis for this frugally presented entry is found in Six Collations of New Testament Manuscripts, by and Silva New (which was the 1932 Harvard Theological Studies #17).  The author(s) wrote on page 111, “The end of f. [folio] 55 is εφοβουντο γαρ written in the centre of the line.  The scribe has not done this elsewhere.”

By the time the fourth edition of the  UBS Greek New Testament was released, the apparatus’ report about the testimony of 1241 was changed.   The textual apparatus, instead of having an entry for witnesses that “add vv. 9-20 with asterisks, obeli, or critical note in ms,” the fourth edition had an entry for “add vv 9-20 with critical note or sign,” and the witnesses thus described are “f1 205 and others.”  1241 is included (without “vid”) in the list of witnesses which “add vv 9-20.”

There is a good reason for this change:  in the real world, the scribe did do this elsewhere.    If one visits the website of the Library of Congress and finds the microfilm page-views of 1241, a tour of the pages containing the four Gospels will show that there are several pages on which the final line contains only a word or two; for instance, if one looks at Image 15, it can be plainly seen that the final line on the page contains only the single word αρτους from the middle of Matthew 14:19.  This phenomenon occurs repeatedly.    But final lines consisting of a single non-centered word are not really the thing to see. 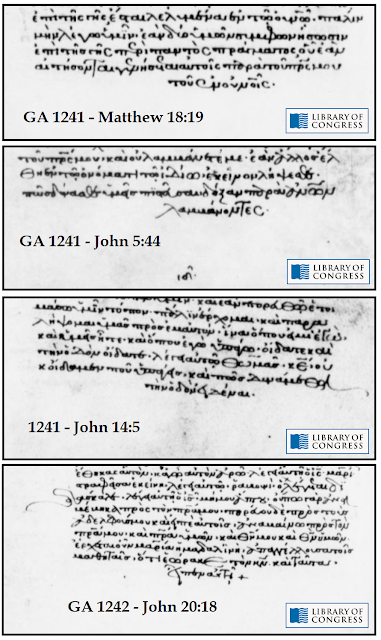 We have here another example of pseudo-evidence to which a paraphrase of Balak’s words in Numbers 24:10 may be applied:  “This witness was cited to draw these twelve verses into question, and, behold, it has altogether blessed them!” 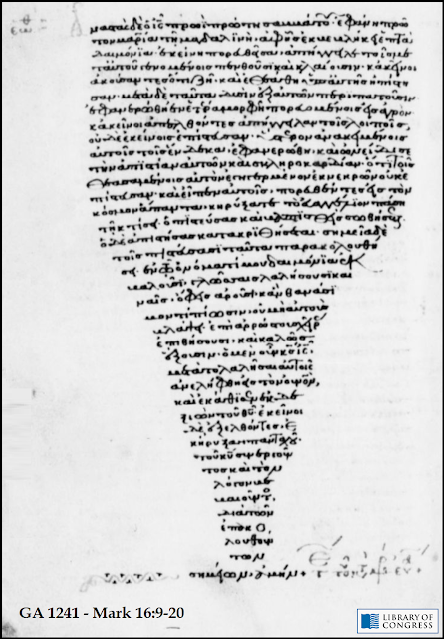