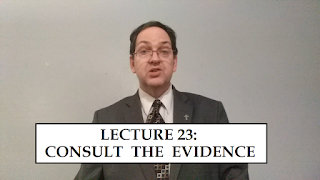 Lecture 23 in the series Introduction to NT Textual Criticism is available to view, with captions, on YouTube, about the advantages of consulting the external evidence for the New Testament text.  Special attention is given to 14 manuscripts and one inscription.  Links to some online manuscript-collections are included in the captions at the end of the lecture.

It can also be viewed, without captions, on Bitchute.

Here is an excerpt:

Fifth, the Book of Kells.  The Book of Kells is so famous, because of its artistry, that it's easy to overlook it as a textual witness might be overlooked.  Widely regarded as the most beautifully written of all Gospels-manuscripts, the text in the Book of Kells might be considered just another copy of the Vulgate.  For the most part, that is what it is – but it also has some readings that echo Old Latin ancestors that pre-dated the Vulgate.

One of the readings in the Book of Kells, and several other Latin copies, occurs in Matthew 27:49.  After Matthew’s report that some of the bystanders at Jesus’ crucifixion said, “Wait, let us see whether Elijah will come to save Him,” the very next thing that happens, in most copies, is that Jesus cries out with a loud voice, and yields up His spirit.   But in the Book of Kells, before verse 50, there is more.  It says,

“And another person took a spear, and pierced His side, and there came out water and blood.”

This is an approximate parallel to John 19:34.   The significant difference is that in John, when Jesus is pierced, He is already dead; the soldiers pierce His side to remove any doubt that He has died.  The reading in the Book of Kells appears to be an interpolation, inserted by a scribe trying to make a harmonization – but the insertion was made at the wrong place, before Jesus dies.

But the originator of this reading cannot have been a Latin scribe, because the same reading is also found in Codex Vaticanus and Codex Sinaiticus, the two Greek manuscripts that form the backbone of the base-text of the New Testament in the NIV and ESV.

As a side-note, I have noticed that although the NIV and ESV rely very heavily on these two manuscripts, the reading of Vaticanus and Sinaiticus in Matthew 27:49 has not been adopted in their text, and, as far as I can tell,  is not mentioned in the NIV and ESV in a footnote, even though it is supported by some other Alexandrian witnesses such as Codices C and L.

If we reckon that witnesses that share the same readings tend to have the same origin, then the thing to see is that the witnesses with this relatively rare reading in Matthew 27:49 must be connected in some way, even though some of them represent a stratum of the Latin Text in Ireland, and some of them represent a very early form of the Greek Gospels-text used in Egypt.

This connection is also suggested by similarities between some of the artwork in the borders of the Book of Kells, and in the artwork that appears in some Coptic manuscripts.

The parchment pages of the Faddan More Psalter were found along with a leather cover.  It was found in a bog, near the city of .  The discoverer, Eddie Fogerty, exercised remarkable skill and competence in preserving the manuscript once it was discovered.  One of the interesting things about the cover is that there is definitely papyrus in the cover’s lining.

Sometimes, we cannot access the evidence directly because it does not exist anymore.  That is probably the case with our seventh witness:  Codex Gissensis.  For a few decades after its discovery in in 1907, a small Gothic and Latin fragment, with text from Luke 23 and 34, was kept in .  Unfortunately, it was reportedly destroyed as a result of bombing during World War II.  But black and white photographs of the manuscript have survived.

Similarly, when was enlarged on the southern border of around the year 1970, many artifacts from the ancient site of Faras were heroically rescued by a team of researchers from , and they can still be visited at the in .  Some inscriptions had to be left behind, though, and were subsequently submerged.

But photographs of them were taken, including a photograph of our ninth witness:  an inscription that features the beginning and ending of each Gospel.  Even this small witness can help track the geographic spread of variants in these portions of the text.

Is it possible to support your ministry somehow in terms of donation? Really find your work a blessing.