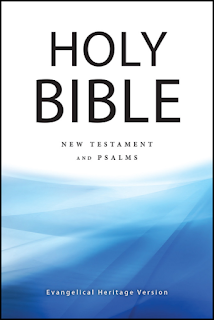 In 2017, the Evangelical Heritage Translation of the New Testament and Psalms was published.  Let’s take a look at this new translation (focusing on the New Testament portion)!
The EHV is mercifully free of arbitrary paraphrase.  An Introduction explains that the EHV is intended to be “an all-purpose Bible for the church,” and this has elicited a balanced approach.  Terms such as “justify,” “flesh,” “mammon,” and “saints” have not been shunned.  Conveyance of the meaning of the original text was, according to the EHV’s Introduction, a higher priority than elegant English style.  The issue of gender-inclusivity was specifically addressed:  “In the use of so-called “gender-accurate language,” the translator will strive to be inclusive where the original is inclusive and exclusive where the original is exclusive.”  Other principles of translation that were engaged in the production of the EHV can be found at the Wartburg Project website.
The New Testament base-text of the EHV is somewhat unique; the editors attempted to avoid a bias toward any single textual tradition, whether Alexandrian or Byzantine.  Their approach is described at the website:
“In general, as we examine significant variants, the reading in a set of variants that has the earliest and widest support in the witnesses is the one included in the text. The other readings in a set of variants are dealt with in one of three ways:
● A reading that has very little early or widespread support in the witnesses is not footnoted in order to avoid an overabundance of textual notes.
● A reading with significant early and/or widespread support but not as much early or widespread evidence as the other reading is reflected in a footnote that says, “Some witnesses to the text read/add/omit: . . . .”
● A familiar or notable reading from the King James tradition (e.g. the addition or omission of a whole verse) whose support is not nearly as early or widespread as the other reading can be reflected in a footnote that says, “A few witnesses to the text read/add/omit: . . . .”

In the epistles, quite a few readings found in the majority of manuscripts go unmentioned:  “of Christ” does not appear in Romans 1:16 (no footnote); “adultery” does not appear in Galatians 5:19 (no footnote); Galatians 5:24 reads “to Christ Jesus” (no footnote); “through Jesus Christ” does not appear in Ephesians 3:9 (no footnote); Ephesians 5:9 reads “of the light” (no footnote), James 4:12 includes “and judge” (no footnote); First Peter 1:23 does not have “forever” (no footnote), etc.  Yet there are also plenty of Alexandrian readings which have been quietly rejected; Matthew 16:2-3, for example, is all included in the text with no footnote, and Philippians 4:13 says, “through Christ, who strengthens me” with no footnote.
Occasionally a reading that is found in the majority of manuscripts is described in a footnote as if it supported by “A few manuscripts.” Hopefully this will be corrected in the future, so as to differentiate between minority readings found in the Textus Receptus and the readings of the Byzantine Text.  (Perhaps the footnotes could be improved by simply referring to the Byzantine Text and Alexandrian Text, so as to avoid describing two different groups of manuscripts in the same terms.)
No doubt readers want to know how the EHV treats Mark 16:9-20.  I am pleased to report that the EHV fully includes these 12 verses in the text with no brackets.  The EHV’s footnote should be read with attention:  “This translation includes verses 9-20 because they are included in the vast majority of Greek manuscripts that have been handed down to us.  Evidence for the existence of this long ending extends back to the 2nd century.  In the early centuries of the church, these verses were read in worship services on Easter and Ascension Day.   However, a few early manuscripts and early translations omit verses 9-20, and a few manuscripts have a different ending.”  One might wish that this note were improved (we have only two early Greek manuscripts that stop Mark’s text at 16:8, for one thing) but it is far better than the misleading treatment found in some other versions.
John7:53-8:11 is also fully included in the text.  A note for John 7:53 states, “Some witnesses to the text omit 7:53-8:11 or include these verses in other places within John’s Gospel, The witnesses that include these verses are early and widespread throughout most of the early church.”  This is a welcome clarification – one might even say correction – of the unhelpful vagueness that characterizes the treatment of this passage in some other versions.  (Instead of “in other places” the note could say “before or after the Pentecost-lection, or at the end of the book with a note stating that it was previously found after 7:52,” but this might be too much to hope for.)

In First John 5:7, the EHV does not have the Comma Johanneum in the text.  A footnote states, “Only a very few late witnesses to the text read testify in heaven:  the Father, the Word, and the Holy Spirit, and these three are one. 8And there are three that testify on earth”.”  This could be improved by referring to “Very few late Greek manuscripts,” inasmuch the Latin evidence for this interpolation is plentiful.
Now about the formatting of the EHV’s text:  it is arranged in paragraph-form, and simple headings, set off from the main text via the use of a different font, regularly separate blocks of text, filling the same role as the ancient kephalaia (chapter-titles) fill in our Greek manuscripts.  In the Gospels, the headings are supplemented in smaller print by mention of parallel-passages.  Extensive poetic passages and extensive quotations are indented.  Luke 1:46-55 (the Magnificat) is all indented; Luke 1:68-79 (Zechariah’s Song) is all indented; Luke 2:29-32 (the Nunc Dimittis) is all indented.  Likewise First Corinthians 3b-5 and the last six lines of First Timothy 3:16 (beginning with “He was revealed in the flesh”) are indented.  Philippians 2:5ff., however, has no special indentation.
Old Testament quotations, whether extensive or not, are identified in footnotes.  Footnotes also serve to occasionally supply or define terms for which there is no exact modern equivalent, such as monetary units and measurements of weight and volume.
The formatting is, in a word, excellent.  Some sections are much longer than others, but this is perhaps an unavoidable effect of following the natural structure of the text.

As a translation – setting aside questions about the base-text – the EHV New Testament is a model of skillful, accurate work.  The translators have generally taken a conservative approach, avoiding needless imprecision while recognizing the need to treat idioms with reasonable freedom.  Its treatment of passages which, in some recent translations, have been adulterated in the service of egalitarian theology or feminism, is above reproach.  The EHV is remarkably clear and candid in First Corinthians 14:34-35, First Timothy 2:12, First Timothy 3:1-7, and Titus 1:5-9.  Likewise the EHV’s renderings of passages about homosexual acts are unlikely to be welcomed by those who want to advance an ungodly agenda.
Only occasionally does the EHV resort to unconventional renderings:  “Gentlemen,” for instance, appears repeatedly at the beginnings of speeches in the book of Acts; yet this is not necessarily a bad thing; this modern English term is, I think, a perfect proxy for the Greek word which several modern translations fail to translate altogether.  Another fresh and admirable rendering is found in the EHV in Christ’s words in John 21:5 – “Boys, don’t you have any fish?”.  More debatable:  the decision to present what are, in other versions, some references to the Spirit, as references to the spirit (meaning, according to a footnote attached to Galatians 5:16, “the new nature in contrast with the sinful flesh”), and the decision to translate what has traditionally been rendered as “born again” as, instead, “born from above.”
Much more information about the Evangelical Heritage Version can be found at the Wartburg Project website, which features, among other things, an expanded Introduction, 49 Frequently Asked Questions and their answers, and a comparison of the Christmas story in the EHV and some other translations.  It should not be overlooked that while the EHV is not the official version of any denomination, it is, by design, a translation made by individuals professing to be spiritually invested in the church.  Members of the Wisconsin Evangelical Lutheran Synod have overseen its production.  Brian R. Keller served as the New Testament Editor.
While I would prefer a version based on a Greek text with more Byzantine readings, the EHV New Testament’s base-text avoids the extreme dependence upon poorly attested Alexandrian readings which characterizes the base-text of the ESV, NIV, NLT, etc.; as I have stated in the past, given the choice, I would rather sail in a ship with harmless barnacles on its hull than in a ship with holes in its hull.  All in all, the EHV New Testament is a superb translation which deserves to be warmly welcomed by evangelical Christians.  It merits the consideration, especially, of ministers and congregations who favored the (discontinued) New International Version of 1984, but who recognize that the 2011 edition of the New International Version, post-TNIV, is significantly flawed.  It is available to purchase online at the Wartburg Project, at Amazon (where the entire Gospel of Matthew can be previewed), and (with bulk discounts) at the website of its publisher, Northwestern Publishing House.
The EHV Bible is scheduled to be available in summer of 2019.

I would welcome your opinion as to which English translation of the Bible you favor most. Blessings to you