GA 34: The Manuscript with (Almost) Everything

GA 34 doesn’t usually get much attention these days, even though in past generations it was seen by giants of the field of textual criticism such as Wettstein, Scholz, Tischendorf, and Gregory.  Its Gospels-text is generally considered normal and unremarkable.  It was produced in the 900s, possibly as one of the first manuscripts made on at the Stavronikita Monastery.  Currently it resides at the National Library of France, as Coislin Grec. 195.

Its text is a very good example of the Byzantine Gospels-text that was circulated in the Middle Ages (while not being a member of f 35).  Physically, the manuscript is in good condition.  It has almost all the supplements to the Gospels-text that one could expect – there are even several pages of extra comments between Matthew and Mark, and between Mark and Luke.  There are beautiful full-page portraits of each evangelist, Eusebian canon-tables, Section-numbers alongside the text, Chapter-headings (titloi) and numbers written in crimson, and a commentary in the margins drawn from the writings of such patristic giants as Irenaeus, Origen, Apolinarius, Dionysius of Alexandria, Eusebius of Caesarea, Titus of Bostra (the main commentator in Luke), Theodore of Mopsuestia, Cyril of Alexandria, Hesychius of Jerusalem, and others (including, in Mark, Victor of Antioch).  A few pages from Michael Psellos’ Homilien precede the Gospels-text.

The copyist’s script is very legible.  Toward the end of the Gospel of John, the Gospels-text has been reinforced on some pages by a copyist whose script was not so good, but this should not distract from the generally excellent condition of the manuscript.

Greek numerals and various symbols written above the line within the Gospels-text correspond to Greek numerals designating sections of text in the catena.  In at least one instance (in the text at Mt. 10:17, and in the corresponding commentary), a comet-mark is used, like the comet-mark that occasionally appears in the Zelada Gospels (GA 2812).

There tends to be more Gospels-text per page in Matthew, and especially in Mark and Luke, than there is in John.

Here are some interesting readings of GA 34, as well as some example of corrections which appear (often in the side-margin in uncial letters).

10:41 – The sentence inexplicably ends on one page with δικαιου although it continues with ληψεται on the next page.

15:8 – does not have και τοις χειλεσι με τιμα in the main text; a secondary hand has added it in the side-margin.

17:14 – ειπεν αυτοις was initially skipped; the words are added in the side-margin.  There is a break in the line between Ιωαννου and του βαπτιστου.

18:35 – On this page the commentary is sparse; there is no commentary to the side of the text.

26:53 – a gap appears between λεγεωνας and αγγελον; probably there was an erasure here. 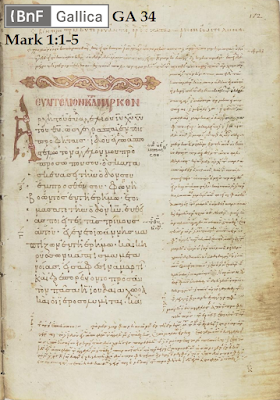 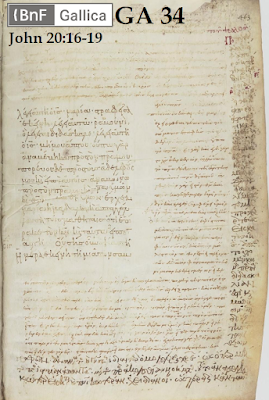 16:8 – has εαυτ- in the margin; an erasure is in the text where apparently ταυτων had been initially written.

Page-views of GA 34 can be downloaded from the Gallica website, and the entire manuscript has been indexed at CSNTM.