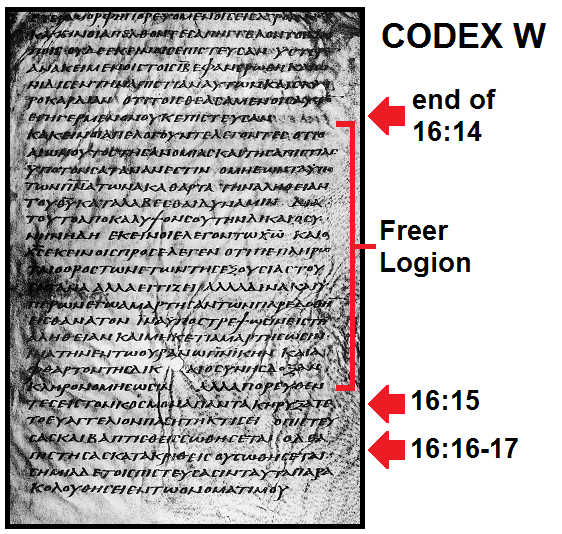 In manuscript 1221, lozenge-dots (four dots, arranged north-south-east-west) appear between Mark 16:8 and 16:9. There is no asterisk.  A telos-symbol appears above the word gar in 16:8 and an arch-symbol appears above the beginning of the word Anastas in verse 9.  It would be easy for a novice manuscript-examiner, focused on verse 8, to imagine that this was text-critically significant.  However, the same features which appear after 16:8 also appear in 1221 after Mark 2:12, halfway through , and at 6:7. These are the beginnings of lections.  These symbols also occur at Luke , , at the end of , and after . They are lectionary-related and there their significance ends.
In 2346, there is neither an asterisk nor an obelus at Mark 16:9. Lozenge-dots appear in 2346, above the line, between the end of 16:8 and the beginning of 16:9.  In the margin, to the left of the text, is a telos-symbol, and below the telos-symbol in the margin is an arch-symbol.  The meaning of this is pretty clear: the lozenge-dots are located where one lection ends and another lection begins; the person who added this piece of lectionary-equipment did not want to reduce the legibility of the text by placing the telos-symbol and arch-symbol in the text itself, so he placed them in the margin, and put the smaller lozenge-dots in the text instead to signify the point to which they referred.  Anyone who compares the lectionary-equipment at Mark 16:9 to the lectionary-equipment at John can see that it is the same thing: at John , superscripted lozenge-dots appear, and a telos-symbol is in the left margin, and an arch-symbol is in the right margin.  Again: these symbols signify lection-breaks and have no text-critical significance.
Minuscule 2812, which is kept at Madrid in the National Library of Spain.  It is known as the Zelada Gospels.  (For a while in the 1800s, it was thought to be lost.)  In 2812, a symbol appears at the base of the page on which 16:9 appears; the same symbol appears on the next page, and that is where one finds the relevant comment, which is the same comment attributed to Victor of Antioch in the Catena Marcum.  This symbol is doing the same job that footnote-numbers do:  it refers the reader to a note in the margin.

Imprecise Statements in the NET's Note on Mark 16:9-20:
(1) Instead of saying, “This shorter ending is usually included with the longer ending,” it would be more precise to say, “In the witnesses in which the Shorter Ending appears after 16:8, it is always followed by 16:9 except in k, in which an interpolation describing Jesus’ ascension at the time of His resurrection is inserted between verse 3 and verse 4.”
(2) Instead of saying, “Most mss include the longer ending (vv. 9-20) immediately after v. 8,” it would be more precise to say, “Except for Vaticanus and Sinaiticus and the five Greek manuscripts in which the Shorter Ending appears between 16:8 and 16:9, all undamaged Greek manuscripts of Mark 16 include verse 9ff. after 16:8.”
(3) Instead of saying, “Eusebius knew of almost no Greek mss that had this ending,” it would be more precise to say that Eusebius knew of some Greek manuscripts in which Mark’s text stopped at 16:8.  In his composition Ad Marinum, as Eusebius responded to a question about how to harmonize Mark 16:9 with Matthew 28:1, he wrote that one way to resolve the question might be to reject Mark 16:9-20 on the grounds that the passage is not in every copy, or is absent from the accurate copies, or that verse 9 is in some copies but not in all of them, or that almost all Greek manuscripts end the text at the end of verse 8; yet in the same composition, Eusebius also explained how to harmonize and punctuate, and thus retain, Mark 16:9, and at one point he mentioned, without qualification, that Mark says that Jesus cast seven demons out of Mary Magdalene (which is stated in Mark only in 16:9).  Eusebius did not include verses 9-20 in the Eusebian Canons, a cross-reference system that he developed for the Gospels. (Additional details about Eusebius’ statements about the ending of Mark can be found in Roger Pearse’s book Eusebius of Caesarea: Gospel Problems and Solutions.)
(4) Instead of saying, “Several mss have marginal comments noting that earlier Greek mss lacked the verses,” it would be much more precise to say, “Fourteen manuscripts have notes stating that some manuscripts lack verses 9-20; in three manuscripts the note also says that the ancient manuscripts contain the entire passage; in 10 of them the statement that some manuscripts lack the passage is balanced by the statement that in many, the passage is present.”
Errors of Omission
(1) The NET’s footnote neglects to mention the early and abundant patristic support for the inclusion of Mark 16:9-20.   It would be better balanced if it contained a statement such as, “Mark 16:9-20 was utilized in the 180’s by Irenaeus, in the 170’s by Tatian, around 160 by Justin, and probably by the unknown author of Epistula Apostolorum, around 150.  Many other patristic writers, such as Hippolytus, Ambrose, and Augustine, also used the passage.”  The NET's failure to mention four pieces of evidence from the 100s, and other Roman-Empire-era patristic evidence, while mentioning evidence that is considerably younger, shows very clearly that the NET's note was designed to persuade readers to regard Mark 16:9-20 as spurious, not to describe the relevant evidence in a balanced and unbiased way.
Problematic Descriptions of the Internal Evidence
(1)  The NET’s claim that the vocabulary of verses 9-20 is “decidedly non-Markan” should be qualified by a comparison to the data collected by Bruce Terry, who showed that a nearby 12-verse passage (Mark 15:40-16:4) contains even more once-used words (that is, “non-Markan” words, using the NET’s loaded language).

Posted by James Snapp Jr at 8:03 PM No comments: