Recently Dwayne Green and I sat down and discussed Mark 16:9-20:
Part 1 - In which we consider what’s wrong with the footnotes and headings about Mark 16:9-20 in many English Bible translations, and also look into different base-texts of English translations.
Part 2 - In which we describe the manuscripts 304, Codex Vaticanus, and Codex Sinaiticus, the only Greek manuscripts which end the text of Mark 16 at v. 8.
Part 3 - In which we describe some commentators’ misrepresentations of manuscripts with notes about Mark 16:9-20, cover some background of the “Shorter Ending,” and describe some neglected patristic evidence.

I also spoke with apologist Sam Shamoun about The King James Only Controversy for almost two hours, reviewing the false claims, mistakes, inaccuracies, and inconsistencies in James White's book The King James Only Controversy, including (but certainly not limited to) White's inaccurate claims pertaining to Mark 16:9-20. We investigated White's version (made not only in his book but also in various online venues) of how Constantine Tischendorf encountered pages from Codex Sinaiticus, his claim about the text-form discovered in Papyri, and much, much more.

And, at Nicholas Johnson's Signs & Wonders video blog, I've discussed Mark 16:9-20 more informally, and (with some technical difficulties that we hurdled together), the Byzantine Text of the New Testament, and the relative qualities of some recent English translations of the New Testament. 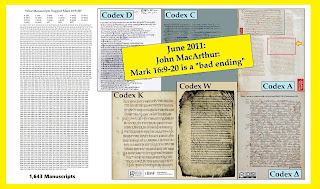 Watch the new video about the false claims that Grace To You has been spreading about Mark 16:9-20 for the past ten years on YouTube.

It has been almost ten years since Dr. John MacArthur preached a sermon titled “The Fitting End to Mark’s Gospel,” in which he called Mark 16:9-20 a “bad ending.”  Since then, the ministry of Grace to You has promoted his claims over and over.

But many of his claims are false.  I’m not challenging his doctrines here; I mean that  he says many things in that sermon that are flat-out untrue.  He says things that are fictitious.  In the next ten minutes, I will focus on just some of them.

(1)  John MacArthur says, “I would say there is massive evidence that the Holy Spirit not only inspired the Scripture but preserved it in its purity through all history.”   He also says, “There are twenty-five thousand ancient manuscripts of the New Testament.  Such an abundance preserved by the Holy Spirit through faithful men in the church makes it possible to reconstruct the original books with virtually complete accuracy.” 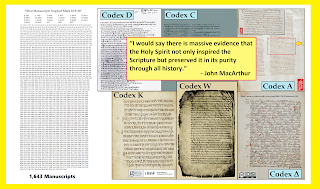 There are 1,653 Greek manuscripts of the Gospel of Mark.  Almost all of them – over 99% – include the 12 verses that MacArthur calls a “bad ending.”  There are just three Greek manuscripts in which the text of Mark ends at Mark 16:8.

If “massive evidence” shows that the text of Scripture has been preserved in its purity through all history, then massive evidence also refutes MacArthur’s idea that Mark 16:9-20 should be rejected.

(2)  John MacArthur claims that after the Council of Nicea in 325, as Christianity became established as the religion of the , persecution ended, and starting then you have the proliferation of manuscripts.  “They all survived,” he said, “because no one is banning them or destroying them.”

That claim is downright silly.  Even after Roman persecutions stopped, humidity still worked.  Outside the exceptionally dry climate of , papyrus manuscripts experienced natural decay.  Eusebius of Caesarea claimed that Emperor Constantine instructed him to make 50 manuscripts for churches in .  Do we have 50 Greek manuscripts from the 300s?  No we do not.  The claim that “they all survived” is ridiculous.

(3) MacArthur demonstrated his ignorance of New Testament manuscripts again when he identified Codex Sinaiticus as “The earliest and most important of the Biblical texts that have been discovered.”  But Sinaiticus is not the earliest New Testament text; other substantial manuscripts, such as Papyrus 45, and Papyrus 46, are earlier.

(5)  MacArthur then says,  “When you compare all of these manuscripts, they’re all saying exactly the same thing.” 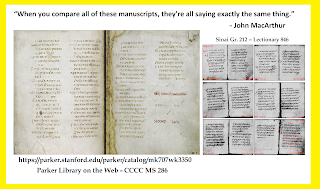 But that is not true.  The text in Vaticanus and Sinaiticus is different from the text of the Vulgate, and it is different from the text of the Peshitta – and one difference is that the Syriac Peshitta and the Latin Vulgate include Mark 16:9-20.  When you compare the vast majority of the Greek, Latin, and Syriac manuscripts, they say the opposite of what MacArthur seems to think they say!

If we’re going to say, “Let’s accept the text that is supported by all these Greek and  Latin and Syriac manuscripts,” we should be accepting Mark 16:9-20. 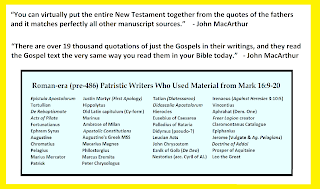 (6)  John MacArthur tries to appeal to patristic quotations, claiming that “you can virtually put the entire New Testament together from the quotes of the fathers and it matches perfectly all other manuscript sources.”

That claim is fiction.  You can easily demonstrate that it is fiction by picking up a textual apparatus and looking through the list of patristic writers who are listed as support for different rival readings.

But MacArthur doesn’t let the obviously false nature of his claim slow him down.  He keeps going:  he says, “There are over 19 thousand quotations of just the Gospels in their writings, and they read the Gospel text the very same way you read them in your Bible today.”   That is another fictitious claim.  MacArthur seems unaware that what he calls a “bad ending” is quoted far and wide by patristic writers from the days of the . 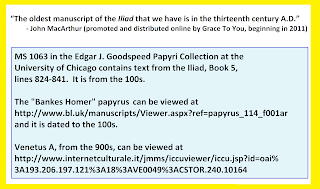 (7)  MacArthur continues to spread falsehoods when he compares the history of the transmission of the New Testament with the transmission of Homer’s Iliad.   He claims that “The oldest manuscript of the Iliad that we have is in the thirteenth century A.D.”  That is false.  There are dozens of fragments of the Iliad from way before the thirteenth century A.D.  Oxyrhynchus Papyrus 560, from the 200s, is just one example.  Are the personnel at Grace To You aware that John MacArthur is making these false claims?  Then why has  Grace To You been spreading them for the past 10 years?  Do they just not care?  It’s been ten years.  So much for the pretense that Grace To You believes that truth matters.

(8)  John MacArthur says we can be confident that our English translations are accurate because “We have so many accurate, consistent manuscripts.”  But he’s not relying on many Greek manuscripts in this case; he is relying on three.  One is a medieval commentary-manuscript.  The two early ones are the ones that matter, and one of them has a distinct blank space that includes a whole column after Mark 16:8, and in the other one, the last page of Mark is written by a different scribe than the scribe who wrote the surrounding pages. 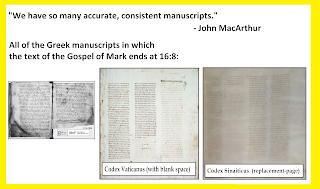 John MacArthur is thus rejecting the testimony of 1,653 Greek manuscripts, including early manuscripts such as Codex A, Codex C, and Codex D,  and he is basically depending on two Greek manuscripts.  And, inasmuch as they disagree with each other at 3,036 places in the Gospels, they can’t both be very “accurate, consistent” copies of the Gospels. 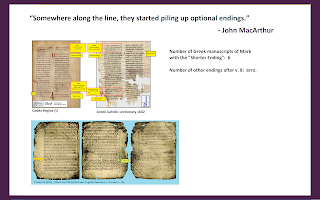 (9)  MacArthur claims that “Somewhere along the line, they started piling up optional endings.”  But in real life, besides verses 9-20, there was just one other ending after verse 8:  the “Shorter Ending” – and that was in one particular locale:  .   It is preserved in eight Greek manuscripts, and all eight of them also support the usual 12 verses.

Let me say that again:  a total of eight Greek manuscripts have preserved one rival ending, along with the normal ending.  There is also one manuscript, Codex W, which has extra material between verse 14 and verse 15, but that is an interpolation, not an ending.  The claim that endings “started piling up” is rubbish and nonsense!  Anyone who tells you that there were “several endings” or “various endings” – I’m looking at you, Philip Comfort; I’m looking at you, New Living Translation footnote-maker – is deceiving his readers. 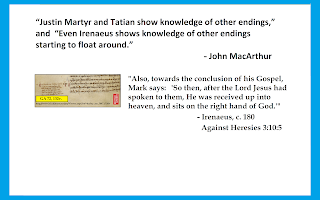 What Justin Martyr and Tatian and Irenaeus show is that they used a text of Mark that included Mark 16:9-20.  There is no evidence in their writings of any other ending.  MacArthur is just making things up!  Instead, he should state that  Irenaeus' quotation from Mark 16:19 in Against Heresies, Book 3, chapter 10, around the year 180, (long before Vaticanus and Sinaiticus were made in the 300s), it means that Irenaeus’ manuscripts of Mark 16 included verses 9-20. 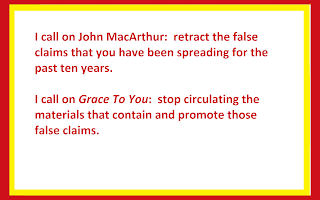 In conclusion:  I call on John MacArthur to retract the false claims that he has been spreading for the past ten years.  And I call on Grace To You to stop circulating the materials that contain and promote those false claims.

Until this is done, I say to everyone who regards John MacArthur as a reliable source of information about New Testament manuscripts, and to everyone who thinks of Grace To You as a responsible organization that would never promote false claims:  you have my pity.

An important collection of previously unpublished New Testament materials has been released in the  European micro-state of .  Scholars were aware of the existence of this collection, but its publication was delayed until 2020 in accordance with the stipulations of the last will and testament of Prince Franz Johann II, who served as prince of from 1938 to 1989.  It was delayed one year further due to Covid-19-related disruptions and by some concerns in the art world that the royal family could not disprove speculative theories that the preservation of this collection during WWII was due in part to “forced labor.”
After documentation was provided which shows that the entire collection was preserved due to a simpler mechanism – its obscurity – no obstacles stand in the way of its publication.  The first institution to display the Ecclesiastical Archives of Liechtenstein will be the small Treasure Chamber (the Schatzkammer – described in this video) in the capital city of Vaduz, not far from Vaduz Castle, where the collection was kept for decades.

Following the formal accession of H.S.H. Hereditary Prince Alois, most of the collection will be transferred to a permanent display in the Liechtenstein Garden Palace in , , near the embassy.

The collection originated mainly as an effect of Franz Johann II’s penchant for the collection of fine art.  He and his predecessor, Johann II (who led the country from 1929 to 1938) – and many of their predecessors – accumulated what is now one of the finest art collections in the world.  The intricately decorated book-covers and cases of manuscripts were cherished as art; the manuscripts they held were probably seen as secondary items when purchased.  But new assessments of these rarely seen books, undertaken by a team of scholars sponsored by H.S.H. Hans-Adam II, has elicited a new appreciation of their value.

The Biblical manuscripts in the Ecclesiastical Archives of Liechtenstein include the following:
● Seven incomplete minuscule copies of the Gospels in Greek, including one from the 900s.  Most feature the Eusebian Canons and a few attached pages.

● Ten Latin copies of different portions of the New Testament, including a book of the four Gospels from the 900s, probably produced in

● Three Latin Book of Hours, from different medieval periods.  One of these features some Greek notes accompanying passages taken from the Gospels.

● A majuscule fragment, written in both Greek and Latin, containing Luke 24:17-25, found unbound in an antiphonary, which was obtained by Carl Eusebius in the 1600s.

● An ancient Latin lectionary once owned by Massimiliano Soldani Benzi.

More information about the plans to publish and display these documents can be found by visiting the website of the Liechtensteinisches LandesMuseum.