1690 and 1691 are both medieval Gospels-manuscripts that were photographed by CSNTM personnel in in 2016-2017 at the National Library of Greece.  Both manuscripts are fully indexed at the CSNTM website.  1690 is assigned to the 1200s or 1300s.  The text on the last page of Mark in 1690 is written in a cruciform pattern.  1691 is older, assigned to the  1000s.  Its text is written in two columns per page.  Let’s see which manuscript has the more accurate text in a sample passage, using the Solid Rock GNT as the standard of comparison.  In the spirit of the season, I have selected Luke 2:1-20 as today’s textual arena.   As usual, sacred-name contractions and other abbreviations, and minor orthographic variants, are noted, but are not counted in the final tallies.

13 – no variants, but the scribe apparently momentarily skipped the phrase εις τον ουρανον, which is in the margin (in the main scribe’s handwriting), correcting his mistake before the manuscript was completed.

7 – (has τη written in superscript before φατνη) 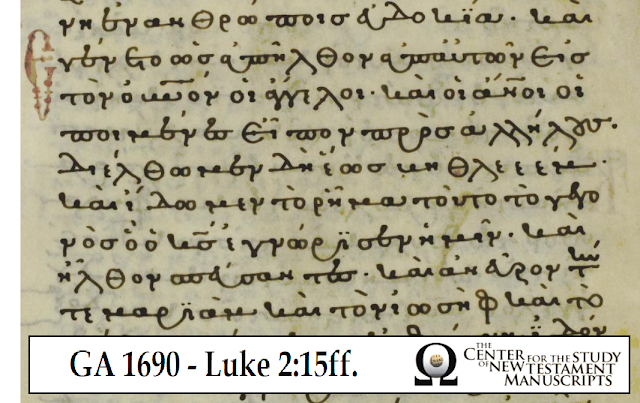