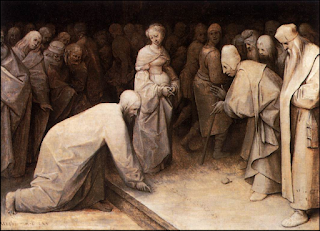 In a recent interview at Apologia TV, James White (of Alpha & Omega Ministries) offered some comments about John 7:53-8:11 which reflect a common misunderstanding of some evidence pertaining to that passage.  White, who does not believe that these 12 verses belong in the Bible, turned his attention to them about 52 minutes into the interview, stating that he was going to explain why most scholars are confident that the passage is not genuine.
White proceeded to explain that although most manuscripts contain the pericope adulterae between John and , it is also found in four other places:  “In manuscript 225, it’s found after John .  In manuscript 1, it’s found after John 21:25.  And here’s the important part:  in a group of manuscripts called family 13, it’s not in John.  It’s after Luke 21:38.  And in manuscript 1333, it’s after Luke 24:53.”
These multiple locations, White stated, constitute “absolute evidence” that John was not originally part of the Gospel of John, but was instead “a story, very popular, looking for a place to call home.”  (This remark from White is very similar to a sentence in a 2007 essay by Dan Wallace:  “The pericope adulterae has all the earmarks of a pericope that was looking for a home.”)
In White’s 1995 book, The King James Only Controversy, the same evidence was cited, and in this respect White’s comments closely resemble the contents of Bruce Metzger’s 1971 Textual Commentary on the Greek New Testament.  White, like Metzger, has omitted important aspects of the evidence, probably because the depth of White’s research on this subject did not go much further than reading Metzger’s work.  The improbability of White’s idea that the pericope adulterae was “a story looking for a place to call home” should already be obvious to anyone who ponders the contents of the first sentence of the account:  “And everyone went to his own house.”  That is simply not how one begins a story.
Before we look in detail at some aspects of the evidence that White did not share in his Apologia TV interview, there is something we should know about the Gospel-lection for Pentecost – that is, the Scripture-selection that was read annually at the Feast of Pentecost (one of the major feast-days of early Christianity, celebrating the coming of the Holy Spirit as related in Acts chapter 2).  This lection began at John 7:37 and continued to John , at which point the lector (the person designated to read the Scriptures in the church-services) was to skip to .  In many Gospels-manuscripts that are supplemented by what is known as the lectionary apparatus in their margins, symbols and notes instruct the lector to read the lection in this way.
The Pentecost-lection, in other words, consisted of John 7:37-52 plus .  In lectionaries, the passage is presented in precisely that form, making it easy for the lector to read the entire passage without having to pause and jump forward in the text to find the final portion.  The same motivation that led to the development of lectionaries – a desire to simplify the lector’s task – also led some copyists to reformat the passage that contained the Pentecost-lection in continuous-text manuscripts of the Gospels, with the result that John 7:53-8:11 was transplanted to other locations.
When we take a closer look at the manuscripts mentioned by White, it may become clear that once he studies them more carefully, he might not wish to continue to present them as “absolute evidence” in the future. 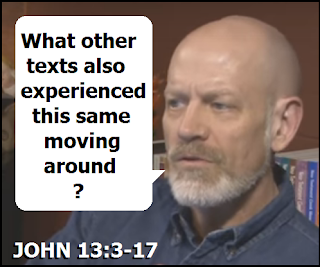 “In manuscript 225, it’s found after John 7:36.”
Which means that a copyist moved it so that it would appear immediately before the Pentecost-lection.  In manuscript 225, John 13:3-17 – the lection for the annual foot-washing commemoration on Maundy Thursday – is likewise moved; it is found not only in its usual place but also is embedded in the text of Matthew, following Mt. 26:20, conforming to the sequence in which it was read on Maundy Thursday.  If one knows nothing about lection-cycles, one might start imagining that John 13:3-17 was a very popular story that was looking for a place to call home, but the more one learns about lection-cycles, the less plausible that becomes.

“In manuscript 1, it’s found after John 21:25.”
White makes it seem as if this means that someone had the pericope adulterae sitting around as a freestanding composition, and placed it at the end of the Gospel of John.  If, however, one notices the note that appears in manuscript 1 before the passage, a very different impression is received.  The note says:  “The chapter about the adulteress:  in the Gospel according to John, this does not appear in the majority of copies; nor is it commented upon by the divine fathers whose interpretations have been preserved – specifically, by John Chrysostom and Cyril of Alexandria; nor is it taken up by Theodore of Mopsuestia and the others.  For this reason, it was not kept in the place where it is found in a few copies, at the beginning of the 86th chapter [that is, the 86th Eusebian section], following, ‘Search and see that a prophet does not arise out of .’”
Thus, according to this note, a copyist did not find this passage in most of his copies of the Gospel of John, and he also noticed that it was not commented upon by several patristic writers, so he removed it from where it had been found – after John 7:52 – and placed it at the end of the Gospel.  It had not been “a story in search of a home.”  According to this note, it had already had a home, following John 7:52, before it was moved to the end of the book.
In addition, this note – which is also found in manuscript 1582, and thus echoes the archetype of family-1 – may be a copyist’s guess about how it ended up at the end of John’s Gospel, rather than an observation.  In two of the manuscripts that formed the basis for the Palestinian Aramaic lectionary, John 8:3-11, rather than , was transferred to the end of the Gospel of John.  This displacement of John 8:3-11 was not motivated by text-critical principles; like the dislocation of the entire pericope adulterae in 225, it was done to make the lector’s job on Pentecost a little easier – the difference being that in these manuscripts’ locale, the Gospels-lection for Pentecost included John 7:53-8:2.  Eighteen Greek manuscripts echo the same treatment of John 8:3-11, with the difference that instead of being transferred to the end of the Gospel of John, these nine verses have been dropped entirely from the text of these manuscripts, although -8:2 remains in the text after .
John 8:3-11 (or 8:1-11; there was some variation) was the lection for the feast-day of Saint Pelagia, or for The Penitents (this refers to a group of women famous for their penitence and austerity).  In dozens of manuscripts of John, 8:3-11 – not the entire pericope adulterae – are accompanied by symbols in the margin, not (as some researchers have claimed) to convey scribal doubt about the passage (as if the copyists accepted 7:53-8:2 but were suspicious about 8:3-11), but to thus show where, embedded within the Pentecost-lection, one could find the lection for the feast-day of Saint Pelagia, or for the Penitents, which was October 8. 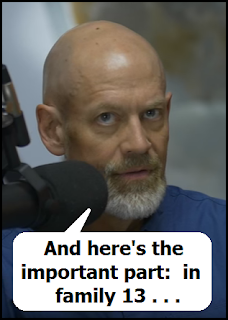 “And here’s the important part:  in a group of manuscripts called family 13, it’s not in John.  It’s after Luke 21:38.”
The text of the pericope adulterae has been altered in the family-13 manuscripts; in 8:2-3, instead of reading “and all the people came to him, and he sat down and taught them.  Then brought the scribes,” they read, “And the scribes presented to him,” in order to avoid repeating material similar to the contents of Luke -38.
Once again when we notice details which White did not mention (not due to any malevolent intent, of course, but due to plain ignorance of the evidence), the picture changes significantly.
What has happened here is that someone who had a manuscript in which John had been transferred to the end of John took things a step further to simplify things for the lector.  When transferred to the end of Luke 21, the passage would be easy to find in the cycle of readings for feast-days in the Menologion:  the lection for October 7, for Saints Sergius and Bacchus, was nearby, in Luke 21:12-19.  Almost all of the remainder of Luke 21 is discourse, making the end of the chapter the nearest convenient place in which to insert the narrative that constituted the lection for the next day, namely, October 8, for Saint Pelagia/the Penitents.

“And in manuscript 1333, it’s after Luke 24:53.”
When we consider the details which the shallowness of White’s research prevented him from detecting, the implications of the evidence drastically change from what he misrepresented them to be.  In manuscript 1333, John 8:3-11 is written on the page that follows the page on which the Gospel of Luke concludes, before the chapter-list for the Gospel of John.
What has happened is that after the text of John was written in 1333 without John 7:53-8:11, someone noticed that the passage used for Saint Pelagia’s feast-day was missing, and this person added it, preferring to use the blank page after the end of Luke instead of writing the passage in the margin alongside the end of chapter 7.  According to Maurice Robinson, in manuscript 1333, the verses are accompanied by abbreviated rubrics in the margin; one says, “The Gospel-reading for October 8, for Saint Pelagia,” and the other one says, “From the Gospel according to John.” 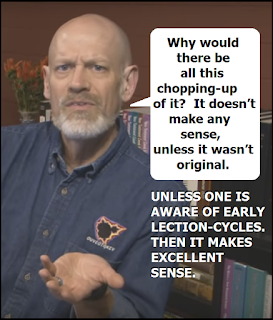 So instead of weighing in as evidence that the pericope adulterae was “a story looking for a place to call home,” as White has claimed, 1333 simply shows that John 8:3-11 was a lection designated to be read annually on October 8, and that even after someone made 1333 based on an exemplar that did not contain John 7:53-8:11, the lack of the lection for St. Pelagia’s Day was so problematic that someone saw fit to add the lection on a blank page of the manuscript.
James White has asked, “If it was original, why, why, why?  If it was original, why would there be all this chopping-up of it?  It doesn’t make any sense” –  I interrupt to mention that he seems to have asked that question out of sincere perplexity.  But one’s perplexity should not be regarded as a platform from which to jump to a conclusion.  Nevertheless that is what White has done; his statement concludes:  – “unless it wasn’t original.”  Such a text-critical method is highly dubious.  It would be better to investigate the evidence more thoroughly, in order to answer the questions, as we have done here.

This is, of course, not all that could be said about the pericope adulterae.  (I intend to say much more soon in a book on the subject.)  It should, however, justify a measure of concern when one encounters the claim that the transference of John to locations after the end of John, or to one side or the other of the Pentecost-lection, or to the end of Luke 21, constitutes “absolute evidence” that these 12 verses were “looking for a home” or similar nonsense.  Such claims say more about the shallowness of the authors’ research than they say about how copyists treated the pericope adulterae and why they did so.

Good job on the research! Experts need to do their homework better than those who have the view you are refuting have done. For someone to cast doubt on a passage as important as this one is a serious thing, if in fact it is genuine. Thanks for helping us out!