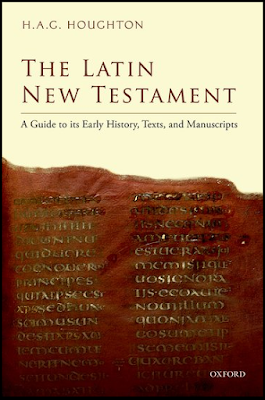 Earlier this year, Hugh Houghton gave the field of New Testament textual criticism a great gift:  a definitive introduction to the transmission of the New Testament in Latin.  His recent book, The Latin New Testament:  A Guide to Its Early History, Texts, and Manuscripts, is excellent.  Metzger’s 1977 description of the Old Latin and Vulgate texts (in pages 285-374 of The Early Versions of the New Testament may now be dismissed in peace, like a candle extinguished at sunrise.
The main text of the book is conveniently divided into three parts:  History (describing the rise of the Old Latin and the Vulgate in patristic times, and their dissemination in the Middle Ages), Texts (describing the various resources and compilations of the Latin text, especially the Vulgate), and Manuscripts (with descriptions of the features often found in Latin manuscripts, and a remarkably thorough catalog of Latin manuscripts of text-critical importance.  The bibliography, appendices, and indices occupy the final third of the book.
Houghton’s account of the development of the Old Latin version is full of fascinating details which may cause even experienced researchers to wonder if they have given the Old Latin evidence the attention it deserves.  For example, in the course of making a case that the Old Latin witnesses of the Gospels share a common Latin ancestor, Houghton does not neglect to mention the example from Mark 9:15, which has been enlisted for this purpose for a long time:  gaudentes (rejoicing) appears in the Latin text of “all pre-Vulgate Latin manuscripts,” which seems to imply that behind them all there was a Greek text which read προσχέροντες (i.e., minus itacism, προσχαίροντες), as in Codex Bezae, rather than the usual reading προστρέχοντες (running).  This example, however, is not left to carry the case by itself; Houghton also cites readings in the majority of Old Latin copies in Luke 1:9, Luke 9:62, Luke 22:11, Matthew 27:60, and more.
It is still possible to believe Augustine’s statement (in De Doctrina Christiana, ) that “The Latin translators cannot be counted.  For whenever, in the first ages of the faith, a Greek manuscript came into the hands of anyone who had also a little skill in both languages, he made bold to translate it forthwith.”  However, the shared anomalies in the Old Latin manuscripts – some of which imply a shared Greek base-text, or the same rendering of once-used Greek words – imply that these translators did not work in full independence; we must picture them sharing a Latin source and proceeding to adjust it in various ways.
Houghton also makes it clear that despite Aland & Aland’s attempts to downplay Greek text-types, text-type-based categorization is very much alive in Old Latin research.  He presents 14 forms of the Latin text, ranging from the early forms used by Tertullian and the translator of Irenaeus, to the Stuttgart Vulgate text.  Some of the most prominent Latin text-types are:
● K, the text used by Cyprian,
● I, an Italian text closely resembling the Vulgate,
● A, a text used by Augustine,
● R, the text used by Lucifer of Cagliari, and
● S, a Latin text used in .

Houghton also shows that it is important not only to notice textual relationships, but also to detect shared features in the meta-text (or paratext) of Latin manuscripts:  the formatting of the text, as well as supplemental materials such as canon-tables, chapter-summaries, and even the use of different colors of ink, can contribute to important discoveries.  For example, there are 13 different forms of the capitula (chapter-summaries), and early Old Latin forms are sometimes found in later manuscripts in which the Gospels-text is Vulgate.  The most significant example of these forms of the capitula is KA Cy, which Houghton assigns to the first half of the 200’s.  Although this form of the capitula is found mainly in later manuscripts with an essentially Vulgate text, “The affiliation of the passages quoted in these lengthy summaries corresponds very closely to the text of Cyprian and VL 1” [i.e., Codex Bobiensis].  The significance of this is felt when it is observed that KA Cy describes the pericope adulterae as the sixteenth chapter of John, and thus indirectly constitutes a very early witness for the inclusion of the passage.
Readers of The Latin New Testament will likely gain a new insight or new information every few pages, whether the subject is a Latin manuscript, a lectionary (such as VL 32, from the 500’s), a patristic writer, or a modern-day editor.  After reading this book, it will be obvious that the Old Latin evidence is much more extensive than it was believed to be just 40 years ago.  The use of letters to represent Old Latin manuscripts (such as k for Bobiensis) is manifestly insufficient, and the Beuron system which Houghton uses throughout the book will inevitably replace it; indeed it must replace it in order to allow all relevant Latin witnesses to be coherently identified.
Sixteen illustrations supplement the text (including a photo of Codex Complutensis with the Comma Johanneum), but a far greater supplement is the provision of links to digital photographs of many of the manuscripts in the catalogue in chapter 10.  This represents a real step forward, allowing readers the ability to virtually see many of the manuscripts online.  The Vetus Latina website, which Houghton maintains, helpfully supplements the book, and so does his website.  One can find there, among other things, a list of Old Latin Gospels-manuscripts (many of which have been fully digitized), Houghton’s article Latin Chapter-divisions, Capitula Lists, and the Old Latin Version of John, and his essay on the text of Luke in VL 11A, which appeared in the Festschrift for the great Roger Gryson, one of the giants, with Bonifatius Fischer, Hermann Josef Frede, and others, upon whose shoulders Houghton stands.

It is traditional for authors to say that if they have seen further than their respected predecessors, it is because they are dwarves standing on the shoulders of giants.  Readers of Houghton’s work, however, may be justified if they adjust the axiom somewhat, recognizing that they are reading the work of a giant standing on the shoulders of other giants in a relatively obscure field that has finally been made accessible, comprehensible, and up-to-date.
Last but not least, let us applaud the publisher, Oxford University Press, for distributing this monumental book at a reasonable price:  Amazon offers the hardcover edition for $39.95, and the Kindle edition for $14.57.

The Latin New Testament:  A Guide to Its Early History, Texts, and Manuscripts, is © H.A.G. Houghton 2016, and is published by Oxford University Press.
Posted by James Snapp Jr at 5:04 AM