Some additional information about early attitudes regarding fasting can be found in an annotation, consisting of an extract from a composition known as the Apocalypse of Elijah, which follows the end of the book of Acts in Sahidic MS Or. 7954, which is probably contemporary with the copyists who produced Codex Sinaiticus.  E. A. Wallis Budge drew attention to this material in 1912 (on page lv of Coptic Biblical Texts in the Dialect of Upper Egypt).  The manuscript was produced in 300-350.  While the possibility exists that this note was added later – even considerably later – Budge regarded this possibility as one which the evidence does not compel, and Herbert Thompson (in 1913 in The New Biblical Papyrus) concurred that the evidence is inconclusive about this.
Following Thompson’s translation of the note (on pages 10-11 of The New Biblical Papyrus), its pertinent portion reads as follows:


“God pitied us by sending his Son into the world (κόσμος) that he may save us from the bondage (αἰχ.).  He did not [send an?] angel (ἄγγελος) to come to us (?) nor archangel (?) (ἀρχάγγελος), but He was changed . . . . . (several lines lost) . . . . . the earth on account of these deceivers (πλάνος) who will multiply at the end of the seasons, for they will set up teachings which are not from God, who will reject (ἀθετειν) the law (νόμος) of God, they whose god is their belly, who say that there is no fast (νηστεία), nor hath God appointed it, who make themselves strangers to the covenant (διαθήκη) of God, who deprive themselves of the glorious promises, who are not established at any time in the strong faith (πίστις).  Do not let them deceive (πλαναν) you [in] these things.  Remember that the Lord brought (?) fasting (v.) ever since he created the heavens . . . . . . men on account of the sufferings (πάθος) and the . . . . . on your account . . . . . .”


This witness shows that individuals known to the author of the Apocalypse of Elijah regarded fasting as a human invention.  On one hand, one could propose that no one, had his Gospels-text contained Jesus’ commendation of fasting, would invent such a view.  On the other hand, if regular fasting (i.e., twice-weekly fasting) is in view, then one could propose that those holding such a position may have been strongly motivated to slightly adjust their Gospels-text to either strengthen their position, or to weaken that of their opponents.
We now turn to Codex Sinaiticus.  The main copyist wrote Mark 9:29 without και νηστεια, but the words were subsequently added, using a kai-compendium.  To those who have seen Vaticanus’ reading, the non-inclusion of και νηστεια by the initial copyist of Aleph is not surprising, considering that Sinaiticus and Vaticanus, despite their very many disagreements, are both regarded as flagship manuscripts of the Alexandrian Text of the Gospels (outside of John 1:1-7:38, where Sinaiticus’ copyist used a secondary exemplar, the text of which had “Western” affinities).
Vaticanus and Sinaiticus share the shorter reading of Mark 9:29, and the non-inclusion of the parallel-verse Matthew 17:21.  While they are almost the only witnesses for the non-inclusion of και νηστεια in Mark 9:29, they are members of a wider alliance in Matthew 17:  Willker lists Θ 0281 788 33 579 892* 1604 and 2680 as manuscripts which likewise do not include Mt. 17:21; they are joined by two Old Latin copies (e and ff1), the Sahidic version, mae-2, the Old Georgian, and the Sinaitic Syriac, the Curetonian Syriac, and the Palestinian Syriac, as well as some Bohairic copies.
Matthew adds some chaos to our equation, so to speak.  Non-specific patristic utilizations of this sentence might be based on Matthew, or on Mark.  Furthermore, as Willker deduced, if the inclusion of Mt. is secondary, “then it must be a harmonization to the Markan Byz text” – that is, if the inclusion of Mt. is not original, then the ancestries of all the witnesses that include Mt. have been influenced by a text of Mark that included και νηστεια.  The significance of this point becomes clear when one realizes that the inclusion of Mt. 17:21 is attested by such early and diverse witnesses as Origen (in his Commentary on Matthew, Book 13, chapter 7), Chrysostom (Homily 57 on Matthew), most Old Latin copies, the Peshitta, D W 700, etc.
It is remarkable that of the two most important Middle Egyptian witnesses to the text of Matthew, mae-1 (Codex Scheide, from the 400’s) includes Mt. , although mae-2 (Schøyen MS 2650, assigned to the early 300’s) does not include it.
Before moving on from Codex Sinaiticus, let’s consult a passage in this manuscript from outside the Gospels:  the apocryphal book of Tobit, chapter 12, verse 8.  Where we would expect a reference to prayer and fasting, we find instead a reference to “prayer with truth” (or, with sincerity).  Vaticanus and Sinaiticus do not agree in this passage; in Codex B, as in the Vulgate, the verse includes a reference to fasting. 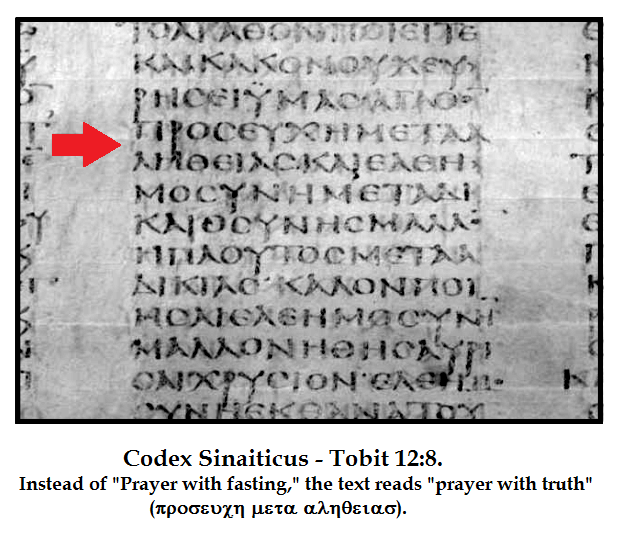 In Sinaiticus, the reference to fasting has been removed, and a reference to praying with sincerity has taken its place.  Should we conclude that the text of Tobit 12:8, in ancestors of B and the Vulgate, was corrupted by copyists who wished to insert a reference to fasting?  Or is the correct deduction, instead, that Codex Sinaiticus displays here an attempt to obscure, via textual tampering, the significance of fasting?  Sinaiticus has the longer form of the book of Tobit (“GII”), and this form, which features various Hebraisms, and which is supported by the Cave IV fragments of the Dead Sea Scrolls (for details see the introductory essay to a recent translation of Tobit by Alexander A. Di Lella), is generally thought to pre-date the shorter form (GI); however, that does not necessarily resolve this particular question; in Di Lella’s translation of both forms of Tobit, the reference to fasting in 12:8 is retained in the text.

(Two tangential points should be noted regarding the text of Tobit.  First, if Di Lella is correct that the shorter form is a condensation of the longer form of Tobit’s text, this is an interesting piece of evidence against the often-abused text-critical axiom that the shorter reading is to be preferred.  Second, the use of one form of Tobit by a copyist of B, and a different form of Tobit by a copyist of א, indicates that B and א were not both among the 50 codices prepared by Eusebius for , contrary to Skeat’s proposal.)
Epiphanius of Salamis, who composed his heresy-targeting Panarion in the 370’s, mentioned some heretics who rejected fasting, and others who endorsed extreme fasting.  In Part 26, Against the Gnostics, or Borborites, in 5:8, Epiphanius described a Gnostic position regarding fasting:  “They curse anyone who fasts, and say, ‘Fasting is wrong; fasting belongs to this archon who made the world.  We must take nourishment to make our bodies strong, and able to render their fruit in its season.’”
Epiphanius also mentioned a contemporary person named Aerius who “forbids fasting on Wednesday and Friday, and in Lent and Paschal time.  He preaches renunciation but eats all sorts of meat and delicacies without hesitation.  But he says that if one of his followers should wish to fast, this should not be on set days but when he wants to, “for you are not under the Law.”  (See page 412 of Frank Williams’ and Karl Holl’s translation of Epiphanius’ works, © 2003 Brill.  Selections from the book, including thequotation about the Gnostics, can be accessed online.)
In Part 33, Against the Ptolemeans, -14, Epiphanius affirmed that the Savior desires “that we fast, but it is his will that we keep not the bodily fast but the spiritual, which includes abstinence from all evil.  We do observe outward fasting however, since this can be of some use to the soul as well when done with reason – not in mimicry of someone or by custom, or for the same of a day, as though a day were set aside for it.”  This view collides with the one advocated in Apostolic Constitutions, Book 8, where regular daily fasts were commanded to be observed twice a week.
The text known as the Gospel of Judas, which was mentioned by Irenaeus (unless there was more than one heretical text called the Gospel of Judas), in its 40th section, features an episode in which Jesus is depicting interpreting a vision; the temple, in the vision, is identified by Jesus as a focus of false worship, which is advocated by several men, including one who represents “those who abstain.”  This may be a reference to fasting, but it is more likely a reference to celibacy.
An initial reading of Sayings 6 and 104 in the text known as the Gospel of Thomas suggests that the author was opposed to fasting.  However, Saying 6 opposes prayer and alms-giving as much as it opposes fasting; its real target, apparently, is non-enlightenment.  Saying 104 is interesting:  when the disciples say to Jesus, “Come and let us pray today and let us fast,” Jesus says, “Which then is the sin that I have committed, or in what have I been vanquished?  But when the bridegroom comes out of the bridal chamber, then let them fast and let them pray.”  (Based on the rendering on page 53 of The Gospel According to Thomas, A. Guillaumont et al,  © E. J. Brill 1959.)  The thing to see here is that the author seems to presume that during Jesus’ ministry, not only did Jesus’ disciples not fast during His ministry (in sync with Mark 2:19-20 – though regular, scheduled fasts may be in view), but that Jesus Himself did not fast.
On one hand, one could argue that the author of Gospel of Thomas would not have composed such a saying if his text of the Gospels included a statement by Jesus that implied that He fasted during His ministry.  On the other hand, one could argue that if fasting was assumed to be an expression of remorse or repentance following an act of sin, this could provoke a copyist to remove such a statement from the Gospels-text, lest readers get the mistaken impression that Jesus fasted as an expression of regret about sinning.
Among orthodox believers, fasting was not considered automatically commendable.  (As we have seen, some fasts, on certain days, were specifically prohibited.)  John Chrysostom, in his Fifth Homily on Second Thessalonians (the Greek text of which is in Migne, P.G. 62:464), made an interesting statement about fasting as he commented on Second Thessalonians -12:


“Alms are given only to those who are not able to support themselves by the work of their own hands, or who teach, and are wholly occupied in the business of teaching.  ‘For you shall not muzzle the ox,’ he says, ‘when he treads out the grain.  And the laborer is worthy of his hire.’  So that neither is he idle, but receives the reward of work, and great work too.  But to pray and fast, being idle, is not the work of the hands.  (“to de eucesqai kai nhsteiein argounta, ouk estin ergon ceirwn.”)  For the work that he is here speaking of is the work of the hands.” 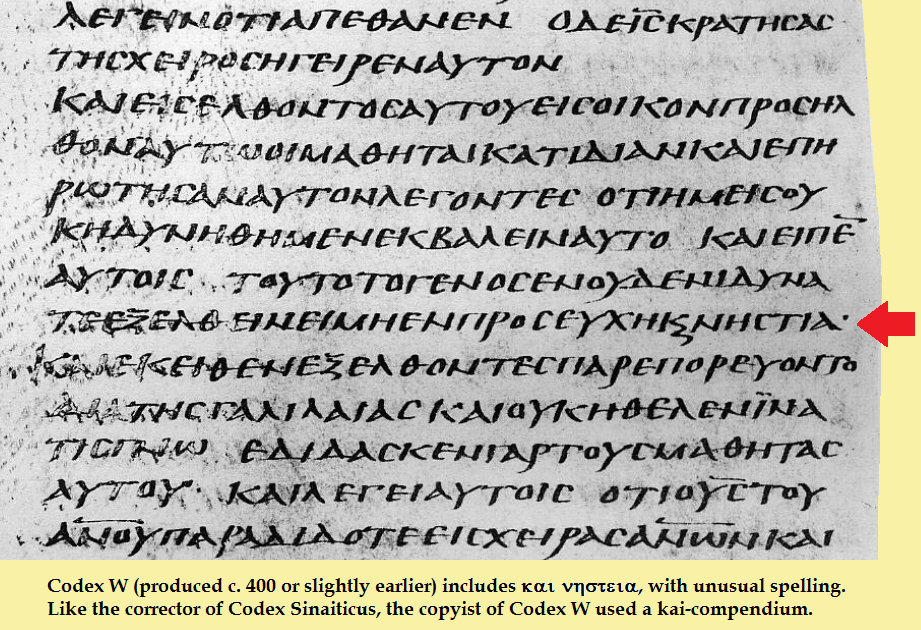 Chrysostom did not oppose fasting, but he clearly regarded it as non-work, not as labor.

Although it has already been stated that all Greek copies of Mark 9:29 – somewhat more than 1,600 manuscripts – include και νηστεια, except for B, Aleph, and 274 (a damaged Egyptian manuscript from the 400’s), it does not seem inappropriate to view one of them, Codex W (032), especially because it has an Egyptian provenance and is a relatively early manuscript.  So here is a picture of part of a page from Codex W, showing that its text of Mark includes και νηστεια.
Codex Bezae (D, 05) also merits special consideration, because it generally represents a transmission-line that is not echoed by most manuscripts.  It includes και νηστεια.
Posted by James Snapp Jr at 10:50 PM