Vaticanus and the Shorter Ending of Mark

Codex Vaticanus is our oldest substantial manuscript which includes most of the Gospel of Mark, having been produced around the year 325.  (P45 is older, but is missing most of its pages from Mark.)  This date is based on paleographical grounds.  We usually have no way of knowing if a scribe was young – say, 20 years old – and had just started his career as a scribe, or if he was nearing the end of his career – at, say, 70 years of age.  So there is a default degree of variation of about 50 years in either direction to most paleography-based production-dates.

But Christians were not likely to be capable of producing manuscripts like Codex Vaticanus – a large parchment book that probably contained, when produced, almost the entire Greek Old Testament and almost all of the New Testament (it is still debated whether or not Vaticanus initially contained the Pastoral Epistles and Revelation) – until the time when copyists could do so without the threat of Roman persecution, i.e., until 313, when Constantine issued the Edict of Milan, declaring that Christianity was a legal religion.  Another factor influencing the dating of Codex Vaticanus is something it doesn’t have:  the Eusebian Section-numbers, which are in the margin of most other Greek manuscripts of the Gospels.  The other famous very large codex from the 300s, Codex Sinaiticus, has the Eusebian Section-numbers, albeit incompletely and somewhat imprecisely.

With the exception of GA 304, a medieval commentary-manuscript which may have been copied from a damaged exemplar, Vaticanus and Sinaiticus are the only Greek manuscripts in which the text of the Gospel of Mark stops at 16:8.  (1420 and 2386, once cited by William Lane as if they also stopped the text of the Gospel of Mark at 16:8, have turned out to merely be damaged MSS at this point.)  The copyist of Vaticanus, though, left a blank space after Mark 16:8, including a blank column – the only blank column in the New Testament.  This blank space is sufficient to include verses 16:9-20, as I have shown here.

Codex Vaticanus itself, though, is the focus of a specific question which can be answered here:  when the scribe of Vaticanus left blank space after 16:8, was he thinking about the Shorter Ending? 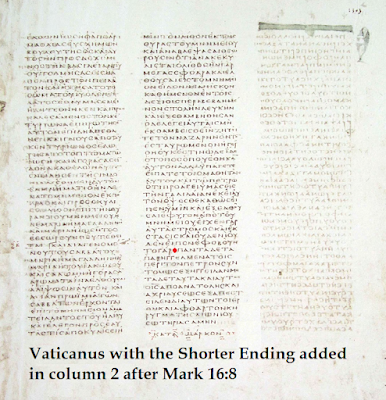 The answer is, “No,” and this is shown by two things:  first, the Shorter Ending fits in the second column in the blank space following 16:8.  Thus there would be no need to leave column 3 blank.  Second, in Ad Marinum (which is available as a free download from Roger Pearse, so there is no need for commentators to keep repeating (and distorting) Metzger’s misleading context-free snippets (looking at you, Ben Witherington III)), Eusebius never mentions the Shorter Ending when, as he addresses a question about how to harmonize Matthew 28:2 and Mark 16:9, he describes what a person might say about the ending of Mark. (Eusebius wrote in the decades which immediately followed the Diocletian persecution, so it should not be imagined that he had the ability to survey MSS beyond his reach.)

The Holy Spirit arranged that with the shorter ending of Mark, his Gospel would have 666 verses.