Minuscule 304, Theophylact, and the Ending of Mark

Minuscule 304 is a medieval Greek manuscript which contains a commentary on Matthew and Mark, along with the text of those two Gospels.  Sometimes, medieval commentaries are formatted so as to surround the Gospels-text:  the Gospels-text is positioned in a small rectangle, near the inner edge of the page, and the commentary occupies the space on the three outer margins of the page.  In 304, however, the Gospels-text and the commentary-text are interspersed:  a segment of Scripture is followed by a segment of corresponding commentary, separated by a small dark circle.
304 is considered to be a very minor manuscript, in terms of its significance for textual criticism, with one exception:  its text of Mark concludes at the end of 16:8.  In the second edition of the United Bible Societies’ Greek New Testament, 304 was not mentioned; minuscule 2386, instead, was listed as if it is the only extant Greek manuscript which ends at the end of 16:8 in agreement with Vaticanus and Sinaiticus.
In 1973, however, Kurt Aland deduced the reason why 2386 does not contain verses 9-20:  a thief has removed the page upon which those verses were written, in order to obtain the illustration of the Evangelist Luke which was on the opposite side of the page.  At that point, 304 was promoted, so that one now finds it mentioned in the textual apparatus as an ally of Vaticanus and Sinaiticus at Mark 16:8 in the fourth edition of the Greek New Testament, and in the 27th edition of the Nestle-Aland compilation.
Let’s take a closer look at 304.  This manuscript is housed at the Bibliothèque Nationale de France – the National Library of France, and page-views of the manuscript, from microfilm, were recently made available.
The catalog-note near the beginning of 304 assigns it to the 13th century, which disagrees with Aland & Aland, who described it as if it was made in the 12th century.  At the beginning of the portion that contains the text of Mark, the title is not “The Gospel of Mark.”  It is, instead, “The  Explanation (Ερμηνεια) of the Gospel of Mark.”  This commentary came to the attention of researchers centuries ago, when a transcription of its contents was printed by Pierre Poussines (also known as Petrus Possinus) as “Codex Tolesanus” in 1673, in Catena Graecorum Patrum in Evangelium Secundum Marcum.

The Gospels-text of 304 is essentially Byzantine, and its commentary-material on the Gospel of Mark consists mainly of a commentary written by Theophylact of Achrida (or Ochrid) (c. 1050-1108), supplemented by comments from various patristic writers, including – according to name-abbreviations which appear in the margin next to the excerpts – Cyril, Origen, Photius, Eusebius, Theodore of Mopsuestia, and Apollinaris, and occasionally an excerpt is attributed to “Others.”   (Similar abbreviations also appear in the margins in the commentary on Matthew, in which Chrysostom’s works are cited very frequently.)
In 1881, Hort mentioned the contents of 304, stating, “The third commentary printed by Poussin likewise comes to an end at v. 8 in the employed by him.  But it is not yet known whether other attest a similar text; and at all events the scholia are here almost identical with those that are attributed to Theophylact, which certainly cover vv. 9-20.”
Indeed, when we compare Theophylact’s commentary to 304, the text-divisions usually correspond exactly.  Most of the comments on Mark in 304 are derived from Theophylact, and this can be confirmed with certainty via direct comparisons between Theophylact’s comments and the comments found in 304.  To demonstrate this important point, here are translations of the beginnings of the comment-segments in 304, and the beginnings of the comment-segments in Theophylact’s commentary, throughout Mark chapter 15:

● After 15:28 (which is not in the Alexandrian Text) –
There is some difference in content and order, but in 304, sixteen lines into the comment, and in Theophylact’s commentary at the outset of this segment, we find this statement:
304 –There is an old tradition which says that Adam was buried in that place, where Christ was crucified, so that in the place where death began, it would also meet its end.
Theophylact – There is a tradition handed down from the holy fathers which says that Adam was buried in that place . . . so that where death began, there also death would be destroyed.
(This tradition, by the way, is why medieval illustrators sometimes drew a skull-and-crossbones at the base of the cross, representing the corpse of Adam.)

After this, 304 has an excerpt which is assigned to Hesychius, beginning with Ακριβατε, about what Matthew and Luke say about the two thieves.

● After –
304 – Joseph of Arimathea, though being a servant under the decrees of the law, understood Christ to be God . . .
Theophylact – O Blessed Joseph!  Though a servant of the Law, he perceived the divinity of Christ . . . 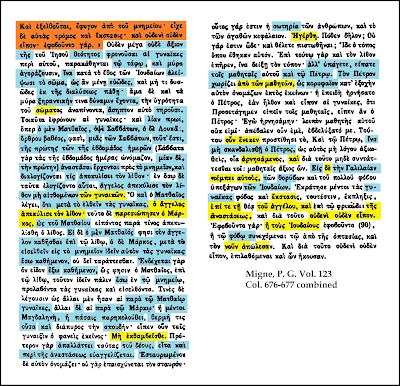 This very close relationship between Theophylact’s commentary and the commentary-material in 304 continues into chapter 16, as shown by this picture, in which the Greek text of Theophylact’s comments on Mark 16:1-8 are highlighted in blue when there is a verbatim correspondence in 304, and in yellow where the match is out of order or otherwise approximated.

When one looks at the final lines of the commentary-material in 304, the text ends as follows:  Η υπο του φοβου τον νουν απολεσασαι. (“Out of fear, they had lost their minds.”)  This corresponds to similar material in Theophylact’s commentary.  (In Theophylact’s commentary, there is another sentence after this, stating, And because of this they said nothing to anyone, ignoring even what they had heard. – Και δια τουτο ουδενι ουδεν ειπον,  επιλαθόμεναι και ων ηκουσαν.)   There the text of 304 ends, without any special marks (other than the usual dark circle that separates the commentary-material from the Scripture-text) – not even the “+” marks that appear in 304 at the end of the commentary on Matthew.  There is no closing-title.  There is not even an “Amen.”  (The opposite side of the page contains scrawled notes which are not part of the commentary.)
There is, however, a faintly written note which indicates that this is where the exemplar of 304 ended.  Beginning on the very next line after the last line of commentary-text, and preceding the damage to the lower margin of the page, it runs as follows:

As travelers rejoice on their homeland to look,
Thus also the scribe at the end of a book.

Below this, in even fainter lettering, someone has repeated part of the first line of this little note, but then the damage takes over and nothing else is legible.
A similar, slightly longer note is also found in 304 below the end of the commentary on Matthew.  (Similar notes are found in other medieval manuscripts, such as Lectionary 1663.)  There, the format is different:  the end of the commentary is signified by a plus-mark (“+”) at the end of the last line of text, followed by another line occupied solely by two additional plus-marks, before the note is written (followed by two more lines of text).

All things considered, the following points should be clear:
(1)  Pending further research, 304’s testimony to the ending of Mark at 16:8 should be considered highly dubious, inasmuch as Theophylact’s Explanation of the Gospels, the main source of 304’s Gospels-text and commentary-text, continues, not only with another sentence about Mark 16:1-8, but with two more segments, the first of which explains Mark 16:9-13 (beginning with a sentence descended from one that is also found in Eusebius’ Ad Marinum, stating that the opening phrase of 16:9 should be read with a pause) and the second of which explains Mark 16:14-20.
(2)  Considering the essentially Byzantine nature of the text in 304, it seems very likely that 304 was copied from a damaged exemplar which was missing its final pages, rather than that 304 echoes an exemplar which was designed to display Mark 16:8 as the final text of Mark with no further comment.
(3)  One cannot absolutely rule out the theory that (a) the exemplar of 304 contained a note similar to the one mentioned by Migne in a footnote in P.G. 123, found in “Codex 26”:  “Some who have commented on this passage say that Mark’s Gospel ends at this point [at 16:8] and that the remainder began its existence later.  An explanation of this passage is also necessary in order that no injury may be done to the truth,” and (b) on the basis of the first part of this note, the scribe of 304 boldly decided to abstain from copying any further text or comment.  However, this theory seems highly unlikely, inasmuch as the copyist displays no intention of altering the text according to patristic observations about variant-readings elsewhere in 304 (such as at Matthew 27:16-17 and Mark 1:2).
(4)  If manuscripts which contain Theophylact’s commentary interspersed with the Gospels-text can be shown to share a particular collection of fairly unique readings (such as τον Ιησουν at the end of Mark 16:1), their weight should be considered collectively, rather than individually, and these manuscripts’ texts could plausibly be regarded as very extensive quotations made by Theophylact, rather than as continuous-text Gospels-manuscripts.
(5)  More research on Theophylact’s Gospels-commentary would be welcome.  A good start (for any aspiring researcher) might involve a comparison of 304 and 2214.  2214 is another 13th-century copy of Theophylact’s commentary in which the Gospels-text and commentary-material are arranged in alternating segments.  It was thought to be lost in the 1980’s, but it is not lost; it resides as MS #233 at the in .  Future investigators of Theophylact’s commentary and his Gospels-text should also look into minuscule 2879, which is at .

Thanks James, it is helpful to know that this manuscript did end at 16.8.