In Luke 2:22, there is a mildly famous – or infamous – textual variant which involves the Textus Receptus, the base-text of the KJV:  did Luke write that “the days of her [that is, Mary’s] purification according to the law of Moses were accomplished”?  That is how the passage is read in the KJV.  The NKJV, MEV, the Rheims New Testament, the New Life Version, the NIrV, and the Living Bible read similarly.  The phrase is different, however – referring to the days of their purification – in the ASV, CSB,  EHV, EOB-NT, ESV, NASB, NET, NLT, NRSV, and WEB.  (The NIV inaccurately avoids saying either “her” or “their,” and simply says vaguely that “the time came for the purification rites.”  The Message hyper-paraphrase makes the same compromise, saying that “the days stipulated by Moses for purification were complete.”  Other versions that have rendered the passage imprecisely include the CEV, ERV, and GNT.) 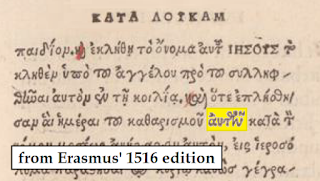 This little difference is a big deal to some champions of the KJV, who regard the KJV’s base-text as something which was “refined seven times” (cf. Psalm 12:6) in the course of the first century of the printed Greek New Testament.  D. A. Waite wrote as if the reading αὐτῶν implies that Jesus was a sinner:  “The word her is changed to their, thus making the Lord Jesus Christ One Who needed "purification," and therefore was a sinner!” (p. 200, Defending the King James Bible, 3rd ed., Ó 2006 The Bible for Today Press)  Will Kinney, a KJV-Onlyist, has written, “The reading of HER is admittedly a minority reading, but it is the correct one.” 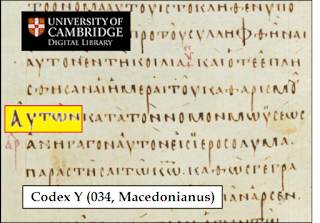 In 1921, William H. F. Hatch, after investigated this variant, reported in the 1921 (Vol. 14) issue of Harvard Theological Review (pp. 377-381) that “The feminine pronoun αὐτῆς is found in no Greek manuscript of the New Testament.”  Quite a few manuscripts have been discovered since 1921, but I have not found any Greek manuscripts that support αὐτῆς (though it is possible that αὐτῆς might be found in very late manuscripts made by copyists who used printed Greek New Testaments as their exemplars).
Hatch explained that À A B L W G D P and nearly all minuscules support αὐτῶν, and αὐτῶν is also supported by the Peshitta and by the Harklean Syriac, the Ethiopic, Armenian, and Gothic versions.  He observed that Codex Bezae (D, 05) has neither αὐτῆς nor αὐτῶν, but αὐτοῦ (“his”), and at least eight minuscules (listed in a footnote as 21, 47, 56, 61, 113, 209, 220, and 254) have this reading as well.  Also, αὐτοῦ is supported by the Sahidic version.  Latin texts are rather ambiguous on this point, whether Old Latin or Vulgate; the Latin eius can be understood as masculine or feminine (but not plural).  Hatch also noted that “A few authorities have no pronoun at all after καθαρισμοῦ,” but he did not specify which ones.

Hatch advocated a relatively not-simple hypothesis:  that most of the first two chapters of Luke were “based on a Semitic source” and in this source, the wording in the passage meant “her” purification but “Luke, or whoever translated the source into Greek, having read in the preceding verse about the circumcision and naming of Jesus, took it as masculine, ‘his purification,’ and translated it by καθαρισμοῦ αὐτοῦ.”  Hatch proposed, further, that before the time of Origen, someone realized that αὐτοῦ could not be correct (inasmuch as the law of Moses says nothing about the purification of male offspring) and changed it to αὐτῶν.

“Αὐτῆς,” Hatch wrote, “appeared as a learned correction, but its range was extremely limited until the appearance of the Complutensian edition in 1522.”

Another detail in Hatch’s 1921 essay is worth pointing out:  he insisted, in his fourth footnote, that minuscule 76 is not a witness for αὐτῆς, and referred to C. R. Gregory’s examination of 76 in 1887 as support for this.  To this day, minuscule 76 is erroneously claimed to read αὐτῆς by James R. White (The KJV-Only Controversy, p. 112 in the 2009 edition; p. 68 in the 1995 edition, both published by Bethany House Publishers) – adding to the book’s many inaccuracies – and by online apologist Matt Slick, and by James D. Price, and by the notes in the NET (Dan Wallace, Senior NT editor).  This falsehood was corrected 101 years ago.  Maybe within another hundred years, some editors will repair the works of James White and the notes in the NET, et al, so that their false claim does not continue to be spread in perpetuity.

GA 76 can be viewed online at CSNTM.ORG, and it's reading of αυτών easily verified there.

Tyndale (1526) and the great bible (1539) kept "their" in their translations per Erasmus' Greek text (all five editions of the TR by Erasmus read "their"). The first emendation with "her" appeared in the Geneva bible (1560) and it seems to me that that came as a theological correction as the purification law is applied only to women plus the reading in the Vulgate. Wycliff had interpreted the Latin words "purgationis eius" as the purification of Mary. The bishop's bible followed the Geneva emendation and so did the translators of the KJV. As to the "αὐτῆς" found in the Complutensian polyglot, it is a great mystery. I'm inclined to think that Cardinal Jimenez may have found that reading somewhere in a Greek manuscript. I have compared some verses in the Latin and the Greek columns in the Complutensian Polyglot and have concluded that the his Greek text differs from the Latin at times (sometimes he did not find a Greek manuscript that corresponded to the Vulgate and left it blank!), which seems to suggest that he followed the Greek manuscripts available to him without engaging in back-translations.

Jesus was circumcised and also was baptized. One could argue that would make Him out to be a sinner also. But if He could suffer those two rituals without being condemned as a sinner, surely this purification does not cast Him as a sinner either.


Did NET copy from Comfort's commentary?

Ross,
Which book of Comfort's are you thinking of?

MAR,
Yes; if you follow the embedded link where I mention minuscule 76, it goes straight to the images at CSNTM.
JSJ

Well, it doesn't look like anyone else could find any manuscripts that meant "her" in Greek, either. That leaves a number of noticeable places where the Textus Receptus (at least since Beza) has no, or very little, known Greek manuscript support before 1514, when printing by Ximenez and Erasmus disrupted the hand-copying process by which the Scriptures had been preserved up to that point.

Some of these textual variants did not exist until about three-quarters of the way through the history of the New Testament text's transmission and preservation. Thank you, James, for publishing a blog about this, and also thanks to Maurice Robinson for publishing a Greek New Testament with the truly traditional readings in these places.

Here's another good article about this textual variant https://carm.org/king-james-onlyism/luke-222-and-king-james-onlyism/ ; unfortunately it wrongly says that Minuscule 76 says "her". It notes how people who believe that one Bible translation is *always* right (whether the Latin Vulgate or the common English one) are sometimes very inconsistent about how they look at manuscript evidence for their preferred version and for other versions. The facts are used or dismissed to fit the idea that one Bible is infinitely better than all others by what I suppose is a misplaced faith, because neither of the Bibles (or God) actually tells them that it is the one and only translation (and one or both of them has a few results of copying errors).

Thank you for the correction regarding Minuscule 76. I am the author of the article on CARM related to this passage, and it was my error and not that of Matt Slick. I take full responsibility. I have corrected the mistake and inserted a paragraph admitting my original error. I genuinely appreciate your correcting me on this.

Thanks a lot, Luke, for the quick correction on that page! It was a relatively minor thing and the page was recommended nevertheless, but the prompt correction of the error is great to see!