Lessons in Ligatures from GA 260

Minuscule 260 is a Greek manuscript of the Gospels produced in the 1200s.  Though not particularly old, it displays the oldest form of the Byzantine text (Kx), very accurately written. The copyist of 260 had very clear handwriting which allows aspiring Greek manuscript-readers to get a good idea of how some medieval copyists blended together letters (and contracted and stacked them).  Let’s tour some features in GA 260 which collective give some lessons in ligatures. 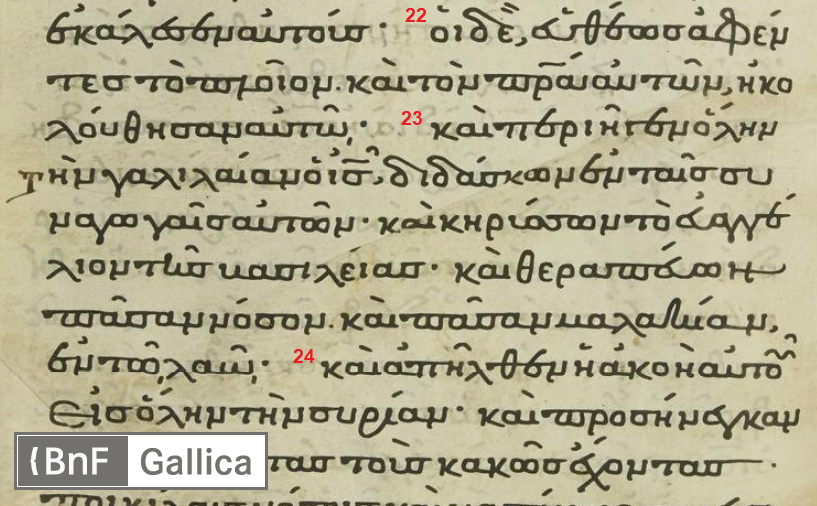 Mt 4:22-24 – Notice here the initial in the left margin in verse 23.  The initials in 260 before Mt. 7:11 are written rather sloppily in black; after this the initials are neatly written in red.  The Eusebian section-numbers are also missing until #54 (ΝΔ) at Mt. 7:12.  Also notice the nu at the end of therapeuon in v. 23 and the stacked upsilon at the end of autou in verse 24.

Mt. 6:18 – Here is another stacked upsilon.  One can also see a stacked omega at the end of kruptō in v. 19.  This is not a textual variant; it was simply the copyist's way of conserving space at the end of a line (the same word, without letter-stacking, appears one line later.

Mt 7:1-2 – Here (underlined in yellow) we see the true text, not the Textus Receptus' αντιμετρηθησεται.  Also notice how the copyist used a minimum of strokes to write -ete and -et-.

Mt 7:4-5 – Here we see the word kai ("and") contracted as a kai-compendium.  We also see the word sou written in stacked letters. 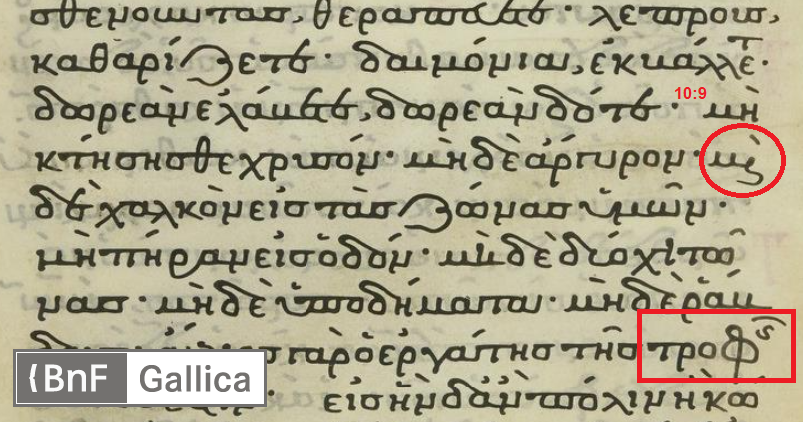 Mt. 10:8b-10 – Besides the lack of any mention about raising the dead, notice how mh is written with the eta forming a downward swoosh.  Also notice how eta is only implied (by a diacritical mark) in the  word τροφῆς.

Mt 12:11-12 – Notice how the copyist has written the final syllables of sabbasin and kalos.

Mt 19:19 – Besides noticing that there is no sou after the contracted patera, notice the variant involving haplography in the last word on the page (os eauton rather than os seauton) and how its final syllable has been written. 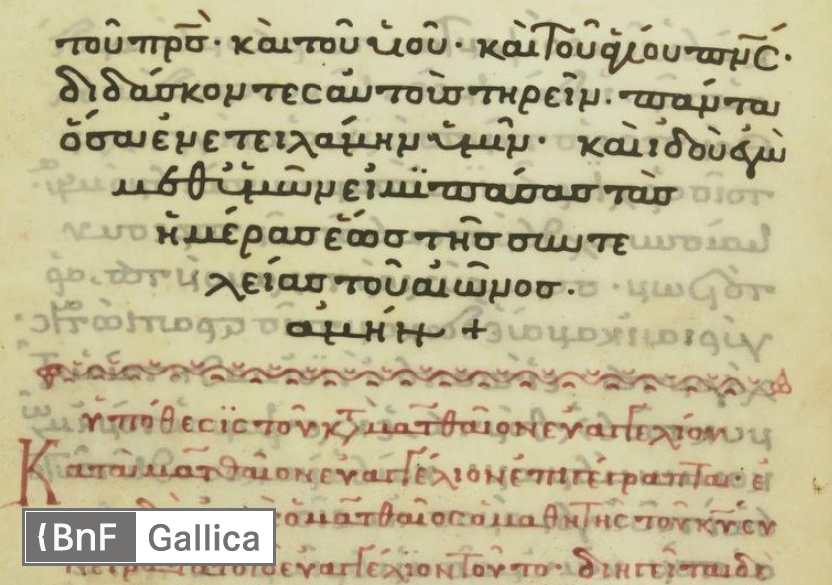 Mt 28:19-20 – Even in the triune baptismal formula, huiou is not contracted.  Also notice how the letters in v. 20 are written in a centered vortex.  And notice how the nu is written in Amen at the very end of verse 20.

Mark 2:18 – Here we see one of the copyist's rare parableptic mistakes.  A secondary hand has supplied the missing words in the margin.  Also notable:  how the copyist has written dunantai in v. 19.

Lk 6:48 – Notice the stacked letters of tē and the lettering of the final syllable of petran.

Lk 8:6 – Kai is written in a different compendium-form here.  Also notice that the copyist has written around a small hole, which must have been in the parchment before the copyist wrote. 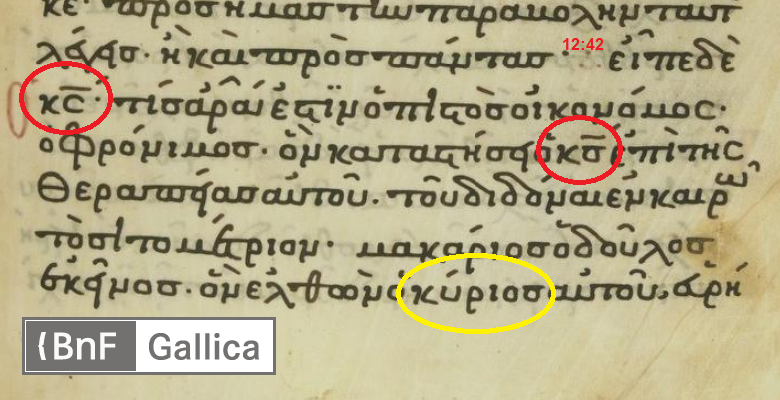 Lk 12:42-43 – Although the copyist often wrote kurios as a contracted sacred name (as seen here twice, he also wrote kurios uncontracted in a context in which the referred-to lord is not necessarily the Lord.  Also notice the stacked omega in kairo. 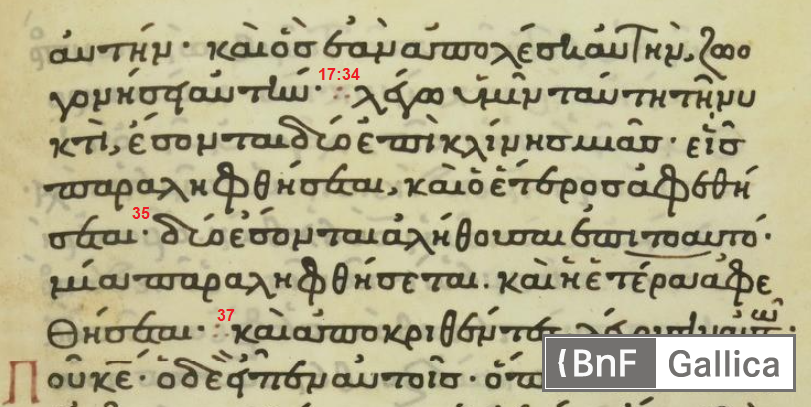 Jn 6:24 – Notice how estin is written.  Also, the word autoi, which one would expect to find between the last word of the first page  and the first word of the second page, is absent.  GA 260 is not the only manuscript in which this autoi is missing; it's also missing in Codex Sinaiticus (though a later corrector has added autoi above the line) and Codex S (028).

Jn 19:37 – Notice how the copyist has written meta at the beginning of v. 38.  Also notice the lectionary-rubric in the lower margin, added by another hand, informing the lector that he has reached the end of the reading for the ninth hour at Eastertime.

All in all, GA 260 is a very good Byzantine Gospels-manuscript, and its copyist's script is a good example of medieval handwriting.   There are many examples of handwriting in GA 260 worth looking at that are not covered here.  Full-color digital page-views of the entire manuscript can be downloaded from Gallica (as BNF Cat. MS Grec 51), and the entire manuscript is indexed (allowing viewers to search by chapter-and-verse) at CSNTM, which has black-and-white as well as full-color page views of GA 260.