A New Book About the Text of Codex Bezae


You might think that there would be little more to say about the text of Codex Bezae after D. C. Parker’s 1992 Codex Bezae - An Early Christian Manuscript and Its Text.  But Peter Lorenz has a lot more to say in his new book, A History of Codex Bezae’s Text in the Gospel of Mark.  Readers of Dr. Lorenz’s blog will be aware that he has been studying Codex Bezae for some time.  His new book is based on the dissertation that he successfully defended in July of 2020.

Lorenz calls into question the idea that Codex Bezae’s distinctive Greek text of the Gospels and Acts represents an ancient native Greek tradition that begat the Old Latin version(s).  Lorenz argues that the Greek text found in Codex Bezae should be assigned to the late 300s, immediately prior to the production of the manuscript, and represents the conformation of a Greek text to a Latin model (different from the Latin text preserved in the manuscript itself). 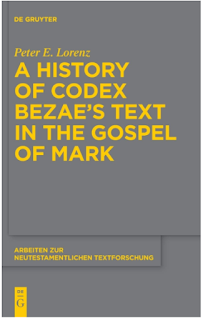 Here are ten intriguing implications of Lorenz’s analysis, in his own words:

● (1) there are very few parallels between Bezae’s distinctive text and Justin Martyr or Marcion, certainly not enough to justify the view that they knew a text like Bezae’s,

● (2) Bezae’s parallels with Irenaeus appear to be secondary relative to this author’s text,

● (5) Bezae’s text does not seem to represent the source of the Latin version or, at least, this version does not require a text like Bezae’s to account for its distinctive readings,

● (6) much of Bezae’s text is quite close to the Greek “mainstream”, much more than is generally observed, it is certainly not a “paraphrase,”

● (9) Bezae’s distinctive variations are not evenly distributed throughout its text but tend to concentrate in certain places,

● (10) Bezae’s producers seem not to have been native speakers of either Greek or Latin.

Incidentally, Lorenz’s research (already released in the Tyndale Bulletin and described at his blog in October 2021) does not bode well at all for the 2011 NIV’s adoption of οργισθεις in its base-text of Mark 1:41.  Bill Mounce, take note!

A History of Codex Bezae’s Text in the Gospel of Mark is available as a hardcover at Amazon for $150 – just in time for Christmas!