Lectionary 60 - The One With Runes

Lectionary 60 was made in the year 1022, and is thus almost one thousand years old.  It has a very unusual feature on its frontis-piece-page (which displays the remains of a picture of Christ, surrounded by symbols of the Evangelists):  runes.  The rune-inscription identifies the manuscript as the property of Saint Dionysius’ church – the famous basilica north of where kings in  were entombed since Dagobert in 639.
Perhaps someone at St.-Denis, noticing that past generations of monks had been obligated to pay Vikings to spare the basilica, and to ransom their abbot, considered it wise to write this note in a language which Vikings could understand – just in case the Vikings might wonder where to send the ransom-note.  Or perhaps a Viking church-member wrote it.
This existence of this lectionary ought to dissuade us from picturing the history of the Greek New Testament as an exclusively non-European thing – as if Greek manuscripts did not show up in western Europe until the 1400s.  Lectionary 60 shows that Greek manuscripts were not only read, but were produced, in in the century before the First Crusade.
This arrangement of the text in Lectionary 60 tends to follow the pattern for the Synaxarion – movable days – given at Robert Waltz’s Encyclopedia of New Testament Textual Criticism.  Beginning at Easter-time, lections (i.e., selections for reading in church-services) from the Gospel of John are presented, along with lections from the book of Acts.  Lectionary 60 has lections for week-days as well as for Saturdays and Sundays.  After Pentecost, the lections are excerpted from the Gospel of Matthew and from Paul’s Epistles, beginning with Romans.  Twelve weeks’ worth of lections later, the lections are taken from the Gospel of Mark and from Paul’s other epistles.  Lectionary 60 has the lection-cycle for Easter-week, with the Twelve Gospel-readings for Good Friday, and the Readings for the Vigil at the first, third, sixth, and ninth hours, other Easter-time readings, and the Heothina-series.  On page 162, the Menologion section begins.
There are, however, variations from the Byzantine pattern – especially when it comes to the lection that was to be read in honor of Saint Dionysius the Areopagite.  This lection was particularly esteemed at the church that was named in Saint Dionysius’ honor.  Why Dionysius had received that honor might take some explaining:
There are three Dionysiuses in the picture.  First there was Dionysius the Areopagite, who was converted to Christianity by the preaching of Paul in , as reported in chapter 17 of the book of Acts.  Second, there was the patron saint of France, Saint Denis (Denis is short for “Dionysius”), a bishop who was beheaded in Paris in a wave of persecution initiated by Emperor Decius in the mid-200s.  (This martyr was commemorated by the famous Oriflamme banner.)  Third, there was the anonymous author of several influential philosophical compositions that were circulated in the late 400s and early 500s; this author is known as Pseudo-Dionysius.
Among medieval clerics who thought that Pseudo-Dionysius was actually Dionysius the Areopagite (an impression which Pseudo-Dionysius’ writings encouraged), there was also confusion between Dionysius the Areopagite and Dionysius the third-century martyr.  This may account for the emphasis (a natural emphasis at the basilica of Saint Denis) on the lection for Dionysius the Areopagite (Acts 17:22-34) in Lectionary 60:  it appears in the lectionary three times.  First, it is written in Greek (but in Latin-like handwriting) on page 55, after an acrostic (ΔΟΞΑ ΤΩ ΘΕΩ ΑΜΗΝ) which interrupts the lectionary-material.  It is also found on fol. 153, in a Latin-like script completely unlike the main copyist’s handwriting; the person who wrote this lection seems to have had a gift for finding unusual ways to spell words in Greek.  (Apparently, there had been blank pages in the manuscript, leftover between sections, and someone used them as the material upon which to write this particular lection.)  And it is written near the very end of the lectionary, in much better (recent?) handwriting, with a Latin heading.
Two lections in two different kinds of handwriting occupy fol. 154a:  Luke 6:17-23 is written, in something like sense-lines, before Matthew 4:25-5:3a.   Near the bottom of the page, there is an inartistic Greek alphabet and, in Latin, a curse upon anyone who steals this holy book from the library of the St-Denis church.  (Another Greek alphabet appears in the lower margin of fol. 82.) 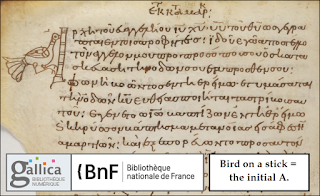 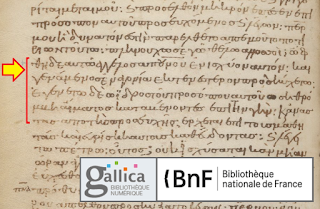 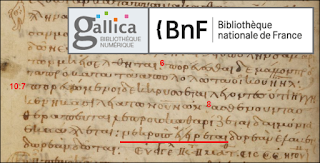 
● The margins of Lectionary 60 have quite a few notes, mostly in Latin.  (They are not all from the same hand.)  For example, on page 154b, where Matthew 1:1 begins the text, the opening Latin phrase of Matthew 1:1 is written in the margin.  130b contains a good example of Latin notes alongside Greek notes.
● On page 55, the lectionary-material is interrupted by an acrostic poem. (The initials say ΔΟΞΑ ΤΩ ΘΕΩ ΑΜΗΝ)  (This is followed by the St. Dionysius lection, already described.) 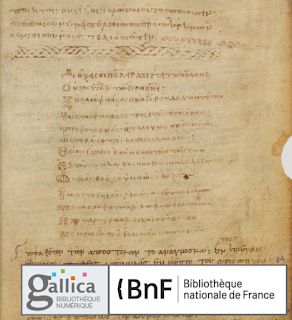 ● The parchment that was used for Lectionary 60 was not of high quality; the copyist(s) frequently had to adapt to uneven pages and pages with holes.
● Lectionary 60 includes lections from Matthew, Mark, Luke, John, Acts, Romans, First Corinthians, Second Corinthians, Hebrews, Galatians, Ephesians, Colossians, First Thessalonians, First Timothy, Second Timothy, and Philippians.
● On fol. 108 there is a little prayer-note in the lower margin.
● Although I did not investigate the question thoroughly, I suspect that at least two copyists, besides later supplement-providers, worked on this lectionary.
● A colophon on fol. 193 supplies the name of a copyist, his location, and the production-date of the manuscript:  ἐτελ[ε]ιοθ[η]  τω παρον εκλογαδ[ιον] δια χειρος Ηλιοῦ πρεσβυτερου κ[αι] μοναχου σπιλεό [?] του μη[νος] Νοεμβριω κς ημερα κυ[ριακῇ], ωρ[α] θ.  τε. ϛφλ ινδ. Ε εν χόρα φραγκι καστρο δε κολόνιας.  –  Something like, “The gift of this Eclogadion was completed through the hand of Elias, presbyter and monk, stained [?] in the month of November, on the 25th day, Sunday, at the 9th hour, year 6,530 in the fifth indiction.  In the country of , in the .”  Someone did the calculations and wrote the implied production-date, 1022, in the margin.

Lectionary 60 is presently housed at the Bibliothèque Nationale de France (the national Library of France), where it is cataloged as Grec 375.  A digital file of the entire manuscript can be downloaded from the Gallica website.