Is Penn Also Among the Prophets? 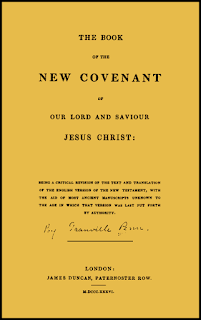 
Penn – grandson of William Penn the founder of Pennsylvania – began his Annotations with a 90-page Expository Preface, in which he briefly surveyed past English versions and past text-critical enterprises (up to the 1830 compilation made by Scholz), and explained his text-critical method.  This preface is sharply written and is still definitely worth reading by students of New Testament textual criticism today – not only to see an erudite textual critic at work, but also to see in action the oversimplified assumptions that led to a nearly complete overthrow of the Textus Receptus.
After the preface, and a lengthy extract from Johann L. Hug’s 1810 work on Codex Vaticanus, Penn provided a point-by-point textual commentary on the text, focusing mainly on passages where the meaning of his base-text is different from the meaning of the rival reading in the Textus Receptus.  Not only did Penn make many insightful observations regarding textual variants, and the meaning of some obscure terms, but he made doctrinal, apologetic, exegetical, and devotional comments as well, as if writing with a pastoral concern for his readers – occasionally drifting into outright preaching.
No doubt it would be edifying to explore Penn’s exhortations in more detail; somehow his study of the same variants that shocked Bart Ehrman 150 years later seems to have left Granville Penn’s faith intact and unshaken.  But today I wish to focus on some remarkable parallels between Penn’s text and the text of the Revised Standard Version (the forerunner of versions such as the ESV, NIV, NLT, and NRSV).  Here are 50 sample passages where Penn’s Book of the New Covenant, in 1836, forecast the contents of the 1946 RSV.  I have added the symbol ♠ to indicate where the RSV and Penn’s compilation agree.  (Penn re-numbered some chapters’ verses; I have resorted to the usual arrangement in this list.)

These readings, mere samples, clearly show that while the New Testament base-text of the RSV – a primarily Alexandrian base-text – can be traced back to the 1881 revision by Westcott and Hort, a very similar compilation had already been created by Granville Penn in 1836 – when Westcott was eleven and Hort was eight.  How did he foresee this?  Is Penn also among the prophets?
What was the method that was used by Penn in 1836, using fewer than 700 manuscripts, and without Sinaiticus, without Washingtonianus, without the Sinaitic Syriac, and without any papyri?  Did Granville Penn develop a coherence-based genealogical method?  No; his method was very simple:  adopt the reading of Codex Vaticanus almost all the time!
To Grenfell Penn, “The only text which we can take hold of, palpably and securely, as having really existed in the most ancient time to which our retrospective researches can attain, is undeniably that of the ‘ MS.’”
In several respects Penn anticipated the theories and proposals that were later expressed by Hort in his 1881 Introduction – including Hort’s pivotal theory regarding conflations.  Penn’s analysis of Mark 6:33 and Mark 9:38 may sound somewhat familiar to those who have read Hort’s Introduction, §134-141.
Penn seems to have sincerely believed that distinct readings in the Textus Receptus “are consequences of the depravation of the copies during the dark ages.”  His belief that Byzantine readings are late accretions provided the platform for its corollary that the oldest manuscripts must contain the oldest readings.
This belief, however, was not confirmed by subsequent research.  In E. C. Colwell’s view, “the overwhelming majority of readings were created before the year 200.”  George D. Kilpatrick proposed (on page 42 of his article The Bodmer and Mississippi Collection of Biblical and Christian Texts) that if one sets aside accidental readings, “Almost all variants can be presumed to have been created by A.D. 200.”  Aland & Aland (in The Text of the New Testament, page 290) have stated, “Practically all the substantive variants in the text of the New Testament are from the second century.”  This may cause some to wonder why the critical text of 2020 is so little changed from the critical text of 1836.

In closing, I would like to raise two questions.
First:  what would happen if compilers of the text of the New Testament, instead of inventing new excuses to adopt the readings in Codex Vaticanus (besides “It’s older!”), acknowledged that the ancient texts displayed in younger manuscripts were transmitted in transmission-lines that were much more stringent than the transmission-lines from which our earliest manuscripts emanated?  That is, what if textual critics stopped favoring a reading on the grounds that it is attested in a manuscript that was stored in a drier climate?  (For this is what one is really doing when one casually adopts whatever reading is attested in the earliest manuscripts because they are earlier:  what was the chief factor that allowed those manuscripts to outlast others, and thus become the oldest, if not dry weather?)  We might then get a truly eclectic text that amounts to something significantly different from what Granville Penn produced in 1836 using the Codex-B’s-God’s-Mouthpiece method.
Second:  seeing that there’s not much special about Westcott and Hort’s compilation, if one were to remove Hort – and his theory about the Lucianic recension, and his séance, and his liberalism, and his racism, etc., etc. – from the picture, one would still have to grapple with the erudite and well-presented arguments that Granville Penn enunciated 50 years before Hort, adding subsequent discoveries to the picture in the process.  How far from the Byzantine Text might that take us?

You may already know this, but in H.J. DeJonge's research on Erasmus(Erasmusian scholar), he said that Erasmus had access to Vatacanus,but refused to use it because it was a "Latinized Text." That's all he said, so I'm not 100% sure what he meant just short of mere speculation. Anyway, Erasmus didn't think it worthy of adding into his edition of the Greek New Testament.

Phil,
If my information is correct, Erasmus had access to a list of 365 readings from Vaticanus, but didn't consider it a valuable witness because he believed that its text had been adjusted to conform to readings of the Vulgate. (The list had been given to him with the intent, I suspect, of showing that the Vulgate had ancient Greek support, but it apparently elicited just the reverse impression, that the codex's text was influenced by Latin readings.) But there seems to have been one reading in Acts 27:15 (Kauda) where, eventually, Erasmus accepted the reading in B.

I wasn't aware of that. Thanks for the update.

Just the right amount of sarcasm :) I'm always glad I to hear I'm not the only who sees the Vaticanus for what it is.

Acts 27:16 (AV)
And running under a certain island which is called Clauda,
we had much work to come by the boat:

In his Annotationes (not the text) of Acts 27:16 (not 27:15) Erasmus cited the Vaticanus Kauda, as referenced by James Keith Elliott here:

As to the Latinizing question, there was quite a back and forth with Sepulveda. Eramsus may have been referring to a proposed changes after the 1400s Council of Florence. John Black of Palæoromaica conjectures also the Laetran Council and the Council of Lyons in the 1200s. Either way, it is unlikely to fit well with Vaticanus, which main writing was almost surely written in the first millennium.