It’s time for a round of hand-to-hand combat!  Today’s arena:  Luke 15:1-10, a famous passage in which Jesus delivers the Parables of the Lost Sheep and the Lost Coin.  The combatants:  Codex Sinaiticus (from c. 350) and minuscule 490 (from the 1000s).  Codex Sinaiticus (À) comes to the fight with a considerable advantage:  copyists had only about 300 years to introduce corruptions into its text, while at least 940 years separate GA 490 from the autograph (positing a composition-date for the Gospel of Luke in the early 60s).  One might naturally expect À to have the more accurate text.  Let’s see if the evidence confirms this.

As in other rounds of hand-to-hand combat, I will make a close assessment of all deviations from the stand-in for the original text; the Tyndale House Greek New Testament serves as our proxy.  Sacred-name contractions and other contractions and abbreviations are not counted as variants; transpositions are mentioned but not treated as losses or gains of materials unless an actual loss or gain occurs.  The recorded text of each MS in the comparison is the text of the MS prior to later, post-production corrections.  After the initial raw data is collected, it will be filtered so as to set aside itacisms and some other untranslatable variants.

Thus, in these 10 verses, Sinaiticus’ text has lost 16 original letters and gained 8 non-original letters, for a total of 24 letters’ worth of corruption.  When we filter out trivial variants, there are only two variants of substance here:  the absence of ουτος in verse 2 and the presence of ου in verse 4, yielding a total of seven letters’ worth of corruption. Can GA 490 do better than that?  Let’s see: 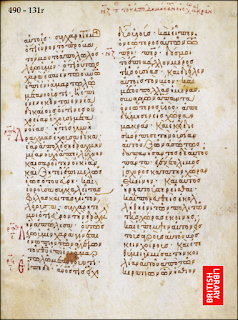 Thus, in these 10 verses, GA 490’s text has lost 5 original letters and has gained 7 non-original letters, for a total of 12 letters’ worth of corruption.  490’s text also contains four transpositions.  When we filter out trivial variants, there are five variants remaining:  (1) the absence of τε in verse 2, (2) the presence of ου in verse 4, (3) εαυτου instead of αυτου in verse 5, (4) οτου instead of ου in verse 8, and (5) τας in verse 9 – yielding a total of 10 letters’ worth of corruption.
So, in terms of strict formal accuracy, 490’s text retains more of the original text, and loses less than À does, by a score of 24 to 12.  But if we set aside matters of spelling, À wins, barely, by a score of 7 to 10.  (One could arguably reduce 490’s score to 9 if one sets aside as trivial the difference between εαυτου and αυτου in verse 5.)