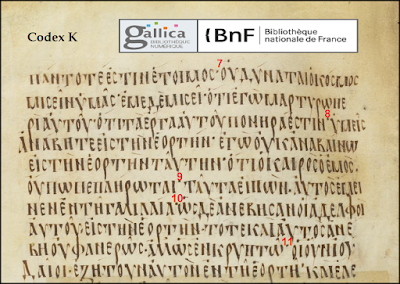 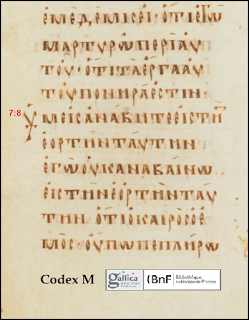 οuκ:  À D K M Π 1071 1241, with versional support from the Vulgate, the Sinaitic Syriac and Curetonian Syriac, the Armenian version, the Ethiopic version, several Old Latin copies (including a, aur, b, c, d, e, ff2), and with patristic support from Epiphanius (in Panarion, Book 2, 25:4), Chrysostom (Homily 48 on John), Cyril  of Alexandria (Comm. John 4:5), Ambrosiaster (Question 78 in his Questions on the Old and New Testaments), and Augustine (in Sermon 83) – plus a comment from Jerome (in Against the Pelagians Book 2, part 17) which implies that Porphyry – a heathen critic of the Gospels in the third century – used the text with οuκ as evidence that Jesus displayed fickleness and therefore was not divine:  “Jesus said that He would not go up, and then did what He had previously said He would not do.  Porphyry rants and accuses Him of inconsistency and indecisiveness, not knowing that all scandals must be imputed to the flesh.” (By this last phrase, Jerome seems to mean that if a passage seems problematic or puzzling to a reader, the problem is not in the text, but in the reader’s lack of illumination.)
The UBS apparatus also lists a few lectionaries that read οuκ here:   lectionaries 672 (an uncial lectionary from the 800s), 673, 813 (from the 900s), 950, and 1223. 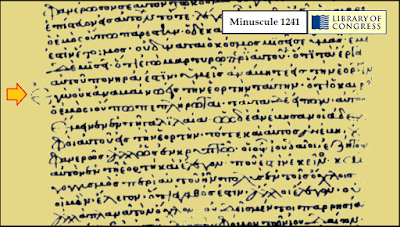 I hypothesize that Christ did intend to tell his brothers that he was NOT going to this festival when he in fact was going to go. Christ had misled others before. (compare Mt 22:16-22 with Mt 17:24-27) When quoting the commandments at Mt 19:18 he said "you must not bear false witness." When he told his brothers that he was not going, though he did intend to go, he did not testify falsely against another, therefore he did not sin. Nor did he lie to a fellow believer (Zech 8:16; Col 3:9) for his brothers were not believers. (John 7:5)

After we are told that his brothers were non-believers, the next words are "therefore" he said to them... Why is "therefore" used? To show that Christ's next words were BECAUSE they did not believe in him. (John 7:6-8) Within those words is his statement that he would not be going to this festival. He said that because they did not believe in him and he probably did not trust them not to turn him over to the Jews.(John 7:11) So he wanted to keep it a secret from his brothers that he was going to the festival. Saying 'I am not YET going' tells them that he IS going.

Dane,
Thanks; the typographical error is corrected.

DAVE commented, "I hypothesize that Christ did intend to tell his brothers that he was NOT going to this festival when he in fact was going to go. Christ had misled others before. (compare Mt 22:16-22 with Mt 17:24-27) When quoting the commandments at Mt 19:18 he said "you must not bear false witness." When he told his brothers that he was not going, though he did intend to go, he did not testify falsely against another, therefore he did not sin. Nor did he lie to a fellow believer (Zech 8:16; Col 3:9) for his brothers were not believers. (John 7:5)"

While true that his familial brothers did not believe who he claimed to be so were "unbelievers in him" in that sense, nevertheless they were his fellow Jews who were believers in, and followers of, the Law given through Moses.

As Lev. 19:11 ("‘You shall not steal, nor deal falsely, nor lie to one another'....") establishes, and as Zech. 8:16 ("Speak each man the truth to his neighbor") affirms, the Law prohibited not only bearing false witness against fellow Jews but also prohibited lying to fellow Jews.