The STEPBible - With David Instone-Brewer

Today, special guest Dr. David Instone-Brewer joins us to talk about the STEPBible, a very useful – and free – digital resource for Bible-related research.  The STEPBible – at www.STEPBible.org – was designed by scholars at Tyndale House in  to assist Bible-readers around the world; this explains its acrostic-name:  Scripture Tools for Every Person.

Q:  Dr. Instone-Brewer, thanks for joining us for this interview.  The STEPBible is an enormous collection of materials for the study of the Bible.  How long did it take to prepare all this?

Instone-Brewer:  I've been working on this since 2012, though of course most of the modules inside it have been available for longer.  Crosswire.org has produced most of the modules in STEPBible, and many of those were ported from previous projects such as OnlineBible.net and UnboundBible.  Other organizations such as OpenScriptures.org, CCAT, ApostolicBible.com, Teknia.com and the Perseus project have provided invaluable data for improving these or making our own. So STEPBible is built on decades of work. And if you include the work by translators, then we start counting in centuries!

Q:  The range of materials available using the STEPBible is vast.  Users have access to the popular KJV (1769 standardization), ESV (2011), and NIV (2011), but also to lesser known English versions such as the World English Bible and New Heart English Bible and The Living Oracles (an American translation made in the early 1800’s).  Even William Tyndale’s New Testament – the first printed English translation – is accessible.  For New Testament textual critics, there is access to a textual apparatus of the entire New Testament that presents not only a comparison of manuscripts but also of some printed editions of the text.
Multiple Greek compilations of the New Testament can be accessed via the STEPBible:  Stephanus’ 1550 compilation, the Elzevirs’ Textus Receptus of 1624, Westcott & Hort’s 1881 critical text (specially formatted to show where the 27th edition of the Nestle-Aland compilation diverges from it), Michael Holmes’ SBLGNT, the historically significant compilations made by Tischendorf (8th edition) and Tregelles in the 1800’s, and the Robinson-Pierpont Byzantine Textform.
What additional features can we expect to see in the future?

Instone-Brewer:  A lot! But we don't want to shout about it too much before bringing them out.  Two of them have already been spoken about publicly, so I'll mention them.  First, morphology for Old Testament Hebrew. This won’t just tell you ‘hophal’, ‘hiphil’ etc, but decode them as ‘passive intensive’ etc, and add explanations and examples, like for the NT morphology.  And, second, a full BDB lexicon for the Old Testament like the LSJ for the NT and LXX. This will be formatted nicely (like the LSJ) so that it will be much more readable than the printed version.
There’s a very interesting project at https://stepweb.atlassian.net/wiki/spaces/SUG/pages/7766018/Manuscripts+and+Meanings .  We are still looking for volunteers to help with the final edit of this resource, so if you love the Bible and have good English and a few hours a week, we'd love to get you involved.

Q:  It sounds like the STEPBible allows users to dig pretty deep into the text, and these planned new features will facilitate research in even greater detail.
Along with English translations, there are materials that textual critics will find helpful such as English translations of the (Syriac) Peshitta, the New Testament in Sahidic (including the Sahidica texts edited by J. Warren Wells), and several editions of the Vulgate.  There are even transcripts of two important Hebrew manuscripts (the Aleppo Codex and the LeningradCodex).
There’s a pretty impressive linguistic range to the STEPBible’s design, too.  I noticed that it has translations of the Bible (or New Testament) in English, French, Arabic, Spanish, Swahili, Russian, German, Hebrew, and more, including over 200 languages limited mainly to Papau New Guinea.  Is the STEPBIble able to be used in all of those languages?

Instone-Brewer:  The STEPBible’s interface can currently be rendered into 59 different languages.  If a user clicks on the “Language” option in the top right menu, these languages can be selected, and you can switch to them.  Don’t worry if all your menus become indecipherable; you can get back to normal by selecting English. But most people never need to change because the menu system is automatic. Open STEPBible in Hong Kong and it will be in Traditional Chinese, and open it in and it will be in Arabic.  It opens in whatever language your computer normally uses.

Q:  What if someone wants to use the STEPBible to study the Bible somewhere that does not have reliable internet access?

Instone-Brewer:    From the ground up, STEPBible was designed to run without the internet – a tall order for a dynamic web-based program. But it works!  All you need to do is click on “Help” at www.STEPBible.org and then “Download,” and chose Mac or PC. The installation program is large, so make sure you do it with on a cheap or free wi-fi connection. It downloads a small group of Bibles, and you can add as many as you like.

Q:  So after that initial download, the materials can be accessed anywhere.  How do you hope preachers and missionaries around the world will use the STEPBible?

Instone-Brewer:  The centre of STEPBible is the Bible itself.  We want people to read it.  Lots of other good programs enable you to do that of course, but we want people to be able pursue an investigation as far as they want, for example:
● What was the Hebrew or Greek word that was translated this way?
● What does that word mean?
● Where else is it used, and how else is it translated in my Bible?
● What did it mean to the first readers?
● How was it used by other authors?
And so on.  Few people will want to pursue questions to this kind of depth but we want them to be able to go wherever their curiosity takes them.

Q:  New users who might assume that it is a lot to navigate are advised to use the Help-button in the upper right of the STEP Bible’s website to get acquainted with the vast digital landscape.  Selecting “Available Bibles” from the sub-menu will take the visitor to a page which serves as the trunk from which branches of materials extend:  Bible versions, commentaries, dictionaries (including the Teknia Greek Dictionary), and a Take-the-Tour introduction.
But despite this abundance of materials, some things are noticeably absent.  Why no NLT, NRSV, or CSB?

Instone-Brewer:  STEPBible is free, because we are aiming specifically at helping the disadvantaged world. This means, unfortunately, that we can only include commercial Bibles if the publishers allow us.  Some publishers have been very generous:  Biblica (for the NIV and many others), Crossway (for the ESV), Lockman (NASB) Holman (for CSB), and Bible.org (for NET Bible).  You'll notice that I included the CSB in that list – but it still isn’t on the STEPBible site. I’ll have to chase it up! 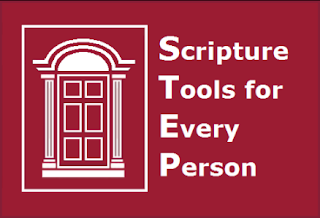 Q:  So that is on the way.  Finally, is there anything you would like to share with potential STEPBible users around the world?

Instone-Brewer:  I use it all the time myself, even though I own lots of other software. Usually I use it just to read the text.  The advantage is that if a question comes to mind (as they often do), I can quickly follow it up.  At home and work I’m surrounded by commentaries and textbooks that will give me pre-digested conclusions, but STEPBible puts all the facts at my fingertips to explore by myself.  I love it.

Q:  Thanks for sharing this information about the STEPBible.

The STEPBible offers free resources that are very useful for Bible students around the world, from complete beginners to seasoned scholars.  I encourage everyone to make the most of this tremendous collection of resources.

It's a wonderful project. Are there any plans to add any other secondary literature e.g. relevant journal articles?

Thank you very much for this, it really helps. Many blessings.