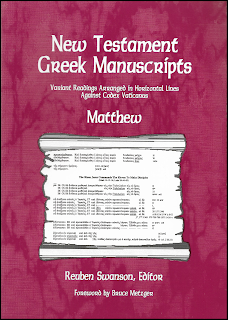 Thus a careful comparison of the text of NA in Matthew 28 shows that its compilers’ use of the Byzantine Text is evident at the following points:
● In verse 3, where NA has ειδέα instead of ειδε.
● In verse 7, where NA has ειπον instead of ειπαν or ειπα.
● In verse 14, where NA has the word αυτον, within brackets.
● In verse 15, where NA has the word τα.
So one could say that the compilers of the NA/ text manifested their use of the Byzantine Text in Matthew 28’s 329 words via the adoption of four words.  Thus, calculated by words, 1.2% of the text of NA in Matthew is distinctly Byzantine.  Calculated by letters – nine out of 1,706 – the percentage is slightly above .5%.  (Most of the Gospels-text of NA is not distinctly attested by any single text-type, because throughout most of the text, all the text-types agree.  But where the reading of a particular text-type is adopted, that text-type is almost always the Alexandrian Text, not the Byzantine Text – and almost always the Alexandrian Text as displayed in Vaticanus, Sinaiticus, or Codex L.)
Posted by James Snapp Jr at 5:28 PM