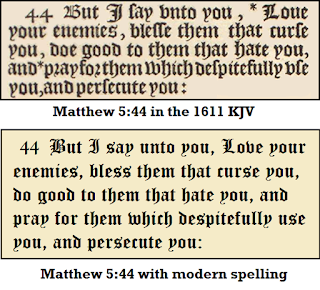 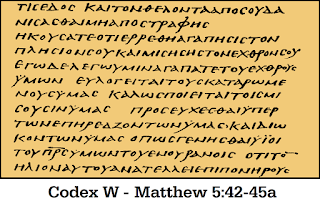 The harmonization-theory requires a strange kind of harmonizer:  one whose goal was to make the Gospel-passages agree, but who reversed the phrases from Luke 6 in the course of inserting them into Matthew 5 – thus making the word-order disagree – and who declined to add a phrase from Matthew into the text of Luke (although this could be easily done) to accomplish a fuller harmonization.
Another explanation is more credible.  In a science fiction story by the late Robert Heinlein, a character states, “You have attributed conditions to villainy that simply result from stupidity.”  Something similar should be said to the textual critics who insist on positing harmonizations and theologically motivated alterations to the text where a variation is capable of being explained as accidental.  In the case at hand, the Alexandrian reading of Mt. 5:44 can be explained as the result of a common scribal accident:  parablepsis, the skipping of text as a result of homoeoarcton (the recurrence of the same, or similar, series of letters at the beginning of words) or homoeoteleuton (the recurrence of the same, or similar, series of letters at the ends of words) or both.
If, instead of assuming that the Alexandrian reading is correct and looking for ways to defend it, one starts with the Byzantine reading and looks for ways to account for the origins of its rivals, it is not difficult to see that the phrase in the middle of Matthew 5:44 that does not appear in the Alexandrian Text could accidentally be lost via parablepsis, when a copyist’s line of sight drifted from umwn to kai, skipping the words in between.  Similarly, near the end of the verse, scribal inattentiveness accounts for the loss of the Greek phrase that means “despitefully use you and.”
An additional factor favors the Byzantine reading of Mt. 5:44.  Many researchers who study the Synoptic Problem (this is not a “problem” in the usual sense of the word; in this context it refers to the question, “What is the literary relationship between Matthew, Mark, and Luke?”) have concluded that Matthew and Luke shared a source known as Q (“Q” stands for Quelle, the German word for “source”), which consisted mostly of Jesus’ sayings, accompanied by some context-supplying narrative.  Such a document may be the “Logia,” or Sayings, which, according to Papias, Matthew prepared in Hebrew (or Aramaic).  If it is granted that Matthew and Luke each possessed a source-document in which Jesus told His disciples to love their enemies, do good to those who hate them, bless those who curse them, and pray for those who despitefully mistreat them and persecute them, then, if the Alexandrian reading of Matthew 5:44 is correct, either (a) Matthew omitted two perfectly clear and edifying phrases that were in his source-document, or (b) Luke arbitrarily expanded a perfectly clear statement in his source-document.  The adoption of the Byzantine reading of Matthew nullifies both conclusions and offers a simpler explanation of both author’s treatment of their source-material.
In this case – as is so often the case in the Gospels – the Alexandrian reading is not just shorter; the longer rival Byzantine reading accounts for its existence as an accidentally shortened reading.  And although the Alexandrian reading has early support, it is only slightly earlier than much more widespread support for the Byzantine reading.  The Byzantine reading of Matthew 5:44 should therefore be regarded as original.
Posted by James Snapp Jr at 5:12 PM