I want to focus here on the variant in the middle of the sentence, shown in bold print.  The longer reading, αυτων μνημονεύητε αυτων, looks like a combination of the two shorter readings that are listed before it; that is, this variant appears to be a conflation.
It may be helpful to view the data about this variant-unit that is found in the fourth edition of the United Bible Society’s Greek New Testament (page 384).  Setting aside minor variants, the contest is between the following rivals:

And now, the plot twist.  Contrary to the impression I have given here up to this point, this variant-unit in John 16:4 illustrates an inconsistency on the part of practitioners of “reasoned eclecticism.”  In the preceding paragraphs, I mixed up the Alexandrian and Byzantine readings.  Reverse the Byzantine and Alexandrian readings as I gave them previously, and you will see the evidence as it actually exists:

The Alexandrian variant is longer than the Byzantine variant:
Codex B (supported, according to Swanson, by 118 124 157 and 1071 and, according to 4, by P66vid À2 0233 205 Peshitta, Harklean Syriac, and the lemma of Cyril of Alexandria) reads αυτων μνημονεύητε αυτων.
Codex A agrees with B but its orthography is not so good:  αυτων μνημονεύηται αυτων.
Codex Θ concurs, but again with a spelling-variation:  αυτων μνημονεύειτε αυτων.
Codex Π is a little different, with μνημονεύσητε in the middle, but it still agrees with B by having αυτων both before and after the word.
The Byzantine variant is shorter than the Alexandrian variant:
Byz (supported by K U Ψ 1582 2c 700 Lectpt tr) reads μνημονεύητε αυτων.
Ε Γ Δ Λ 565 and 1424 concur, albeit with an itacism:  μνημονεύετε αυτων.  This is listed in 4 as a separate variant, with additional support from 1006 1241 1243 1342 Lectpt (l1016 with αυτου).
Codex 1 stands alone, with a different itacism:  μνημονεύειτε αυτων.
Codex ﬡ* likewise stands alone with an itacism (also seen in A):  μνημονεύηται αυτων.
Additional support for the Byzantine reading, according to 4:  0141  180 597 (892supp l866 with αυτου) 1010 1292 1505 ff2 Palestinian Syriac Bohpt (arm) (eth) geo slav (Chrysostom).

Before we proceed further, we ought to take a closer look at the testimony of Papyrus 66.  As you can see from this image, there is not a lot left of the lower half of the page of P66 that contains John 16:4.  Nevertheless, a calculated guess can be made about whether or not it read αυτων μνημονεύητε αυτων, αυτων μνημονεύητε, αυτων μνημονεύητε, or just μνημονεύητε when it was in pristine condition.

Here is the Alexandrian Text of John 16:2b-4, formatted to correspond to the array of letters in P66, with sacred names contracted:

Here is the Alexandrian Text of John 16:2b-4 again – this time with a slightly different array, and without the contraction of patēra:

Here is the Byzantine Text of John 16:2b-4, formatted to correspond to the array of letters in P66, with all sacred names contracted:

Here is the Byzantine Text of John 16:2b-4 again – this time with a slightly different array, and without the contraction of patēra:

Here is another configuration of the Byzantine Text, with patēra contracted:

In this array, the Byzantine Text neatly corresponds to the remains of P66 – but αυτων would fit neatly in the space after ωρα at the end of the fourth line.
All things considered, it seems probable that P66 contained αυτων both before and after μνημονεύητε when it was in pristine condition. 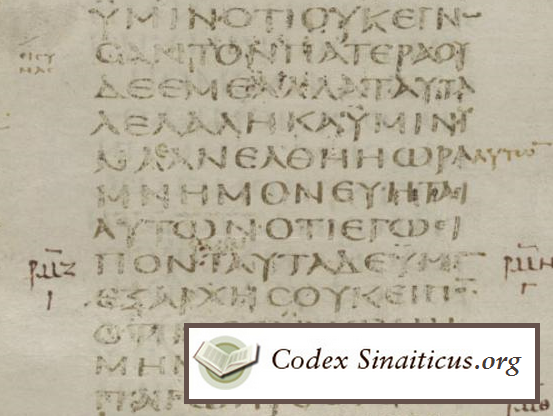 It might also be a good idea to take a closer look at Codex Sinaiticus.  No mystery here:  it initially read μνημονευηται αυτων after ωρα, thus disagreeing with Codex Vaticanus and supporting the Byzantine reading.  A later “corrector” has added αυτων in the right margin, to be read immediately after ωρα, thus creating an agreement with B.

Although this is the same kind of scenario that is confronted when Byzantine conflations are posited, I submit that in Matthew 3:12 and John 16:4, the Alexandrian Text does not display a true conflation.  (Similarly I do not grant that every Byzantine conflation identified by Hort is actually a conflation, but that’s another subject.)  Instead, it displays the effects of a scribal phenomenon in which a copyist anticipated an approaching word and wrote it twice instead of once – once where it did not belong, and once where it appeared in his exemplar.  In other words, the double-appearance of αυτων in the Alexandrian Text of John 16:4, and the double-appearance of αυτου in the Alexandrian Text of Matthew 3:12, did not originate thoughtfully, but are essentially cases of dittography.  The Alexandrian reading in John 16:4 is not necessarily a conflation, but it is a corruption.

The first English version to reflect the Alexandrian Text of John 16:4a was, as far as I can tell, Granville Penn’s The Book of the New Covenant, published in 1836:  “but these things I have told you, that when their time cometh, ye may remember that I told you of them.”
Penn did not have the resources that textual critics have today; he did not even have the resources that Westcott and Hort had when they compiled their revision in 1881.  Instead, as Penn explained in a supplemental volume, Annotations to the Book of the New Covenant, he used the text of Codex Vaticanus as the basis for his revision-work:  “I have taken the continued and entire text of the most ancient surviving manuscript, the “Codex Vaticanus” or Vatican MS., noted 1209 in the Vatican catalogue, and marked B by Wetstein; making it the basis and substance of the revision.”
As far as the text of the Gospels is concerned, Penn’s 1836 translation thus echoed Vaticanus (or, the imperfect editions of its text that were available in 1836), except where its readings seemed beyond hope of salvaging.  The compilation of Penn’s base-text was thus determined by the most non-eclectic principle imaginable; he gave Codex B a virtual monopoly of influence.
And yet, in 2015, when we examine the “reasoned eclectic” text as it currently exists, and compare it to earlier compilations used in the 1900’s as the base-texts for English translations, its degree of agreement with Penn’s base-text frequently seems to increase rather than decrease.  Consider, for example the text of John 16:4a in the NIV as it existed in 1984 (and as it was still being printed in 2002):
“I have told you this, so that when the time comes you will remember that I warned you.” (Scripture taken from the Holy Bible, New International Version ®,  Copyright © 1973, 1978, 1984 by International Bible Society.  Used by permission of Zondervan.  All rights reserved.)
The compilers of the NIV’s base-text apparently adopted the Western reading of John 16:4a.
The Contemporary English Version, likewise, seems to follow the Western reading:
“I am saying this to you now, so that when the time comes, you will remember what I have said.” (Contemporary English Version (CEV) Copyright © 1995 by American Bible Society.)
The New Century Version, likewise, conforms to the Western reading of John 16:4a:
“I have told you these things now so that when the time comes you will remember that I warned you.” (The Holy Bible, New Century Version ®, Copyright © 2005 by Thomas Nelson, Inc.)

However, in the TNIV and in the new editions of the NIV, the text of John 16:4a is different:
“I have told you this, so that when their time comes you will remember that I warned you about them.”  [Bold print added for emphasis.]  (Scripture taken from the Holy Bible, New International Version ®, NIV® Copyright © 1973, 1978, 1984, 2011 by Biblica, Inc. ®.  Used by permission.  All rights reserved worldwide.)
Thus the base-text of John 16:4 in the newly revised NIV has quietly become less eclectic than the NIV of 1984.  The New Revised Standard Version (NRSV), the English Standard Version (), and the Common English Bible (CEB) reflect the same Alexandrian base-text of John 16:4.  It would seem, from this lone example, that although more text-critical materials are available now than ever before (in the form of newly discovered manuscripts, new editions of patristic writings, etc.) “reasoned eclecticism” is producing a text that very closely resembles what Penn produced in 1836 by ignoring almost all evidence except Codex Vaticanus.  In terms of results, it is almost anti-eclectic.