On September 13, the Center for the Study of New Testament Manuscripts will celebrate its 20th year.  In honor of this occasion, let’s look at one of the manuscripts that CSNTM has brought to the public eye:  GA 1691, a Gospels-manuscript from the 1000s which resides in , at the National Library of Greece.  Page-views of GA 1691 were digitized by CSNTM personnel (as reported here) and can be viewed at the CSNTM website.  The entire manuscript is indexed, making it possible for viewers to search its pages for specific passages.

Let’s look at a single page of GA 1691 and see what it tells us about its text and how it was used.  On the page containing Matthew 7:26b-8:5a, the following features can be seen: 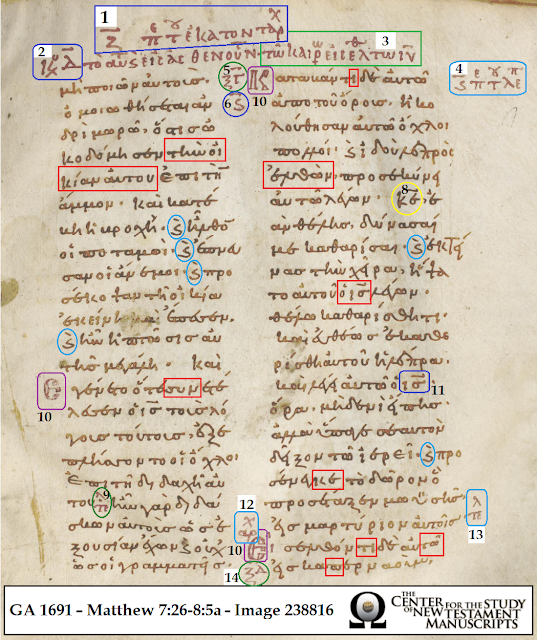 (1)  Written across the top of the page is the chapter-number and chapter-title of a chapter that begins on this page:   Seven – ζ:  pe[ri] tou ekatontarch[ou] –  About the centurion (who had someone who was sick) –

(2)    A lectionary-related note, identifying the reading for the Fourth Sunday [after Pentecost].

(3)    The lection’s incipit-phrase (At that time there came to Jesus . . . ).  This is how the lector (the person who read the Scripture-passages in church-services) would begin the reading.

(4)  The chapter-number (6, represented by ϛ) and title “About the Leper” (abbreviated)

(8)  in a yellow circle:  a sacred name contraction for “Lord” (Κυριε)

(9)  in a green circle:  a τελος (telos) symbol, indicating the end of a lection

(10)  in purple cornerless rectangles:  An initial

(12) An αρχη (archē) symbol, indicating the beginning of a lection

(13) A τελος (telos) symbol, indicating the end of a lection

And in red rectangles:  textual variants, all of which agree with the Robinson-Pierpont Byzantine Textform.

Some may call GA 1691’s text ordinary – it is one of hundreds of representatives of the dominant Greek Gospels-text used in the Middle Ages.  But those who might yawn at 1691 should take note:  the text you see on this page is much more accurate than the text of the same passage in the ancient Codex Sinaiticus, regardless of whether one uses the Nestle-Aland NTG or the Solid Rock GNT as the basis of comparison.

In commemoration of its 20th birthday, CSNTM has a special offer for those who join its Circle of Friends (more information about that here):  new registrants will receive free copies of the book Myths and Mistakes in New Testament Textual Criticism, signed by co-editor (and CSNTM research fellow) Elijah Hixson.

Excellent! I learned a lot!