Interview: Jeff Kloha of Museum of the Bible 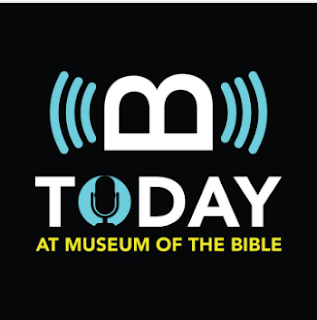 JK:  When COVID shut down the museum, we started posting the audio from the lectures over the past several years so that people had access to museum content online.  In June 2021 we started the interview format, which we now try to post weekly.

● Over the course of about 90 episodes so far, the podcast has covered a pretty eclectic mixture of Bible-related topics.  Textual critics interviewed include Elijah Hixson, Peter Gurry, and more.  About how often do you expect to feature topics relevant to New Testament textual criticism?

JK:  The theme, “Today at Museum of the Bible” reflects the wide variety of ways that people today are researching, teaching, and leading in areas related to the museum themes: the history, stories, and impact of the Bible.  The topics are eclectic because I interview people who visit them museum, or are there for a speaker series, or happen to be in . We’ve had good response at the museum to topics related to manuscripts, translation, and archeology. And the museum’s Scholars Initiative sponsors two excavations in and an imaging project at St. Catherine’s monastery at . So those topics do come up regularly in the podcast as well.

● Have you announced any new discoveries related to NT manuscripts on the podcast?

JK:  No, we haven’t announced new discoveries on the podcast. In the interviews, I try to help convey to a general audience these interesting and sometimes esoteric topics. New discoveries would be announced first in a more formal setting, but we would certainly follow up with a podcast. One topic that we did discuss in a podcast is a revised transcription of the famous “Wyman Fragment” of Romans, which Daniel Stephens will be publishing in the next issue of New Testament Studies. We’ve been able to read more lines of text and individual letters after two rounds of multi-spectral imaging, and he also discusses the results of two C-14 tests. There aren’t any revolutionary findings in the article, but it is always helpful to refine the data and be more precise in what we know about the individual manuscripts.

JK:  Many people, of course, will tell you that it has not.  There are some pretty intriguing unanswered questions. And as technology is refined and scientific testing becomes more precise, the right additional tests could answer some questions which currently do not have answers.  For example, the image on the Shroud has not been replicated at the same level of detail.  How was it produced?  Even if, somehow, it is connected to the resurrection of Jesus, how did that produce the image?  We’ve had a great response to that exhibit.  It is one of, if not the most, recognizable image of Jesus or any person from the Bible. So, people are familiar with it, familiar with the mystery of the object, and it gives an opportunity to point back to the ways that the Shroud reflects the descriptions of Jesus’ passion in the gospels.

● Is there one exhibit-item at MotB that gets more attention than all others?


JK:  You mean other than Elvis’ Bible?  Individuals resonate with different items.  But some obvious highlights are the Washington Pentateuch, the P. Bodmer XXIV (Rahlfs 2110) Psalms papyrus, the beautiful, illuminated Hours and Psalter of Elizabeth de Bohun, and on the Impact of the Bible floor, a letter written by Thomas Jefferson in 1809 and the original manuscript draft of the “Battle Hymn of the Republic.”  The breadth of the museum’s collections is impressive, and in one place you can see pretty much the entire history of the Bible, from Ancient Near Eastern backgrounds to the ongoing work of translation that is still happening today. Our collections web database features over 500 objects with images and descriptions.   [These include P39, illuminated manuscripts, GA 0250 (Codex Climaci Rescriptus) and various highlights.]

● One of your most interesting episodes (to me) was an interview with Fr. Hovsep Karapetyan, about the history of Armenian Christians.  Will he return to the podcast when MotB opens the special Armenian exhibit next year?

JK:  Fr. Hovsep and the entire Armenian community has been wonderful to work with. In addition to Fr. Hovsep we featured Dr. Christina Maranci and Dr. Jesse Arlen on topics related to the Bible and the Armenian people. I’m sure we’ll talk with Fr. Hovsep again.

● Can you tell us what to expect from that upcoming exhibit?

JK:  Armenians were the first nation to adopt Christianity as its official religion, and their beautiful alphabet was invented to create a written language for the Bible. Their liturgy, church architecture, and manuscripts are both familiar and also have a uniqueness to them. And the story of the history of Christianity among the Armenians is one of perseverance through many challenges: The Parthians, Islam, Mongols, Communism all attempted to stamp out Christian identity. And their resilience even through horrific events like the Armenian Genocide is inspiring. So, in way way, the exhibit will be a “history of the Bible” and “impact of the Bible” exhibition as expressed through the Armenian people.

● Will there be a new Armenian-exhibit-related book?

JK:  We’re hoping to produce an exhibition guide for the project.  The exhibition will not feature any new finds or research projects.  The Matenadaran has an amazing collection and a very talented staff, and they are in the process of making their resources available more broadly. I really appreciate how the Matenadaran is on the highest hill in , with the main boulevard leading up to it. It is a wonderful symbol of the centrality of the written word and the Scriptures to Armenian identity.

● When you interviewed Mark Gaither of CSNTM, he referred to four Greek manuscripts at MotB that a team from CSNTM has photographed.  Those are 0206, GA 1361, GA 2120, and Lect 2383.  Does MotB have more than those four?  What about minuscule 64?

JK:  We have not imaged that manuscript because it is in fragile condition and will need extra care and time for imaging, more than the CSNTM team had time for.  The museum has received a grant to equip its own imaging lab, so we will make and release high-res images when that equipment is up and running.

● Is there a set of complete digital page-views of GA 1429 that could be made available online?

JK:  Brian Hyland, one of our curators, has become quite expert at provenance research and tracing down tiny clues to complete a manuscript’s history. The page on our site gives a pretty detailed summary of Brian’s research, and our decision to return this manuscript to the monastery where it was used by the community prior to the terrible looting in 1917. We hope that other institutions with manuscripts from that monastery, including some in the , also return the items in their holdings.

We believe that it is the right thing to do, and we were already in discussions with the Ecumenical Patriarchate for a collaboration. We are honored to display several manuscripts on loan from the Patriarchate as well as liturgical objects that show the connection between the biblical text and liturgical practices. So, it has blossomed into a great exhibition for our guests, and the monastery will have their manuscript back again. We will be returning the manuscript physically in late September during an event at the monastery.

● How much stuff does MotB have from the Schoyen Collection?  Will it be the focus on a future podcast-episode?

JK:  We have about a dozen objects that had been in the Schoyen collection previously, including the Wyman Fragment. On our collections database you can search the term “Schoyen” and see most of them. They were released by that collection, placed on the market, and have sufficiently documented ownership history that we can hold and display them.

● Dumbarton Oaks is only about a 15-minute drive from the Museum of the Bible.  Has MotB ever kicked around the idea of working out a co-operative venture with Dumbarton Oaks, displaying the manuscripts and other antiquities that are there?

JK:  One of the great things about is the many museums, many of which have objects that are connected to the Bible and its impact. The National Gallery, of course, has a stunning collection of religious art.  The in has a fantastic manuscript collection.  And Dumbarton Oaks has a surprisingly large and deep collection of Byzantine materials, including manuscripts.  Pre-COVID I talked with them about a few potential ideas. But whether those bear fruit or not, people can still head over there and see their collection (and gardens), which is worth a visit all on its own.

● Is there any chance of ever seeing Codex W at the MotB, or highlighted it at the podcast?

JK:   The Freer Gallery, unfortunately, does not display that manuscript.  They do have a full set of high-resolution images online.  But the manuscript is apparently in fragile condition and at this point they are not comfortable displaying it, let alone loaning it.

● Is MotB able to host special events or exhibits featuring items from American manuscript-collections, like the ones at Chicago and Duke?

JK:  Most of the loans are for special exhibitions.  So, if it makes sense for the content and goals of the exhibit, we reach out to institutions for potential loans.  One challenge that many people may not be aware of: almost all museums cap the length of manuscript loans at three months.  Parchment is a very durable material, of course, but travel and changes in relative humidity can cause parchment to buckle, which then may cause ink to flake off the surface.  So, loans for manuscripts are among the most difficult.  For the permanent galleries, we prefer to rely on items from our own collections.

JK:  In the fall we will have a special exhibition on the Samaritans, and for Christmas one on the Church of the Nativity in – two very interesting topics and great exhibitions.  There will definitely be some conversations about those.  And, in January we will be opening a special “Scripture and Science” exhibition, so again that will be an ongoing topic. And we are also adding lectures featuring archeologists and researchers from the Israel Antiquities Authority—again, archeology is a popular and important topic. Beyond that, it will be pretty much whoever shows up at Museum of the Bible.

Thank you, Dr. Kloha, for sharing about Today at Museum of the Bible.