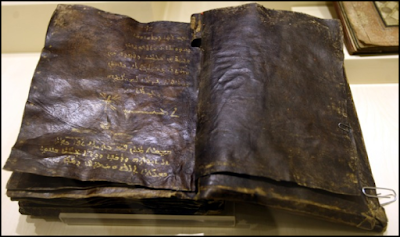 “1,500 year-old Syriac Bible found in Ankara, Turkey:  Vatican in shock!”
“Secret £14million Bible in which ‘Jesus predicts coming of Prophet Muhammad’ unearthed in Turkey”
“Jesus Foresaw Prophet Mohammad’s Arrival in Old Bible Found in Turkey.”
What’s this all about? Islamic writers are attempting to publicize a late medieval text known as the Gospel of Barnabas in order to promote their belief (based on Quran 4:157-158) that Jesus was not crucified.  (Those wishing to learn more about the so-called Gospel of Barnabas – not to be confused with the second-century composition known as the Epistle of Barnabas – can read about it at Muslim Hope, Arabic Bible Outreach Ministry, Amina Inloes’ article at Academia.edu, and UnchangingWord.  It is certainly a late medieval forgery.

A report which appeared in the British publication Daily Mail in 2016 spread the claim that the manuscript featured in such reports is a “1,500-year-old book.”  The article went on to include the same Islamic propaganda found in earlier reports, such as the sentence, “It rejects the ideas of the Holy Trinity and the Crucifixion and reveals that Jesus predicted the coming of the Prophet Muhammad.”  Setting aside the propaganda, is there anything to the claim that the manuscript in question, whatever it may contain, is 1,500 years old?
Back in February of 2012, Peter BetBasoo and Ashur Giwargis made some relevant observations about this in an article for the Assyrian International News Agency (also at the PaleoJudaica blog and at OrthoChristian.org).  BetBasoo and Giwargis noted that the inscription in one of the photographs says, b-shimmit maran paish kteewa aha ktawa al idateh d-rabbaneh d-dera illaya b-ninweh b'sheeta d-alpa w-khamshamma d-maran – that is, “In the name of our Lord, this book is written on the hands of the monks of the high monastery in , in the 1,500th year of our Lord.”  Instead of supporting the idea that this manuscript is 1,500 years old, it contains a colophon which dates its production to the year 1500.
BetBasoo and Ashur Giwargis also observed that the colophon uses a word to describe the manuscript that traditionally is not used to describe Biblical texts:  “The bottom sentence uses the word ktawa (“book”) to refer to the book, but in Assyrian the Bible is never referred to as a “book.”  One says awreta (Old Testament), khdatta (New Testament), or ktawa qaddeesha (holy book). Given this, since no one has seen the inside of this “Bible,” we cannot be sure if it is in fact a Bible.”
The Islamic propaganda masquerading as news-articles about this manuscript, calling it a “1,500-year-old Bible,” is incorrect:  if the colophon is accurate and the manuscript is not a forgery of some kind, the manuscript is only about 500 years old. 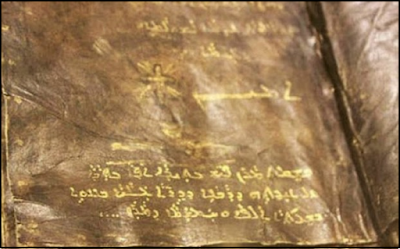 Also, Syriac specialist Dr. Peter Williams briefly chimed in on this subject at the Evangelical Textual Criticism blog in 2012.  Williams expressed his suspicion that the manuscript is a forgery; he also observed that above the colophon there is text from the closing verses of Matthew as they appear in the ordinary Syriac text of the Peshitta translation.  So there is at least a little basis for suspecting that instead of containing the Gospel of Barnabas, this manuscript – if it is not a forged or tampered document – is a damaged copy of the Syriac text of the Gospel of Matthew.

Codex Batboy is not the only item to recently receive sensationalistic claims.  An entirely different manuscript was reported to have been confiscated by police in  in 2015.  It too, received sensationalistic headlines.  I advise that if you encounter online stories about manuscripts found in  with text written in gold letters, with an abundance of claims but a paucity of evidence, set your belief-o-meter to “Extreme Skepticism.”