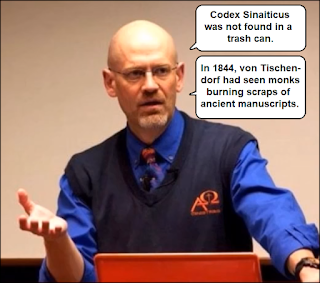 Thanks for clarifying this James. Good work!

i have noticed this myself after reading the book and hearing the quotes by da waite and others and james white saying 'they never found them in a burn basket but wrapped in red cloth' i have wondered this very thing. great post someone finally mentioned this

Thank you for this article. I would also like to point out that, concurrent to the skepticism presented about the monks' supposed treatment of the ms. in question, it is largely improbable on the surface that such a habit of book-burning existed because canons of the Orthodox Church explicitly punish such an act. For example, Canon 68 of the Trullo canons punishes anyone who destroys Scriptural texts unless they are unreadable with one years' excommunication.