Matthew 6:33 is a verse which many Christians have committed to memory.  There is a textual contest in this verse, and although it does not drastically change the meaning of the verse, the contest here has some instructive features.
Most manuscripts begin the verse with the phrase, “Seek first the and His righteousness” – Ζητεῖτε δὲ πρῶτον τὴν βασιλείαν τοῦ Θυ και τὴν δικαιοσύνην αὐτοῦ.  Besides hundreds of medieval minuscules, this group of manuscripts includes E G K L M N S U V W Δ Θ Π Σ Φ and the interesting minuscules  f1 f13 33 700 892 1263 1424 etc.
Contrary to what is stated in Willker’s Textual Commentary on the Greek Gospels, minuscule 57 has the usual Byzantine reading, albeit with βασιλείαν harshly contracted.  I consulted 157’s online page-views, but it, too, supports the usual Byzantine reading, and so does 579.

Vaticanus and Sinaiticus, however, do not have the words “of God” (τοῦ Θυ); Vaticanus also has a transposition here, so as to read “Seek first the righteousness and His kingdom” (Ζητεῖτε δὲ πρῶτον τὴν δικαιοσύνην και τὴν βασιλείαν αὐτοῦ).  (Metzger theorized that this transposition “is perhaps the result of the desire to suggest that righteousness is prerequisite to participation in the kingdom; compare 5.20,” in which case, such a scribe would seem rather reckless – but it is also possible that B’s word-order here is just an effect of a scribe losing his place, that is, the scribe’s line of sight may have jumped from the first τὴν to the second τὴν,  and then he attempted to salvage his mistake rather than remove it.)

In the 1881 revision of Westcott & Hort, the Greek words underlying “of God” were not included, and this reading is still followed in the NIV, which reads, “But seek first his kingdom and his righteousness” (applying “his” (αὐτοῦ) to both of the preceding nouns); the RSV read the same way.   The ESV and CSB, however, reject the readings of both B and À.  The NLT, though rendered somewhat imprecisely, also favors the Byzantine reading:  “Seek the above all else, and live righteously.”   In addition, the Tyndale House edition of the Greek New Testament (2017) includes τοῦ θεοῦ in its text, thus supporting the Byzantine reading.
When we turn to early versions, there is widespread support for the Byzantine reading:  the UBS apparatus (2nd ed.) lists most Old Latin copies, the Vulgate, the Sinaitic Syriac, the Curetonian Syriac, the Peshitta, the Harklean Syriac, the Palestinian Aramaic, the Armenian version, and the earliest Georgian copies as allies of the Byzantine text at this point.  (Codex Argenteus, containing most of the Gospels in Gothic, is unfortunately not extant for Matthew 6:33.)
. 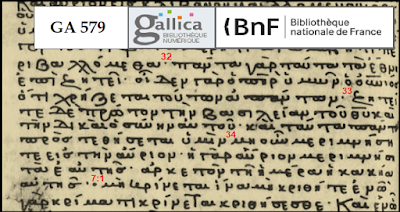 Thus, where there is a contest in the Synoptic Gospels between variants that refer to the of , or to the kingdom of heaven, a strong scribal tendency is shown toward replacing the phrase “” with the phrase “kingdom of heaven.”   This tendency may be the result of natural harmonization toward Matthew, but this cannot be the case in the three examples taken from Matthew, or in the passages which have no Matthean parallel.

With this scribal tendency in mind, let’s consider the other horses that are running in this race.  John Chrysostom, though he repeatedly used Matthew 6:33 in its usual form, once uses the phrase, “Seek first the kingdom of heaven and his righteousness.”  Clement of (who died around AD 215) stated in the course of Paedagogos (The Instructor) II 120:2, “But you also oppose Scripture, seeing it expressly cries, Seek first the kingdom of heaven, and all these things shall be added unto you.”  Initially, this looks more like a loose recollection of Luke 12:31 than a quotation of Matthew 6:33.  But in Stromateis (Miscellanies) IV 34:6, in the course of offering a series of passages on the theme of avoiding anxiety and relying on God, Clement states:  “”Wherefore I say, take no thought for your life, what you shall eat, neither for your body, what you shall put on.  For your life is more than food, and your body more than clothing.”  And again, “For your Father knows that you need all these things.  But seek first the kingdom of heaven, and its righteousness,” for these are the great things, and the things which are small and pertain to this life “shall be added to you.””
(Some readers may be interested to know that the last part of Clement’s statement, and another statement of Clement in Stromateis I, chapter 24, appear to constitute a utilization of a statement which circulated in the early church as a saying attributed to Jesus:  “Seek what is great, and the little things shall be added.”  Though not preserved in any of the canonical Gospels, this saying (or “agraphon”) was used not only by Clement but also by Eusebius of Caesarea.)
Earlier yet, Justin Martyr, in First Apology 15:16 (c. 160), writes, “Take no thought, therefore, as to what you shall eat, or what you shall put on, for your heavenly Father knows that you need those things.  But seek the kingdom of heaven, and all these things shall be added unto you.”  This resembles Luke 12:31 more closely than it resembles Matthew 6:33, but the parallel is inexact due to the reference to the kingdom of heaven.
If we consult Ephrem Syrus’ Commentary on the Diatessaron, we may find some data that helps explain the origin of Justin’s and Clement’s form of the verse.  Writing in the mid-300s, Ephrem offered comments on substantial parts of Tatian’s Diatessaron, a composition which Tatian put together in about the year 172, blending the contents of the four Gospels into one continuous account.  Tatian was a student of Justin, who appears to have used a similarly blended-together composition that combined the texts of Matthew, Mark, and Luke.
This would interlock with the idea that Justin (or whoever made his harmonized narrative that blended together Matthew, Mark, and Luke) – and subsequently Tatian, building on his teacher’s materials – without feeling obligated to maintain the meticulousness that a copyist might feel when making a copy of an individual Gospel, took some minor liberties with the text, resulting in a statement in the Diatessaron, based on Matthew 6:33 and Luke 12:31, which reads, “Seek the kingdom of heaven, and all these things, over and above, shall be added to you as well.”  According to Willker (citing Carmel McCarthy’s translation of the text of Ephrem’s commentary on the Diatessaron), Ephrem Syrus utilized just such a statement in his commentary.

When we consider the widespread influence of the Diatessaron, and the scribal tendency to replace “kingdom of God” with “kingdom of heaven,” an explanation for the readings in Matthew 6:33 in the Alexandrian codices presents itself:  in an early manuscript, the text was altered so as to read, “Seek first the kingdom of heaven and his righteousness” – the only difference being the replacement of “of God” with “of heaven” – precisely the sort of change that we see (with problematic frequency) not only in minuscule 579, but in much earlier witnesses such as the Sinaitic Syriac.
Subsequent copyists considered this reading intolerably puzzling, and removed “of heaven,” leaving only “the kingdom,” yielding the reading in À.  This scribal modus operandi is basically the same one observed in Papyrus 75 in Luke 12:31, where – whether one regards “His kingdom” or “the ” as original – nothing is left but “the kingdom.”
In conclusion, we have good reasons to be confident that the Byzantine reading of Matthew 6:33 is original.

Readers are invited to explore the embedded links for additional resources.

Thank you James. This was well stated and researched. I have long theorized that the Wescottian dictum "lexio brevior" was employed by 3rd and 4th century scribes/copyists to bring the NT text into more formal conformity. Albeit Matthew 6:33 presumes either "kingdom [of heaven]" or "kingdom [of God]" by inference it is nonetheless critical for us to have a thorough grasp of such textual tendencies. All NT manuscripts are by providence the Word of God.