The Nestle-Aland Text in Galatians 1: Alexandrian or Eclectic?

It is sometimes claimed that the text in the Nestle-Aland Novum Testamentum Graece and the United Bible Societies’ Greek New Testament was compiled via a process that rejects the contents of over 90% of the existing manuscripts of the New Testament, strongly preferring the contents of two manuscripts:  Vaticanus (B, 03) and Sinaiticus (À, 01).  Is that true?  Let’s find out – or at least, let’s use a sample to get some idea about how accurate that claim is – by comparing the text of the first chapter of Galatians in the 27th edition of the Nestle-Aland Novum Testamentum Graece to the text in Codex Vaticanus, the text in Codex Sinaiticus, and to the Byzantine Text.  (In Galatians, the text in the 28th edition of the Nestle-Aland compilation is the same as the 26th and 27th edition, going back to 1979; the same text is in the fourth and fifth editions of the  Greek New Testament.)  In Matthew-Jude, the Byzantine Text usually represents the contents of the vast majority of Greek manuscripts.

In Galatians chapter 1, there are only nine differences between the  Nestle-Aland compilation and the Byzantine Text, and in three of those cases, the text in NA27 is bracketed, indicating that the NA compilation is unstable at those three points.  Here are the differences: 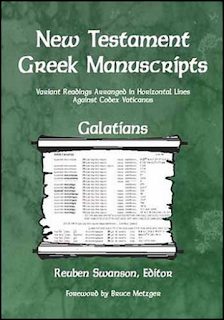 Another comparison may be considered.  Using the late scholar Reuben Swanson’s volume of line-by-line comparisons of the contents of various manuscripts, let’s investigate line-by-line to see whether the NA compilation looks like it depends heavily upon B and ﬡ, or if it looks like an eclectic text, in terms of its results.

The result:  out of 44 lines of text in Galatians in Swanson, 35 lines match the text of B without variation.  Out of the remaining nine lines, which in NA do not agree with B, five of them agree with À.  So when one reads Galatians 1 in the Nestle-Aland compilation, one is reading a text that is in either B or ﬡ roughly 91% of the time, if one divides the text into the comparison-lines in Swanson.

So: in Galatians 1, if we divide the text into Swanson’s 44 lines (as a convenient reference):  35 lines agree with B.  Five of the 9 remaining lines that do not agree with B, agree with ﬡ.  Three of the four remaining lines that do not agree with B, nor with À, agree with Byz.  Thus, in Galatians 1, in terms of how many full lines in Swanson’s comparison agree with either B, À, or both, the Nestle-Aland compilation is roughly 91% Alexandrian, 7% Byzantine, and 2% something else.
If we zoom in for a closer look at those three lines in which NA agrees with Byz against B and ﬡ, we see how small the impact of the Byzantine Text is:
(1) The difference at the beginning of verse 8 amounts to καν (in B) versus και εαν, which is read by ﬡ as well as by Byz.
(2) The contest near the end of verse 8 is between the absence (in B and ﬡ) or presence (in Byz) of υμιν.  Inasmuch as the word is bracketed in NA27, this should not be considered a stable portion of the NA compilation. And,
(3) The difference near the beginning of verse 19 is a matter of two letters in two words.  Treated as separate variants, each word adopted in NA is supported by either B or ﬡ:   B has ειδον and ﬡ has ουκ.


Thus, one can produce a compilation of Galatians 1 that is identical to the text of NA by picking and choosing exclusively from first-hand readings in B and ﬡ, with one exception:  the Byzantine Text has contributed one bracketed word (consisting of four letters) in verse 8.  (B also has υμιν, but before ευαγγελίζηται instead of after it.)   It seems to me that the presence of a single word (constituting a little less than one-third of one percent of the text of Galatians 1) does not justify calling the NA compilation of Galatians 1 an eclectic text.  Whatever has been said about the eclecticism of the method used to compile the Nestle-Aland text, the compilation itself in Galatians 1 is more than 99% Alexandrian.
Posted by James Snapp Jr at 9:39 PM