The Third-most-important Manuscript in the Vatican Library

At the Vatican Library, a project is underway to digitize thousands of Greek manuscripts.  The most important Biblical manuscript at the Vatican Libary – Codex Vaticanus (B, 03), an incomplete uncial manuscript produced around 325 – is already online.  Papyrus 75 is also at the Vatican Library (although complete page-views are not yet available at the Vatican Library’s website).  The third-most important Greek manuscript housed at the Vatican Library is also online:   minuscule 157, listed in the library-catalog as MS Urbinate Gr. 2.  Let’s take a look at this very important Gospels-codex.
Codex 157 is a minuscule copy of the Gospels that was produced, according to a secondary note in the manuscript, in 1122.  Even if this note had not been included in the manuscript, an approximate production-date could be deduced from the full-page illustration that appears before the Gospels-text:  Jesus Christ is pictured on His heavenly throne, accompanied by personifications of mercy and righteousness, with one hand on Emperor John II Comnenus (b. 1087, r. 1118-1143) and the other hand on Alexius, the son of John II Comnenus.   It is similar to a mosaic of Byzantine Emperor John Comnenus II and Empress Irene (previously a Hungarian princess) in Hagia Sophia (in Istanbul); the inscription that accompanies John Comnenus II in the illustration in minuscule 157 is the same as the one that accompanies him in the mosaic in Hagia Sophia.
In 1912-1913, in the Journal of Theological Studies, the researcher H. C. Hoskier released a full collation of 157 which is available at Archive.org.  Hoskier took note of the interesting text of this manuscript, particularly in the Gospel of Luke and the Gospel of John.  He also reported some of its history:  for some time it was housed at Urbino (the birthplace of the artist Raphael) in Italy, and eventually came into the possession of Clement VII (1523-1534).  It has been in the Vatican Library since that time.  Reuben Swanson cited 157 exhaustively in the Gospels-volumes of his Greek New Testament Manuscripts book-series.
In this manuscript, the portraits of the evangelists are combined with elaborate headpieces, heavily embellished with gold, that precede the beginning of each Gospel.  Each Gospel is accompanied by a full-page illustration closely resembling an icon:  Christ’s birth, Christ’s baptism, the birth of John the Baptist, and Christ’s resurrection are all depicted.
Marginalia is plentiful:  chapter-numbers and chapter-titles are provided at the tops of pages, and chapter-numbers also appear in the side-margins.  Section-numbers (but not canon-numbers) are in the side-margins.  The names of various feast-days and some calendar-days also accompany the passage assigned to them in the lectionary.  In addition, the text is peppered with gold dots, apparently intended to indicate where one should pause when reading aloud.
While the artistic and calligraphical skills displayed in 157 are impressive, its chief value emanates from its text.  Hoskier noted that while 157 frequently corresponds to the Textus Receptus for large segments (sometimes for over 30 verses), it has a strong non-Byzantine element as well.  Hoskier listed hundreds of non-standard readings in 157, and noted many particularly interesting ones, including variants in Matthew 21:46, Mark 5:23, Luke 5:18, and John 12:20.  At the end of Mark, verses 9-20 are present – verse 9 begins on the same line in which verse 8 ends.  The story of the adulteress (John 7:53-8:11) is completely absent; John 8:12 follows 7:52 with no gap.  The copyist was a careful worker but nevertheless he made occasional mistakes, perhaps the worst of which is in John 14:6, where he omitted the clause, “and the truth.”  This mistake was never corrected, which suggests that 157 did not receive a lot of regular use. 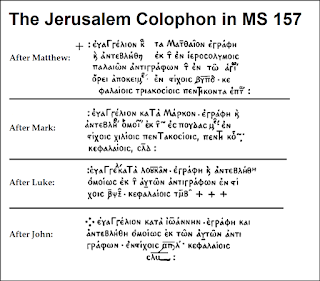 At the end of the Gospel of Matthew, 157 features the intriguing note known as the Jerusalem Colophon:  “The Gospel according to Matthew:  written and double-checked using the old copies in Jerusalem, stored on the holy mountain.”  This is blended with a note about the amount of text written by the copyist:  “2,484 sense-lines and three hundred and fifty-seven chapters.”  Colophons which follow the conclusions of Mark, Luke, and John also state that their text has been written and double-checked using the same copies – the “ancient copies at Jerusalem” mentioned in the colophon after the end of the Gospel of Matthew – before listing the number of sense-lines and chapters (or, technically, sections) in each Gospel.
Minuscule 157 is thus a member of an elite group of 37 manuscripts that contain this note, or similar notes.  Among the fellow-members of the group of manuscripts that contain the Jerusalem Colophon (in one form or another) are 039, 20, 164, 215, 300, 376, 565 (an important manuscript written on purple parchment), 686, 748, 829, 899, and 1071.  The relationship of these manuscripts to one another is not yet resolved, but it seems sufficiently clear that when a consensus of the members of this group is in agreement, it bear witness to a transmission-line that is more ancient and weightier than any single member of the group.  It may be worth mentioning that several members of this group share a similar note about John 7:53-8:11.  (See, for details, the excursus in Tommy Wasserman’s 2009 essay, The Greek New Testament Manuscripts in Sweden with an Excursus on the Jerusalem Colophon.)
In the event that readers may wish to consult images of 157 directly, I have prepared the following index.  Verse-references indicate the passage where the first line of the page on the left is found.  (Please bear in mind that the digital images at the Vatican Library are under copyright.)

PREFATORY MATERIAL
Front Cover.
Latin text of Jerome’s Letter to Damasus (probably included as an explanation of the Eusebian Canons.)
Beginning of Ad Carpianus (within a quatrefoil border).
End of Ad Carpianus (cruciform) and first Canon-table.
Final Canon-table and beginning of chapter-list for Matthew:
12v/13r:  Kephalaia (chapter-list) for Matthew.
13v/14r:  End of kephalaia for Matthew.  Beginning of Chronikon, by Eusebius of Caesarea, written in red.
14v/15r:  End of Eusebius’ Chronicon; beginning of Hippolytus of Thebes’ Chronicle, extracted from Book 3 of his writings.
15v/16r:  End of the extract from Hippolytus of .  Beginning of extracts from John Chrysostom’s Preface to the Gospel of Matthew (First Homily on Matthew).
16v/17r:
Continuation of the extracts from John Chrysostom’s First Homily on the Gospel according to Matthew.
17v/18r:  Further extract from Chrysostom’s First Homily on Matthew.  (“For this reason, then, Matthew, writing to Hebrews, sought to show nothing more than that Jesus was from Abraham and David. . . .”).  Additional comment on the four Gospels, extracted from Origen, followed by a list of Greek rhetoricians and other writers, closing with a reference to Paul of Tarsus.
18v/19r:  Epigrams of the Gospel of Matthew, and an extract from Nicetas (?).
19v:  Gold-background picture:  Christ Blessing John II Comnenus and Prince Alexius.
20v:  Pasted-down full-page icon-page:  the birth of Christ.  Combined scenes:  heavenly saints and angels look down upon Mary and the Christ-child; Shepherds visit; adoration of the magi.  Ox and donkey are peeking over the manger.  Mary is seated on a white couch with red and blue stripes.  Below:  a fourth scene – Joseph looks at two sheep while the midwives Salome and Zelemi bathe the Christ-child.

May this manuscript, prepared for the family of the Byzantine Emperor (perhaps on the beginning of Alexius’ reign as co-emperor), continue to bless the kingdom of God.
Posted by James Snapp Jr at 3:09 AM