Video Lecture: How Manuscripts Were Made 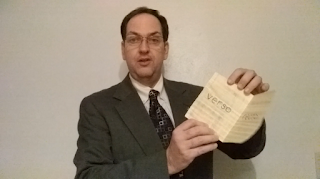 Lecture 03 in the series Introduction to New Testament Textual Criticism is now online:The Structure of New Testament Manuscripts And How They Were MadeIn this brief lecture, I describe what a leaf is, what a quire is, Gregory's Rule, cancel-sheets, multi-quire codices, ruling, catchwords, correctors, trimming, binding, palimpsests, and more.

https://www.youtube.com/watch?v=N5iIyVE39Qg
Here is an excerpt:

Today, we will take a closer look at how a codex was made, once the papyrus or parchment or paper had been provided.

One sheet of parchment = a bifolium, a sheet folded vertically in the middle.

When we are dealing with a single fragment of a single text that can be identified, the part of the text that comes first in the composition is regarded as the recto.

A gathering = several sheets stacked upon each other, and folded vertically down the middle.

Sometimes a gathering is made from a stack of three sheets, and this is called a ternion.

Sometimes a gathering is made from a stack of five sheets, and this is called a quinion.

But usually a gathering is made of four sheets, called a quaternion, for a total of 16 pages.  This kind of gathering is the standard quire.  (Q-u-i-r-e.)

You could say that if a man in ancient times wanted to obtain four folded sheets of parchment to make a 16-page booklet for a group of singers at the cathedral, he wanted to acquire a quire for a choir.

Some early codices had quires made of much more than four sheets.  A codex can be made with only one quire, folded in the middle.  Such a codex is, understandably, called a single-quire codex.  This kind of book has two disadvantages:  the more pages are folded together, the more “creep” there is – the part that sticks out in the middle-pages past the edge of the lowest and uppermost page when the quire is folded.  Also, the thicker a single-quire codex is, the harder it is to keep it closed, and to make its pages lay flat.

This custom, which could be summed up as, “Hair faces hair, flesh faces flesh,” is called “Gregory’s Rule,” because it was first detected by C. R. Gregory.  Papyrus is a plant and thus papyrus-pages have neither hair nor flesh, but papyrus sheets in a codex tended to be arranged using the same principle, so that the smoother side of each folio faced the smooth side of the next folio, and the rougher sides of the folios faced each other.

To avoid the problems that arose with single-quire codices, the Multi-Quire Codex was invented:  instead of beginning as one stack of sheets, the book began as two or more stacks of sheets, folded in the middle.  These booklets, each consisting of one quire, were then sewn to each other to form a book, which was usually given a protective binding or cover of some sort.  In some case, the book was kept in a special leather pouch or satchel.

The multi-quire codex had some advantages over scrolls.  For example:  when reading a codex, it is much easier to page through a codex of the Gospels and  compare parallel-passages, than with a scroll.  Also, if one folio of a codex is damaged, it can be removed and replaced.  Scrolls can be repaired too, but it’s more trouble.

When making a codex, if the main copyist were to make a mistake so bad that it ruined the entire page, the proof-reader, or whoever noticed the mistake, could remove the individual sheet, and replace it with one in which the mistake had been corrected.  This meant replacing not only the text on the page where the mistake had appeared, but also the text on the other folio on the sheet – four pages of text in all.  Such a replacement-page is called a cancel-sheet.

Before a copyist wrote the text on a page, the page first had to be ruled – that is, the page need to be marked with lines for the copyist to follow.  Some codices have the text arranged in just one column on each page; some codices have the text in two columns.  Codex Vaticanus is almost unique by having the text formatted in three columns on most pages, although in its Old Testament portion, in the Books of Poetry, the format is two columns per page.  If a manuscript was intended to feature commentary-material in the margins, this usually had to be anticipated and the page-format had to be adjusted accordingly.

Some manuscripts appear to have been prepared quire by quire before the quires were sewn together.  Quires were typically numbered.  It was not unusual, at the end of a quire, for the copyist write the first word of the next quire.  These are called “catchwords,” and along with the quire-numbers, they helped the person who assembled the book – and people who later repaired the book – avoid getting the quires in the wrong order.  But sometimes the quires got mixed up anyway.

Embellished letters were often written in different ink – red, or golden – after the main text was written.  If there were illustrations, some space had to be left for them.  In some manuscripts, the space has been left for illustrations, but the illustrator

Another thing to consider, when we look at what went into the production of a manuscript, is that we are not always looking at the result of a single production-event.  Some manuscripts were made by more than one copyist, and the larger a manuscript is, the more likely this is to be the case.

Sometimes, the text of a manuscript was adjusted to conform to a different exemplar.  In cases where this was attempted, the person who made the adjustments is called a “corrector,” whether or not he was indeed making the text in the copy more like the original text.  A corrector might work on a manuscript before it left the scriptorium, or hundreds of years later.

A manuscript might be damaged, and also be repaired, long after its initial production.  A manuscript might be supplemented with lectionary-related material long after it was first made.  And sometimes, if the script that had been initially written on the page had faded, a later copyist might trace over, or “reinforce,” the old lettering.  So we need to be on the lookout for indications of changes that a manuscript has undergone after it was made.

This can involve not only alterations to the text, but also physical changes to the book.  Books and their binding were occasionally damaged, whether by fire or water or simple wear-and-tear, and they needed to be repaired.  Sometimes, the pages were re-trimmed, and in some cases,  the person doing the trimming was careless, and trimmed away not only some material in the outer margins, but also lines of text.

But being turned into binding-padding is not the most drastic post-production change that could happen to a manuscript.  Some manuscripts were recycled.   There were times and places where parchment was scarce or expensive or both, and if a copyist possessed a parchment book that he did not consider valuable, he might dismantle it, and wash or scrape the ink off of its pages, in order to obtain its parchment.  Why would anyone recycle a New Testament manuscript?

(1) The manuscript might be written in an unfamiliar language.  A Latin-speaking copyist might not see a Greek manuscript of the Gospels as valuable if he did not read Greek.

(3)  The manuscript might have been damaged.  A copyist might possess a manuscript that has been damaged beyond repair, but still have some intact pages which could be re-used.  Why throw away valuable parchment when it can be made into useful parchment by scraping off the ink?

For whatever reason, copyists recycled quite a few manuscripts of books of the New Testament, washing and scraping off the ink, which rendered the parchment blank so that it could be re-using as material to hold a different text.  At least, it looked blank for a while – but in the course of time, the ink that had bonded to the parchment became perceptible again.  Because the parchment of these manuscripts have been scraped twice – once in the initial production, and again when they were recycled – they are called palimpsests, from the Greek words for “scraped again.”

For details about a specific single-quire codex, visit the ’s website that describes the structure of P46.  Just search for University of Michigan Papyrus 46 Codex.  All of the pages about P46 there are worth exploring.

For some additional general information about the structure of a codex, watch the video, 2 minutes and 8 second long, The Structure of a Medieval Manuscript, made available at YouTube by the .

For information about ruling a page – arranging the lines and margins – watch the video, Making Manuscripts:  The Page, one minute and 40 second long, made available at YouTube by the British Library.

And, finally, for more information about what can be done with Multi-Spectral Imaging, watch the video, 5 minutes and 16 seconds long, Codex Zacynthius MS Add. 10062, Recovering the Text of the Oldest New Testament Catena Manuscript, made available at YouTube by the Cambridge University Library.