Word of the Day: Apotropaic 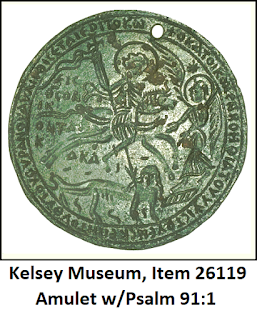 Word of the Day:  Apotropaic (adjective):  designed to turn away evil.

In the days of the , it was not unusual for pagans to create little charms, marketed with the claim that the people who wore them would be protected from disease.  Sometimes these charms had brief inscriptions, asking one of the Greek or Roman deities for their protection.  And sometimes, such inscriptions were written on papyrus or parchment and folded and/or rolled up into a wearable form, such as a bead, necklace, or bracelet.
Among the Dead Sea Scrolls, there is one, 11Q11 (produced in about A.D. 50), that features several charm-inscriptions, and a loosely adapted form of Psalm 91.  This scroll might have been a master-copy used by someone making apotropaic amulets.
The inspired author of Psalm 91 begins with an expression of confidence in the Lord’s protection, relying on God’s help in the face of danger:  “He who dwells in the shelter of the Most High shall abide under the shadow of the Almighty.”  I will say of the LORD, “He is my refuge and my fortress; My God, in Him I will trust.”
In the verses that follow, we see an appeal for divine protection:  “Surely He shall deliver you from the snare of the fowler, and from the deadly pestilence,” and “No evil shall befall you, nor shall any plague come near your dwelling.”
It is no wonder that hundreds of years later, many early Christians found comfort in this psalm.  At ’s Special Collections Library, there is a papyrus (P. Duk. Inv. 778) that has the Lord’s Prayer (Matthew 6:9-13) on one side, and Psalm 91 on the other side.   (I offered an analysis of the text of Matthew 6:9-20 in 2015 in this post.)  At the , there is a small amulet (see the “Words of Salvation” in this post) that contains just a snippet from the beginning of Psalm 91.  The , in , has a metal armband with an inscription based on Psalm 91:1.
Other Scripture-passages that were used in amulets and apotropaic inscriptions included Romans 8:31b – “If God is for us, who can be against us?” – and the opening verses of the Gospels.  Why the opening verses?  Perhaps there was a superstition that if an inscription just had the first part of each Gospel, that would be enough to invest the whole inscribed object with protective power.  Whatever the reasoning was, excerpts from the opening verses of one or more Gospel have been preserved in several ancient amulets, and on the walls of a crypt in Dongola in Sudan (excavated in 2009).
This may raise a theological question:  are such amulets and inscriptions a good thing, or a bad thing?  If danger approaches, and then retreats, will a person wearing an amulet give thanks to God, or will he say, “Whew; it’s a good thing I was wearing that amulet!”?  Will owning a plaque of Psalm 91:1 or Romans 8:31 protect you from COVID-19?  Can such an object become an idol if a believer thinks he is especially protected from harm because of it?
My answer has two parts:  first, fellow believers facing the danger of COVID-19 should find comfort and confidence in God’s promises.  I encourage you to keep God’s promises and commandments in view, like Deuteronomy 6:9 says:  tie them to your hands and write them on the doorposts of your house.  Visible reminders of God’s promises are a blessing.
Second, remember that when the devil tempted Jesus, the devil quoted Psalm 91 – and we ought to take that as a lesson that even good things (such as Scripture itself) can be misused for a destructive purpose.  Jesus’ answer to the devil’s temptation was to refuse to put Himself at risk when it was not the Father’s will.  Instead, He answered, “It is written again, ‘You shall not tempt the Lord your God.’”  God’s promises were not given as a license for anyone to do things against the Father’s will, and it is not the Father’s will for us to engage in activities that involve taking needless risks – actions that are simply irresponsible, unwise, and reckless.  Our God, who gave promises to His people, works through His people to fulfill many of His promises.  When we act responsibly, patiently, soberly, and in obedience to God, we are God’s co-workers doing our part to fulfill His purposes and plans.
God does not want His people to imagine that a virus is greater than Him.  Nor does God want His people, if they face a temptation to needlessly put themselves in harm’s way, to say, “Fine, Satan, I’ll jump off the temple; Geronimo!”  We ought to use wisdom and caution – which, in the present situation, for most of us means staying at least six feet away from other people, avoiding crowds, and frequently, thoroughly washing our hands.
And when danger has passed, give no thanks to amulets and inscriptions that human hands have made.  Give thanks to God for the gifts He has given – greatest of which is eternal life through His Son, who gives us peace that, unlike viruses, will not pass away.

For more information about New Testament materials in amulet-form, see this research by Deniz Sever and this article by Joseph Sanzo.

Readers are invited to double-check the data in this post.  And wash your hands!