John Barton and the Text of the New Testament 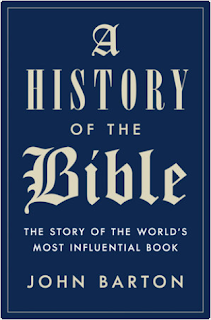 What does John Barton say about New Testament textual criticism, and related subjects, in his new book, A History of the Bible –The Story of the World’s Most Influential Book?  Those who take this volume in hand will require some time to find out:  it is 489 pages long (not counting the extra sections that contain Notes, Further Reading, a bibliography, and indices), and covers the Old Testament as well as the New Testament, and several chapters are devoted to the treatment of the Biblical text in the Middle Ages and later.
The path to information relevant to New Testament textual criticism in Barton’s book will take readers through a veritable zoo of theological liberalism.  On the very first page Barton asserts that the Bible is rooted in “folklore and myth.”  In what follows, readers are told:
● In Christianity, “there are absolutely central doctrines, such as that of the Trinity, that are almost entirely absent from the New Testament.” (p. 3)
● Moses did not have The Ten Commandments (pages 78-79).
● “A rough consensus has arisen among specialists that biblical books are unlikely to go back much before the ninth or tenth century.” (page 32)
● The story of the repentance of king Manasseh was invented. (page 56)
● Ruth, Jonah, and Esther are “probably fictitious,” (page 56) along with the stories in Daniel 1-6.
● Out of the 66 chapters in the book of Isaiah, only chapters 1-8 and 28-31 contain the work of Isaiah. (page 102)  Chapters 24-27 “could be as late as the third century or even the second century BCE.” (page 103)
● The book of Acts is “not necessarily by the same author as Luke” (page 162).
● The Didache is “at the latest from the very early second century, and so probably earlier than at least some of the New Testament books.” (page 162)
● “Paul’s letters, and the other letters in the New Testament, are to be seen as actual letters rather than as inspired Scripture.” (page 413)
● Paul’s statement in Romans 5:12 that death entered the world because of sin is “clearly untrue.” (page 428)
You get the idea:  Barton is a liberal, and his liberalism glows on every page of this book like radiation from a nuclear bomb-site.  Practically from cover to cover, Barton rejects basic beliefs of Christianity.  If you have sought for a volume that could be validly sub-titled, “How Liberals Reject the Gospel,” your search is over.  But that doesn’t mean that the author is not erudite.  John Barton was educated at , and taught at for several decades.  He was joint editor of the Journal of Theological Studies from 2004-2010.
What, then, can we learn from John Barton regarding New Testament textual criticism and the materials most relevant to the enterprise of reconstructing the original text of the New Testament?  We learn in chapter 12 that “Earlier attempts to establish ‘the original text’ of any book have now largely been set aside.” (page 286)  And we are told, “There is not, and never can be, a text of ‘the New Testament’ as it left the hands of Paul Luke or John:  we have only variants.” (page 286)  This may be the wishful thinking of Barton’s fellow-liberals, but it is not the view of most evangelical researchers in the field.  Don’t expect the existence of evangelical or conservative scholarship to be acknowledged in this book.

What else can we learn?  We learn the following:

(1)  Papyrus 73 contains “large sections of Luke and John.” (page 286)
(2)  Codex Bezae contains “not only the New Testament but also the Old Testament in Greek”  (page 288)  but – on the same page – Codex Bezae “contains the Gospels and Acts,” but – on page 444 – Codex Bezae is “a fifth-century manuscript of the whole Bible in Greek and Latin.”
(3)  “There are 196 extant uncial codices.” (page 288)
(4)  When editors of modern printed Greek New Testament prepare critical texts, “This is often mainly a matter of intuition.” (page 290)
(5)  “People in the early Church usually believed that Jesus was, like God himself, omniscient.” (page 292)
(6)  “Many papyri” support the non-inclusion of John 7:53-8:11.  (page 294)
(7)  The story of the adulteress “is present only in very few manuscripts.” (page 294)
(8)  “There is an eleventh-century Gospel manuscript (1,333) that places it [i.e., the story of the adulteress] at the end of Luke.” (page 294)
(9)  “The Peshitta Old Testament was probably translated directly from the Hebrew, and the New Testament from the Greek, in the second century.” (page 305)
(10)  Regarding the Comma Johanneum, “We would now probably think of it as coming from the early second century CE.” (page 407)
(11)  “There are several thousand New Testament manuscripts from the first few centuries CE.” (page 285)
(12)  In the world in which lectionaries were made, page-numbers did not exist.  (page 289)
All of these statements from John Barton’s book are incorrect or hopelessly garbled.  In real life:
(1)  Papyrus 73 is a small fragment that contains text from Matthew 25 and 26; it has no text at all from Luke and John.  Barton probably meant to refer to P75.
(2)  Codex Bezae is a damaged codex which contains most of the Gospels and Acts, and a page with text from Third John.  It is certainly not a copy of the whole Bible.  Even a beginner in the field of New Testament textual criticism should know this as naturally as he recognizes his home-country on a map.
(3)  There are over 300 extant uncial codices, although many of them are very fragmentary.  Barton’s claim of 196 indicates that he has been working with some very obsolete data, which the most basic online search would remedy.  A complete beginner relying on Wikipedia could do better.
(4)  Editors of critical texts do not mainly rely on intuition; Barton’s claim is absurd and backwards.  Editors apply scientific guidelines, or canons, to the evidence, and only in remarkably close contests is intuition – or, one might say, experienced instincts – employed.
(5)  The claim that early Christians believed that Jesus knew everything cannot survive a plain reading of Mark 13:32.
(6)  The UBS textual apparatus’ entry for John 7:53-8:11 lists exactly two papyri as witnesses for the non-inclusion of this passage:  Papyrus 66 and Papyrus 75.  This is not “many papyri.”
(7)  Barton’s claim that the story of the adulteress is “present only in very few manuscripts” is hilarious in light of the presence of the passage in over 1,400 manuscripts.  The estimate that the story of the adulteress is present in about 1,500 Greek manuscripts, and absent in about 300 Greek manuscripts, is not far off.  One can only wonder how many of Barton’s students at have absorbed his fiction and spread it to their congregations.
(8)  Minuscule 1333 has John 8:3-11 (not 7:53-8:11) inserted after the end of Luke, but contrary to the impression given by Barton, it is neither presented as part of the Gospel of Luke nor as a “floating” anecdote.  As I have shown, the passage was inserted so that minuscule 1333 would include the lection for Saint Pelagia’s Day (Sept. 8), and before the text of John 8:3 begins, there is an ordinary lection-title, “ek tou kata Iw.,” that is, “from the [Gospel] of John.”
(9)  The Peshitta, which initially included only 22 books of the New Testament – Second Peter, Second and Third John, Jude, and Revelation were excluded – was not produced in the 100s.   For well over a century, most Syriac specialists have viewed the Peshitta as a form of the text that did not clearly emerge until the late 300s or 400s.
(10)  Barton is free to suppose that the Johannine Comma existed in the early 100s, but that is a fantastically unrealistic view.  Its earliest attestation in Latin is from the late 300s (in an inexact form); as a Greek reading it is practically non-existent until the late Middle Ages when it was retro-translated from Latin and inserted, with variations, in a few Greek manuscripts.  (Regarding the claim that the Johannine Comma was cited by Cyprian in the mid-200s, see this post.)  Furthermore, Barton has misquoted the text:  he states that First John 5:7 says “There are three that testify in heaven, the Father, the Son, and the Holy Spirit, and these three are one,” but a glance at the actual reading would have been enough to inform him that passage refers to “the Word,” not “the Son.”
(11)  While there are several thousand New Testament manuscripts, most of them are medieval; fewer than 100 are “from the first few centuries CE.”
(12)  Page-numbering existed in medieval manuscripts and in ancient manuscripts, as anyone who has studied them can attest.

Other misleading statements about New Testament manuscripts abound in Barton’s book, made barely palatable by the addition of “possibly” or “perhaps.”  For instance, Codex Vaticanus is said to be “possibly” a Roman manuscript, although no basis for this is provided, and on the same page Codex Vaticanus “comes from .”  Codex Sinaiticus (almost certainly made in Caesarea) is said to be written “perhaps in Rome.”   Frankly, confusion is on display almost every time Barton attempts to go into detail about any New Testament manuscript, which fortunately does not happen much outside of chapter 12.
Barton does not need textual criticism to create tendentious justifications to reject the teachings of the Bible.  To Barton, “When we have established the oldest reading available to us, we should not delude ourselves that we have therefore got back to . . . what the author originally wrote.”  (page 292)  What this means in practice is illustrated by a comment he makes on page 425 about Matthew 28:19, where Jesus instructs His disciples to make disciples of all nations, baptizing them in the name of the Father and of the Son and of the Holy Spirit.  This passage that is overwhelmingly supported by ancient manuscripts and early patristic citations; yet Barton says:  “This passage is widely suspected of being a later addition to the Gospel,” and (on page 327) “Many scholars think this command has been added in the light of the later doctrine of the Trinity.”  Thus skepticism becomes its own foundation.  He might as well have said, “My friends and I at Modern Church just don’t want to believe that.”  For someone who has studied the Bible as a career, Barton certainly seems eager to find excuses to ignore (and replace) its teachings.
Once there was a time when being taught at , and teaching at , commanded respect.  Nowadays it demands suspicion – not only of heresy, but of a lack of basic competence.  John Barton’s embarrassing failure to grasp basic data about the materials relevant to New Testament textual criticism is a demonstration of this sad fact.

But people who don't have time to read self-published articles like this one are probably wasting their time reading Barton.

Thanks James for exposing the textual heretics.

Barton sounds perfect for a guest post on another blog. ��