Sir Thomas Bodley (1535-1613) was the namesake of the second-largest library in :  the Bodleian Library, on the campus of .  This is the Hotel California of libraries; once a book enters the Bodleian Library, it can never leave.  The library currently contains over 12 million books, plus hundreds of pictures, sculptures, coins, and one stuffed crocodile.
It is also home to many Greek manuscripts – mostly ancient classical works – including some Greek New Testament manuscripts.

Codex Laudianus (Ea, 08) is the most important Greek New Testament manuscript in the Bodleian Library.  It is a manuscript of the book of Acts, probably from the 500s, written in matching columns of Latin and Greek on each page.  This manuscript was donated by Archbishop William Laud.  It was used in Sardinia (where someone wrote a note on it, mentioning the location), and later, after being taken to England, it was used in the early 700s by the notable historian, theologian, and translator known as the Venerable Bede, who mentioned many of its unusual readings, including downright unique readings in Acts 4:10, 5:30, and 7:16.
Codex Laudianus is the earliest extant Greek manuscript that contains Acts 8:37, on fol. 70v, (although the verse was used in the 180’s by Irenaeus in Against Heresies 3:12:8, by Cyprian in the mid-200s in Testimonies 3:12:43, by Augustine in Sermon 49:11, and by some other patristic writers, and is found in the Coptic Glazier Codex (G67)).  Textual critic David C. Parker has commented on some corrections in this manuscript.

This manuscript received some attention from Orlando Dobbin in his 1854 book about Codex Montfortianus on page 29; Dobbin noted that it supports “Lord and God” in Acts 20:28, “God was manifested” in First Timothy 3:16, and the non-inclusion of the Comma Johanneum in First John 5:7.  Another presentation of GA 57 is online, with thumbnail-pageviews.
is also home to Magdalen College MS Greek 7 (part of GA 1907) – a copy of Romans and First Corinthians. 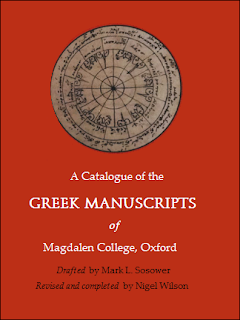 Perhaps the most famous New Testament manuscript on the premises of is Magdalen College MS Greek 17, better known as Papyrus 64, which consists of small fragments with text from Matthew 26.  The late Carsten Peter Thiede proposed that these fragments were extremely early – from the first century!  He also claimed that a few manuscript-fragments found among the Dead Sea Scrolls were the remains of New Testament texts.  The evidence for his position has been called into question by other researchers; nevertheless Papyrus 64 is unquestionably the earliest Greek manuscript of the text that it contains.  Stay tuned for a post focused on Papyrus 64, Papyrus 67, and Papyrus 4.

Earlier this year, A Catalogue of Greek Manuscripts of Magdalen College, Oxford was released.  Readers who are curious about the diverse Greek manuscripts housed at may wish to obtain a copy.

This library looks so big and the architecture of this building gives the great feeling of some movie I guess. Such a great share. KEEP IT UP