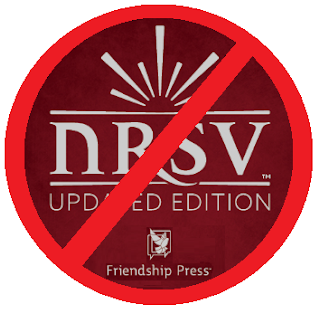 The latest edition of the New Revised Standard Version is a compromised text that should not be considered a complete Bible.  It is, instead, an example of the products made by those who  mentioned in Second Corinthians 2:17 who were “peddling the word of God.” (WEB).

If you can picture a dishonest merchant in the marketplace who waters down the liquor he sells, or a butcher who adds gristle to the meat that he advertises as the finest cut, then you may picture the sort of thing that Paul is talking about.  And the NRSVue’s translators, in First Corinthians 6:9, are guilty of committing precisely that sort of adulteration.

In First Corinthians 6:9-11, the NRSVue reads as follows:  “Do you not know that wrongdoers will not inherit the ? Do not be deceived! The sexually immoral, idolaters, adulterers, male prostitutes,[a] men who engage in illicit sex,[b] 10 thieves, the greedy, drunkards, revilers, swindlers—none of these will inherit the kingdom of God. 11 And this is what some of you used to be. But you were washed, you were sanctified, you were justified in the name of the Lord Jesus Christ[c] and in the Spirit of our God.”

The problem is the rendering at the end of verse 9:  “men who engage in illicit sex.”  A footnote in the NRSVue says “meaning of Gk uncertain.” The thing is, in real life, the Greek term here is not of uncertain meaning. The Greek term that the NRSVue renders “men who engage in illicit sex” is ἀρσενοκοῖται.  The NIV renders the same term as “men who have sex with men” and the NIV’s footnote here spells out what the term means:  “The words men who have sex with men translate two Greek words that refer to the passive and active participants in homosexual acts.”

Whether the words μαλακοί and ἀρσενοκοῖται are translated as one word, or as two words, they certainly do not mean “men who engage in illicit sex.”  The NRSVue’s rendering is inexcusably imprecise - and the NRSVue removes from First Corinthians 6:9 the meaning of the original text.  The NRSVue, in other words, does exactly what Paul warned against in Second Corinthians 2:17 – watering down the word of God.

I know not how this outrageous error happened, but I suspect the involvement of Dr. Jennifer Knust in the making of the NRSVue had something to do with it.   You can watch a 2014 video ( at  https://www.youtube.com/watch?v=FiWcxpU_isk ) – that Dr. Knust gave when she was at Boston University – in which she argues that the Bible “says nothing at all about homosexuality” and that “there are simply no straightforward sayings either condemning or promoting same-sex love in the Bible.”  Dr. Knust is listed on the Friendship Press website as “General Editor” of the NRSVue.

Dr. Robert Gagnon has discussed the NRSVue’s mistranslation in I Cor. 6:9 in 2022 in a six-minute video here, and in a 52-minute video with Joe Dallas at https://www.youtube.com/watch?v=AppoL9J7m24 and he has written on the subject at https://theaquilareport.com/an-assessment-of-the-new-revised-standard-version/ .  Dr. Gagnon speaks very clearly about what led to the NRSVue’s mistranslation in I Cor. 6:9:  it is the result of “ideological motivation.”

The NRSV, before the recent update, was already somewhat tainted in First Timothy 3:2, where its English text rendered the Greek words μιᾶς γυναικὸς ἄνδρα as “married only once,” which removed the explicit gender that is super-obvious in the Greek text; a footnote in the NRSV salvages the the NRSV’s English mistranslation by saying, “Gk the husband of one wife.”  But the NRSVue’s footnote does not salvage or clarify the NRSVue’s mistranslation in I Cor. 6:9; the translators at this point have been derelict of duty, abandoning the meaning of the original text.  They have done the sort of thing that Paul warned against in II Cor. 2:17 – adulterating the word of God.

If you desire, like Paul, to be able to tell people that you did not shrink from declaring the whole counsel of God (see Acts 20:27), then avoid the NRSVue.  From time to time I protest inaccuracies in the 1611 KJV that are echoes of inaccuracies in the KJV’s New Testament base-text (the Textus Receptus).  But it is no exaggeration to say that all of them put together are not as deceptive as this mistranslation in I Cor. 6:9 in the NRSVue.

Thank you! the nail has been firmly hit on the head! Classicists have always understood the two Greek words : only New Testament academics wish to distort the meanings. And, yes, it is not the propensity towards, but the practice of, the sins mentioned in the list, that is condemned.

This verse was examined in an anonymous blog post.
https://whitemail.blogspot.com/2006/07/peddling-word-of-god.html

Very informative! Thanks James for pointing out the issue.

Peter Heck did a post about this too https://peterheck.substack.com/p/denying-gay-people-the-full-counsel .
I guess this is the result when the publisher decides that the goal of Bible publishing is "to deliver an accurate, readable, up-to-date, *and inclusive* version of the Bible. It also continues the work of offering *a version as free as possible from the gender bias inherent in the English language*, which can obscure earlier oral and written renditions. The NRSVue, like the NRSV, follows “in the tradition of the King James Bible, [introducing] such changes as are warranted on the basis of accuracy [sic!], clarity, euphony, and current English usage, . . . as literal as possible, as free as necessary” (NRSV’s preface “To the Reader”)."

In 1973, The British and Foreign Bible Society (now renamed The Bible Society) issued its well-received volume, “The Translator’s New Testament”. Even then, before the modern chicanery, they knew how to translate the Greek, “ουτε μαλακοι, ουτε αρσενοκοιται / oute malakoi, oute arsenokoitai” - “men who submit to or practice homosexuality”.

This translation is the one used in the Berean Study Bible. Excellent

The Berean Study Bible had:
“Do you not know that the wicked will not inherit the kingdom of God? Do not be deceived: Neither the sexually immoral, nor idolaters, nor adulterers, nor men who submit to or perform homosexual acts,”
‭‭1 Corinthians‬ ‭6‬:‭9‬ ‭BSB‬‬
https://bible.com/bible/3034/1co.6.9.BSB