Palladius of Ratiaria:  ever hear of him?  Probably not:  his name does not appear among the Latin Church Fathers cited in the 4th edition of the UBS Greek New Testament.  There was a man named Palladius who preached the gospel in in the early 400s, before Saint Patrick – but Palladius of Ratiaria, in about the same period (late 300s-early 400s) was in a far different region, where is today.

Before the Council of Aquileia in 381, Palladius had served as bishop, but at that council Palladius and Secundianus, another Arian bishop, were removed from office by the other bishops at the council.  Their chief theological opponent was the famous Ambrose of Milan.

In an early fifth-century manuscript kept at the National Library of France – Manuscript Latin 8907 – several early theological works are preserved, including Hilary of Poitier’s De Trinitate, Contra Auxentium, and De Synodis, and the first two books of Ambrose of Milan’s De Fide.  Also in MS Lat. 8907 is a record of the proceedings of the Council of Aquileia.  Remarkably, this manuscript, produced in the early 400s, preserves writings and records of events from the 300s.

In part of the margin of MS Lat. 8907, there is what has been titled the Dissertation of Maximinus Against Ambrose, or “Arian Scholia on the Council of ,” which mostly constitutes a critique of the proceedings of the Council of Aquileia from an Arian point of view.  The modern-day author William A. Sumruld describes the second part of the Arian scholia like this:

“The second major block [of scholia] is separated from the first by a gap of twenty-four pages.  It begins with two extracts from Ambrose’s De Fide, each followed by a reply ascribed to someone called Palladius, probably Palladius of Ratiara (condemned at the council).  The second reply of Palladius is followed by an Arian account of the council’s proceedings, still addressing Ambrose directly in a tone of protest and ending with an appeal for a new hearing before the Senate at .  It portrays Palladius and Secundianus as confessors of the faith faced with a false bishop, Ambrose, and a band of ignorant conspirators.” (p. 154, Augustine and the Arians, © 1994 Associated University Presses Inc.)

The material from Maximinus (and his sources, including Palladius) in the margin of Latin MS 8907 thus forms an interesting witness to Arian theology in the first half of the 400s.  Roger Gryson edited this material in 1980, with a French translation, in Scolies Ariennes sur le Concile D’Aquilée – Introduction, Texte Latin, Traduction et Notes, replacing an earlier (1899) edition of Maximinus’ dissertation against Ambrose by Friedrich Kauffmann.

There are plenty of appeals to the New Testament embedded in the portions of the margin of MS Latin 8907 attributed to Palladius.  Some New Testament passages that are utilized in one way or another include: 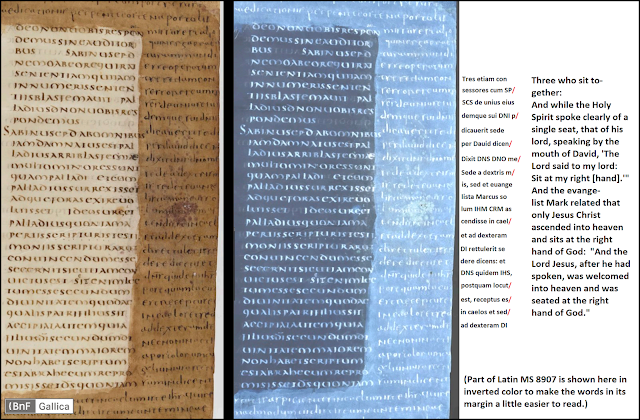 Gryson translated this as:

I am not fluent in French but I think that in English this yields something like:

”Three who sit together:  And while the Holy Spirit spoke clearly of a single seat, that of his lord, speaking by the mouth of David. “The Lord said to my lord:  Sit at my right.”   And the evangelist Mark relates that only Jesus Christ ascended into heaven and sits at the right hand of God:  “And the Lord Jesus, after he had spoken, was received into heaven and was seated at the right hand of God.””

Whatever improvements might be made in this English rendering, this is a clear citation of Mark 16:19.  I suggest that Palladius’ existence, and his utilization of Mark 16:19, should be acknowledged in the textual apparatus of the UBS Greek New Testament, and in the textual apparatus of the Nestle-Aland Novum Testamentum Graece.