The history of the Armenian New Testament began in the early 400s; the scholar Mesrop Mashtots (also spelled Maštoc) designed the Armenian alphabet and used it in the production of a translation of the Bible, beginning in 406 with the book of Proverbs, and finishing in 411.  Working with him in this task were other scholars including Sahak (Isaac) the Parthian and  Eznik of Golb.
The initial translation is generally thought to have been based on a Syriac text.  Twenty years later, though, when Eznik and other Armenian scholars returned to from the Council of Ephesus, they brought with them a cherished Bible which had been obtained in .  Recognizing the superiority of this newly available resource, the Armenian scholars revised their translation so as to bring it into conformity with the Greek text.  This revision was completed by 440.
Before moving on from the lifetimes of the first generation of Armenian translators, we should realize that the Armenian version of the New Testament had a prehistory.  Prior to the introduction of the Armenian alphabet, was already a Christian nation.  Just as the Armenian city of pre-dates , the adoption of Christianity as the official religion of pre-dates the official adoption of Christianity in any other nation.
In the late 200s, King Trdat (Tiridates)   persecuted and imprisoned the Christian preacher Gregory the Illuminator (257-331), and oversaw the martyrdom of some of his fellow Christians.  In 301, though, when Trdat recovered from a mental disorder after Gregory was brought to him and prayed for him, Trdat was converted, and proceeded to sponsor the evangelization of his people.
The message of Christ circulated in Armenia for over a century before it was written down in the alphabet devised by Mesrop Mashtots.  The echo of Syriac texts did not die out the instant that the initial Armenian version was revised, and it shaped both the Armenian canon and some aspects of its text.  The text known as Third Corinthians, for example, which was part of a Syriac text of the Pauline Epistles, was also included in the early Armenian canon.  Likewise Revelation was not initially in the Armenian canon, but was included later.

The transmission-stream of the Armenian New Testament in the 400s-600s was a racetrack on which the text of the initial translation (from Syriac) and the text of the revision (from Greek) were in competition – and readings from one sometimes rubbed off onto the other.
In the early Middle Ages, Armenian scholar-monks spread the Armenian version wherever they went – and they went throughout Eastern Christendom:  to , to , to , to St. Catherine’s, to Mount Athos, and so forth.  Occasionally the Armenians compared their Armenian Scriptures to local standards and adjusted their text accordingly.  In the later Middle Ages in (southeastern ), the Latin Vulgate – the text of the nearby Crusader States – influenced the Armenian text, resulting in the introduction of some readings that are conspicuously absent from earlier copies. 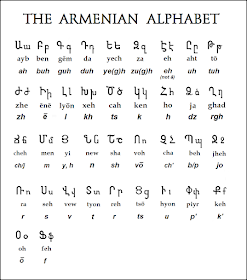 (1)  Gospels of Queen Mlk’ē (San Lazzaro MS 1144/86), produced in 851.
(2)  The Lazarian Gospels (Matenadaran MS 6200), produced in 887.
(3)  British Library Add. MS 21932, produced c. 900.
(4)  Gospels of the Priests (Walters MS 537), produced in 966.  This is the earliest substantial Armenian manuscript in the Western hemisphere.
(5)  The Cughrut Gospels, produced in 974.
(6)  Matenadaran 2374, produced in 989.  This manuscript was formerly identified as Ejmiadsin (also spelled Etchmiadsin) 229.  A black-and-white facsimile is online.  It is known for its inclusion of an unusual form of the pericope adulterae (John ), and for the note “The elder Ariston” added between Mark 16:8 and Mark 16:9, and for its four illustrations, and for its ivory covers, which may have been obtained from its exemplar.
(7)  San Lazzaro MS 123/68, produced in the 900s.
(8)  Gospels of Adrianople, produced in 1007.
(9)  Matenadaran 10434, produced in 1069.  The colophon of this manuscript states that its exemplar, according to a tradition, had been made by Mesrop Mashtots.
(10)  British Library Add. MS 19727, produced in 1166.
(11)  The Red Gospels of Karahissar/Ganjasar (, Goodspeed Collection MS 949), produced in the 1100s or early 1200s.  Ernest Colwell made a detailed study of the text, illustrations, and liturgical marginalia in this manuscript in 1936.
(12)  Gospels of Keran, produced in 1265.
(13)  The Gladzor Gospels (UCLA Armenian MS #1), produced in the 1200s.
manuscripts are listed at Dickran Kouymjian’s online Index of Armenian Art.  In addition to these codices, a multitude of ancient Armenian fragments have been collected from the bindings of later manuscripts.  Perhaps the most interesting early fragment is MS Arm. N. 640, a papyrus housed in the National Library of France.  In this non-Biblical fragment from the 500s, the text consists of Greek words transliterated in Armenian letters.

Different Armenian manuscripts display different kinds of lettering, roughly analogous to the difference between uncials and minuscules in Greek manuscripts.  The earliest Armenian manuscripts have erkatʻagir lettering.  (This term means “iron letters.”  Some researchers have suggested that this name implies that this script was used in metal-working, but a more likely origin is that it expresses its first developers’ hope that this alphabet would endure for a very long time, like iron.)  Manuscripts from the 1100s and later – especially after the 1200s – usually have bolorgir lettering, which is rounder and smaller than the erkatʻagir script.
The relationship between the Armenian erkatʻagir and bolorgir scripts is probably similar to the relationship between the Greek uncial and minuscule scripts:  the erkatʻagir script existed first, and the bolorgir script developed later, in the 900s.  The theory that both scripts developed side-by-side cannot be ruled out; the earliest substantial Gospels-manuscript, written in erkatʻagir lettering, is from the mid-800s, and a bolorgir script was used in a non-Biblical manuscript only a century later.  However, the paucity of evidence before the 800s only allows, rather than supports, such a theory.
The third kind of Armenian script in Gospel-manuscripts is notrgir, which consists of cursive lettering.  In some manuscripts in which the main text is written in erkatʻagir or bolorgir lettering, the notrgir script is used in marginalia and colophons.
It is not rare for Armenian manuscripts to feature zoomorphic letters, that is, letters consisting of abstractly drawn animals, especially in the opening verses of each Gospel.  Birds often appear in the margins of Armenian manuscripts, sometimes to accompany Eusebian canon-numbers, but sometimes at random.  The Eusebian Canon-tables in some Armenian manuscripts are a veritable aviary and zoo, spectacularly decorated.

The Armenian version’s earliest stratum represents the Caesarean Text, but it has been subjected to several divergent influences.  When assessing the text of an Armenian Gospels-manuscript, several questions should be asked:
(1)  Is it written on parchment, or paper?
(2)  What script is used?
(3)  Does it contain a colophon, and if so, what does it say about when and where the manuscript was made, and by whom, and on the basis of what kind of exemplar, and under what conditions?
(4)  Does the binding contain “guard leaves” from an earlier manuscript?
(5)  Does the pericope adulterae appear after the end of the Gospel of John?  (This passage is not in the Gospel of John in most of the older Armenian Gospels-manuscripts, but was cited by Gregory of Narek in the mid-900s.)
(6)  Does it contain Luke 22:43-44?
(7)  Do its chapter-divisions correspond to the chapter-divisions of the Vulgate?
By provisionally separating Armenian Gospels-manuscripts into groups, depending on the answers to these seven questions, one can create categories reflective of different stages in the transmission-history of the Armenian version.  This task, though not complicated, is far from complete.  The bright light that promises to shine from the Armenian evidence has not yet been set upon the lamp-stand it deserves.