However, one would not need a fully developed annual cycle of lections for every day of the year in order to account for a few significant losses.  The annual observances of major feast-days -- Easter-week, Pentecost, Christmas, Ascension-Day, and memorials of the apostles and a few martyrs -- are all that would be necessary.  There is nothing implausible about the idea that regular annual observance of major feast-days was already customary in the mid-100s.

In 1900, a researcher named Charles Taylor published some finds from the Cairo Genizah (a fascinating subject for its own sake, but that's not our main subject today).  The manuscripts that he published included fragments of a Greek lectionary, containing text from Matthew 10 (and part of the lection's title) and John 20.  The production-date of this manuscript was assigned to the 500s, making it one of the earliest lectionaries (or, fragments from a lectionary, at least) known to exist. 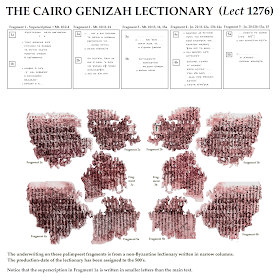